It was the summer of 2015. I just finished high school, manage to get into the university I wanted to study in and I was ready to work the whole summer so I can earn some extra money and experience, particularly on what does working an actual job really means. I applied for a job in one of the biggest pizza chains in Belgrade and a few days after that I started working. Description of the job made it sound very easy,  I had to wash some dishes, serve pizza, soda and ice cream to the customers and throw away pizzas which were out for 30 minutes. The location of my work place was in the biggest shopping center in Belgrade, so that meant a lot of customers, pizza and work.

First morning of my job I got ready and waited for the bus which was supposed to take me to the shopping center. I like the path which the bus was taking so I decided to sit on the right side of it  and to watch parks and the river Sava on the borders of which were the very first fishermen in their bouts. The park before Sava river is well known to be a place where homeless people sleep, so when I saw a big group of people sleeping on the bench, I didn’t pay so much attention. Second morning, I already decided this will be my routine, sitting in the right side of the bus, enjoying the view, but one morning I noticed a small change. The group of “homeless people” was still there but was now bigger. “Odd”, I thought.

Media back then were still silent about the migration crisis, so people were surprised by these bigger and bigger groups. Few mornings later, the group was larger than ever before. The park was overflowed by people and this was not a normal scene in Belgrade. Media then decided to speak out.

Very first reactions of people I was surrounded by were not very pleasant especially when they heard that Serbia will be the country which will give shelter to the war refugees. They were very suspicious about these people. “Thiefs! Criminals! Rapists! What are they doing here!”- I would hear. Things didn’t click for me like that. Everyday while I was passing by this park which was now home for  hundreds of people, I had a chance to see old people sleeping on the ground without any sheets or sleeping bags, kids crying because they were hungry and because of the crowd and warmness of the summer, parents trying to find last resources of the food and other supplies, people being silent in such a noise city.

One day, I was thinking about these people while getting ready to throw away a pizza which was out only for 30 minutes and then it came to me. I felt like I was going to change the world by this decision ! I went to my manager with the same pizza and said to him: “Hey, why wouldn’t we give this leftovers pizza to refugees after we finish the second shift?” This idea sound amazing to me. With the amount of pizzas we make we could’ve have feed the whole park! “You did not started working here to ask questions. Get back to work and throw that into trash. If you try to do anything else with it, camera will see you and you will be fired.” I felt like somebody just put me into the cold shower. Not just because he refused my idea, but because I saw how people just do not care. I was so disappointed.

Many months passed, the group was still there, on the warm and sunny days but also on rainy and windy days and storms, without any shelter but just trees and tents if they were enough lucky to afford it. People were still full of negative attitude and disbelieving that refugees were here, with us. They were mad, they felt disgusted and afraid. Front pages of every newspaper where full with articles such as : “An immigrant stabbed incent pedestrian and stole their money”, “Rates of rap where never been higher than now!”, “Organized criminal on the Main bus station by the groups of immigrants”. Media was not helping them, but then, one day I saw an article in an online magazine “A Serbian boy feeding the refugees”.  The article was describing the daily routine of a boy not much older than me, and how his routine impacted immigrants. He would go every day to the bakery and buy food for the families with children but also for other families. His simple act of kindness and awareness showed other people not to be afraid and full of judgments. He was one of the first people who broke this circle of prejudices between the youth.

After a few months the group started to get smaller. Immigrants were leaving the park for good. Some of them decided to stay in Belgrade and some of them had a chance to go to other countries in Europe. Eventually the park was empty. In the upcoming months, we could only read stories in the newspapers about them finding shelters in the suburbs and local villages hosed by Serbian families, or stories about the camps set by organization for the protection of immigrants.

These days we get to see battles on the borders in the south of the Balkans between the military “protecting” the borders and immigrants’ families who are desperately trying to enter in the safe zone after having lost everything they have ever known.

The  migration crisis is not over. An increasing amount of migrations caused by war and climate change are predicted. The question for all of us remains: Are we ready to be brave as this boy who showed kindness to people when they most needed it or are we going to be silent and do nothing about it? If we do decide to ignore it, thinking it’s not in our power to change something and improve the system which treats the upcoming refugees, then we should start asking ourselves when did we agree to lose our humanity. 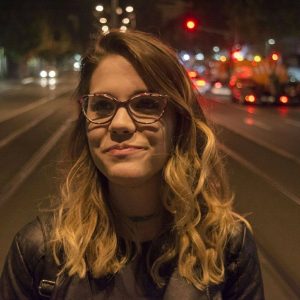 Jelena Aleksić is an ecology student from Belgrade and a member of Ecosprinter Editorial Board . She joined Serbian Green Youth in 2017. Her hobbies are ice skating and long walks with her dogs. She is passionate about environmental topics such as climate change, global warming and air pollution.