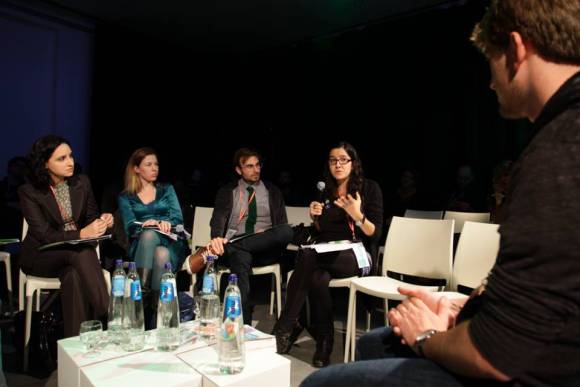 Last weekend, the European Green Party celebrated its Autumn Council, focused on how to achieve a better Europe. Saying “focused on the European elections” would not do justice to what felt like a real exercise of self-evaluation and a spirit which was more creative and pragmatic than media-focused. The Council was also used to launch a huge experiment: the #GreenPrimary – which did have a more “American show” style to it.

The first part of the Council concentrated on the EGP common manifesto: the common basis for the proposals by the different Green parties in Europe (including EQUO in the case of Spain). But here we did not have a pompous presentation, of big promises and statements designed to become tweets or newspaper headlines, but instead something a lot more useful. Representatives of NGOs, governments, associations and businesses were invited to debate the content of the manifeso draft – and especially topics or proposals to add, improve or change.

Other debates in parallel included participants from the European Seed Association, the German Federation of the Green Industry and the European Environmental Bureau. Maybe something shocking for a political congress, the plenary summarising all the parallel debates was not about “how good we are and how much we know”, but rather about what was missing in the manifesto, what debates needed more work, what challenges we still had to face.

As well as the topic-based debates, at the Council there were senators, members of national and the European parliaments, ministers and people from the European Commission, to debate the balance between local, regional, national and European level and how to achieve the best impact at each level.

The Council was also useful to allow the various Green parties in Europe to coordinate efforts and exchanging ideas to maintain and strengthen a truly European spirit – in general, and especially towards the European elections in May 2014. Once more, it’s really motivating to see politicans and citizens from the Mediterranean, the British Isles, Scandinavia, German-speaking countries, Frenchspeaking countries… all around Europe, with one common understanding of the European situation and a common route for a solidary, social and ecological way out of the crisis.

Another critical part of this Council was the launch of the very first pan-European primary elections in history which, because of their political, symbolic and practical force, will have their own post. For now, if you’re interested, have a look at what the media is saying about it, and look at this explanatory video:

The Green Primary was launched with a debate between the four contenders – Monica Frassoni, Ska Keller, José Bove and Rebecca Harms – on the Friday when Council opened. Council then closed with a countdown to Sunday 10th at midday for the opening of the vote, when 16-year old Molly McKeagny from Ireland cast the first vote. 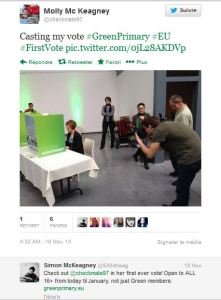 This Primary are the first big step by the European Green family towards the elections next year, and will be useful to start practicing strategies of communication and open dialogue with the people so that we can be ready politically and logistically to restart Europe.

To finish off, another thing that I was positively surprised by is the increased recognition that EQUO has (before, we used to have to give explanations: “yeah, we’re the new party in Spain, we’re only just starting…”), and especially people being impressed at our reach and activity on social media, from which other Green parties in Europe want to learn.