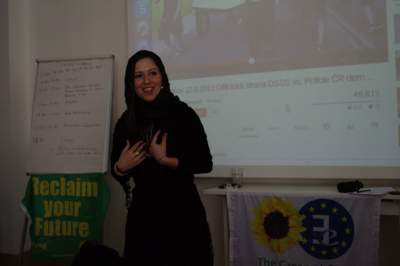 On the 8th of April we celebrated an International Roma Day.  Every year it is a great occasion to learn more about the Roma community by attending a concert or a conference. It is a one small step towards Roma inclusion, a step in the right direction, but certainly not enough.

Roma communities live in every European country and in none of their situations can be described as ‘good’. These people are often facing racism, discrimination and social exclusion. Everybody knows it, but there is still no effective strategy to change this. It is easy to ignore a minority which has no state to defend their rights and seldomly has enough capacity to fight back.

During a seminar organised by the Federation of Young European Greens in Prague in March 2014 titled ‘New Political Challenges to Youth and European Democracy’, Roma issues were widely discussed. There was a chance to meet and extraordinary person, a female Roma activist from initiatives Kořeny and Blokujeme, Ivanka Mariposa Čonková, who prepared a workshop on the situation of the Roma minority in the Czech Republic and the EU.

Why was she so extraordinary?

The European Union Agency For Fundamental Rights has conducted a survey in 11 European countries, which proves that Roma women are an especially vulnerable group. The research covered the core areas of employment, education, housing and health, as well as any other gender‐sensitive policy areas. The situation of the Roma community was different according to the country (the survey was conducted in Bulgaria, the Czech Republic, France, Greece, Italy, Hungary, Poland, Portugal, Romania, Slovakia and Spain), but one tendency was constant – Roma women were reported to be more disadvantaged than Roma men.

They go to school lest often and drop out earlier. They less often have paid work, and what follows, they are more threatened by poverty. Around 2% of Roma girls aged 10‐15 were reported as ‘traditionally married’ or cohabiting with a partner. 16% of Roma youth aged 16-17 are married and most of them are women. Roma women are also often less aware of the laws against discrimination, which makes it less probable that they will defend themselves.

Nonetheless, there she was.

Ivanka Mariposa Čonková told us how to block a nazi demonstration by organising a festival promoting tolerance. She should be our inspiration and motivation to think and act more for Roma inclusion, also when it comes to the development of the Green Idea.