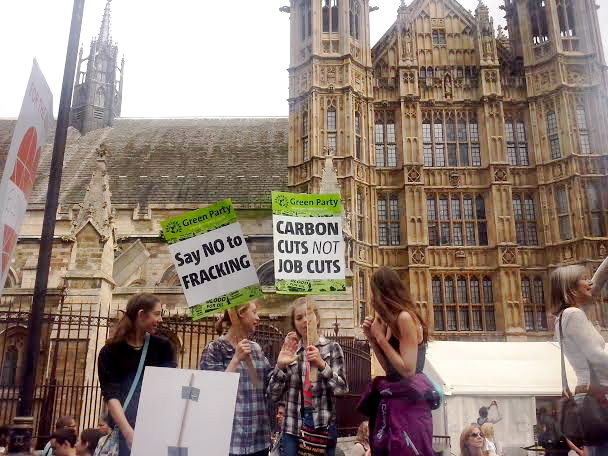 The Climate March in London – part of a global effort to make politicians once more take climate change seriously – looked impressive. It also showed the scale of alliances that are being created over this issue.

As always, I arrived late. If everything would go according to plans, I – along with my partner Adam – would have problems with catching up with the march. Luckily when we arrived about 30 minutes past schedule it was still near the Temple underground station.

We stood there for quite some time, not knowing what was the cause of the delay. We had some time to see by ourselves the breath of support and the huge amount of both organisations and individuals of all walks of life united under the climate banner.

Quakers along with monks of the Franciscan order. Feminists and anti-capitalists. Green Party members and trade unionists. All of these and many other identities – some of them merging in single individuals. 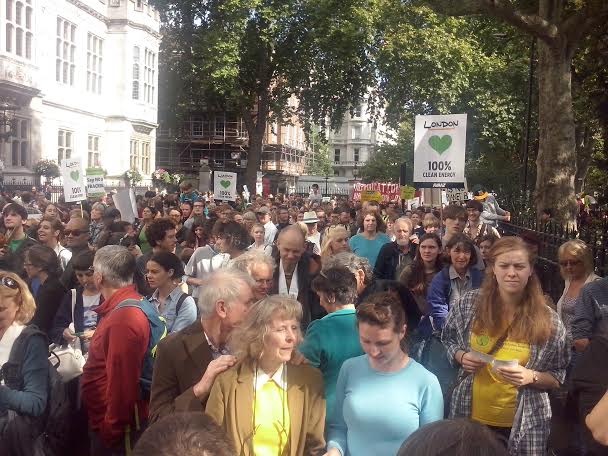 And what a view it was! For a person of 1.66 metre of height it’s not easy to assess the scale of the event that you are taking part in. At first we thought that there are maybe about one thousand people – but then we had the opportunity to climb up the stairs. There we saw not one, but many thousands of people, walking along the Thames to the Parliament Square. We barely could sneak from the end to the middle of the march.

We know that the cause for which we were marching is urgent. We also know the scale of the problem and the transition that has to be made to create a low carbon, climate friendly economy. The sad thing is that the politicians, focused on „restarting economic growth” want to return to business as usual.

From fracking in the UK to plans for expanding brown coal extraction in Germany and Poland, from bitumen sands in Canada to fights with deforestation in South America – the scale of ecological problems that this business as usual scenario creates is enormous. Change is needed.

It’s good to know that in spite of crisis and austerity people can still be mobilised to fight for the climate and to hold politicians to account. The fact that people see the connections between ecological and social exploitation is also something that brings more hope of success to the cause.

Of course one can see another part of the story that unfolded Sunday, September 21st, such as the question of strategy. How to shape the discourse over climate change in a way that resonates best with the wider public? Should it stick to the doom-and-gloom narrative or should it focus more on bringing more hope for a better future? Is a single narrative even possible – or maybe different arguments will just be more or less appealing to different types of people?

The list of such questions can of course be expanded. Some more controversial issues, ie. regarding the legitimacy of population control as a way of combating climate change – are already being discussed.

But that Sunday it just wasn’t as important as marching together for a common cause. It was especially empowering when knowing that in the city in which I live now – the Polish capital Warsaw – only a handful of people took part in the events. It’s also important for them to know that despite everything they took part in a greater, global event along with tens of thousands of concerned citizens.

Bartłomiej Kozek is a writer and green activist in Warsaw, Poland. Depending on your level of Polish, you can find and read his articles on environmental issues in the Polish press.