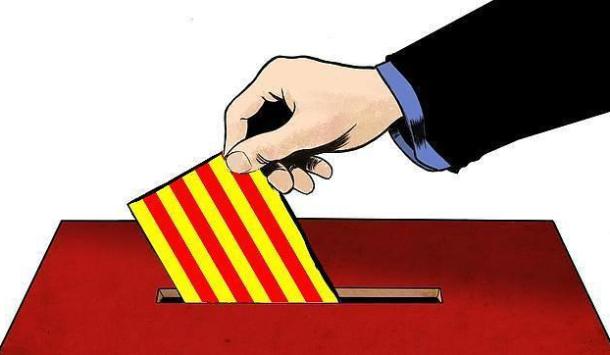 Last 27th of September there were elections in Catalonia. They were transcendental elections, as the right-winged government of Convergència Democràtica de Catalunya (CDC, ALDE in the European Parliament), led by the President Artur Mas, as well as the main centre-left party, Esquerra Repubicana de Catalunya (ERC, EFA in the EP) —both of them in a government agreement since then—, considered these elections as a referendum on Catalan independence from Spain. The anti-capitalist Eurosceptic leftist party Candidatura d’Unitat Popular (CUP) agreed with them, but also adding that these elections were constituent of the new Catalan Republic.

On the other hand, the Partit Socialista de Catalunya (PSC, S&D in the EP), Partit Popular (PP, EPP in the EP) and Ciutadans (C’s, ALDE in the EP) considered these elections as just normal regional elections.

The green-left coalition of Iniciativa per Catalunya – Els Verds (ICV, EGP in the EP) and Esquerra Unida i Alternativa (EUiA, GUE/NGL in the EP) viewed these elections as constituent but not as a referendum, as they argued that elections are something more than discussing about the organization of a country —accountability of the previous government, social needs, etc.

Do you feel dizzy with names already? We have not begun yet, so keep calm and breath. Are you ready? So let’s speak about the elections. There were two main “alliances” during the campaign: the independentist parties Junts pel Sí —a coalition of CDC and ERC plus members of the civil society— and CUP; and the anti-independentist ones —without any reform of the current territorial organization— PP and C’s.

Also, the PSC was in favour of the independence neither, but it proposed a federal reform of the Spanish Constitution. And, finally, there were us, the green-left coalition, or “confluence”, Catalunya Sí Que Es Pot —formed by ICV, the leftist PODEMOS, the Green EQUO and members of social movements such as Lluís Rabell, former president of the Barcelona’s Neighbour Union. We were defending an eco-social political programme; a referendum on independence and a constituent process for Catalonia —process of refunding itself far away for the right-winged elites who have ruled from Madrid and Barcelona during decades.

Now we have the players already, let the game begin. The election campaign was really aggressive from all sides, from left to right, independentists or otherwise. Anti-independentists used international leaders —from Obama to the European Commission— to show that Catalonia’s independence had no future. Independendentists used the massive pro-independence demonstration of the National Catalan Day to show they had the “people’s support”, but they also tried to involve civil society in symbolic “civil candidacies”.

We, the green-left coalition, tried to build a consensus within this polarised debate with a referendum proposal, what we viewed as the unique option to solve the identity conflict. That was accepted neither by anti-independentists —who did and do not want to ask the citizenry about anything— nor by independentists —who argued the referendum was impossible when “we” tried to negotiate it back in 2012. For them, these elections were, actually, the referendum the PP —“Spain” for Junts pel Sí— did not allowed Catalonia to do.

Moreover, our focus of the campaign was to give the voice to movements silenced by the cuts —public health, education, youth— of the neoliberal government led by Artur Mas and fight for them. We tried to speak about feminism, a greener environment and a fairer economy for everybody. And, of course, about the corruption inside CDC —whose founder, former Catalan President Pujol, was involved in a millionaire scandal.

We also denounced that Artur Mas was hidden in the 4th position of his electoral list. Why? Because he was the candidate for the presidency proposed by Junts pel Sí. He, as Catalan education and health systems know well, is one of the most severe “austericid” Presidents in Southern Europe. And the first one who has not given an account to the citizenry for that. 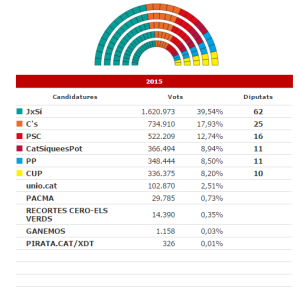 The first thing one should realise from the elections is that they mobilised people. A lot. The participation was the highest one ever in the Catalan democracy (was roughly 80% and, normally, it is about 60%).

The results were nevertheless not quite surprising. There was a polarised campaign with the yes/no on independence, and so should be the results. Junts pel Sí get 62 MPs, while C’s get 25, PSC 16, Catalunya Sí Que Es Pot 11, PP 11 and CUP 10, 135 seats in total. That is a polarised Parliament, because independentists get 1,900,000 votes, while anti-independentists scored 1,500,000.

That was a victory of the independentists, although the anti-independentists represent a non-negligible margin of the society and there were also votes like those in Catalunya Sí Que Es Pot which cannot be counted as a “yes” or as a “no”. So the only answer for that kind of society after these elections should be a referendum to let the vote be cast from the whole citizenry. There is a problem in Catalonia with the current administrative jurisdiction, and it must be solved by democratic means.

More important, a citizenry affected by austerity and neoliberalism of the five years term of the former President cannot wait forever for a solution which never arrives. Now we all are supposed to wait 18 months to be “independent from Spain”, but at what cost?

At the cost of having the more liberal-winged Parliament in Europe: Junts pel Sí and CDC, with its leader Artur Mas being considered right now as a President, “versus” C’s. So the government and the main opposition party are, at the end of the day, in the same European Party. For the first time in our history, the Government and the “Head of the Opposition” will be right-winged and pro-austerity. What balance of power will that be when we will not have a true public discussion of social and civic issues rather than the national —Spanish or Catalan— speech?

There cannot be a true end of the “independence process” on the following months, neither with an independent Catalan state nor with a region of Spain. We have tried to explain that point during the whole electoral process, even before: achieving independence —or not— will imply a long, deep and honest debate. Unfortunately, right now we only have the certainty that this re-elected Government will continue developing social cuts.

And what is more worrying: cuts hidden under the independentist flag? Cuts that are being made even now before the ratification of the new government in the Parliament? “The vote of our life”, as they said during the campaign. Certainly.

Marc Martorell is a member of Joves d’Esquerra Verda (Catalan Young Greens) and a coordinator of the FYEG’s Democracy Working Group.