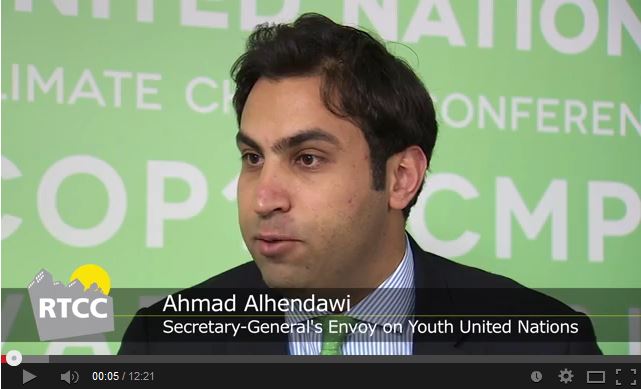 COP19 (16/11/13) – Ahmad Alhendawi the Secretary-General’s Envoy on Youth arrived in Warsaw this week to work with Youth NGO’s (YOUNGO). He is joined in this interview by YOUNGO member Antonius Magnus Jaekel.

He speaks about the inspiration he feels by the work that young people are doing in the climate change movement.

One of his professional goals was to meet with YOUNGO and engage them in next years Climate Summit being hosted by the Secretary General Ban Ki Moon. He worked with them at COP19 to discuss what their access to the summit could look like.

He also speaks about how impressed he is about young people’s bid to have wider representation at these talks, particularly from the Global South. He hopes to work on representation of youth for next year’s talks in Lima.

He discusses young peoples engagement in the political process saying that changes need to occur to engage young people and that although society is moving into the digital age politics has stayed in the analogue.