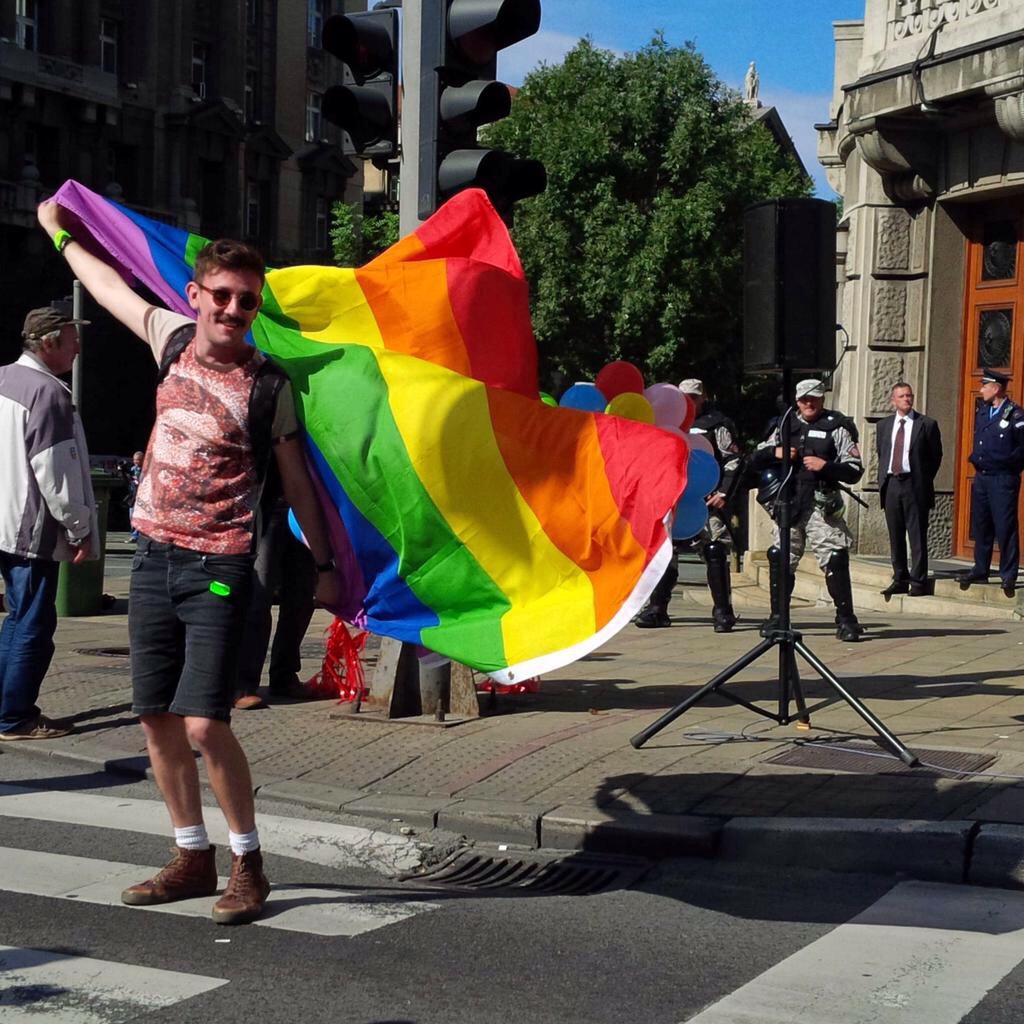 After 3 years of being banned, and already having a pejorative image of “that thing that is traditionally canceled” Belgrade Pride (in further text Pride) happened on the 26th October 2014, without major incidents and with the presence of approximately seven thousand heavily armed policemen. Before the actual Pride itself, there was a “Pride Week” that was imagined as a full week series of cultural events for LGBT related content – promotions, exhibitions, and debates about sex workers, bisexual people, HIV stigma, trans community and butch lesbians. The character of these events was emancipatory but it was turned towards the community itself, or better yet, a niche in the LGBT community that was already open enough to attend events that are closely related to Pride. The outreach towards general public, political figures and the majority of members of LGBT community was insignificant. Although full of content, Pride Week failed the cause to sensitize the community and general public and provide for the coherent info and promote demands that are publicly displayed on the website of Belgrade Pride.

Now that Pride is generally characterized as “successful”, there are some important questions that demand answers: What were the actual political messages regarding Pride?  Who benefits from Pride? What drastically changed in a year to make Pride an option for Serbia? and of course How  successful was Pride?

Before we start answering the questions, it is very important know who’s in charge of organizing Belgrade Pride. The association called “Pride Parade Belgrade” was registered on the 16th of October 2010. This association was founded by two men from Queeria Center who were participating in the organization of Belgrade Pride 2010 along with the Gay Straight Alliance which initiated and was the main carrier of the Pride that year. Founding of this association was kept in secret from all the other organizations that were participating in the organizational committee  of The Pride in 2010. Ever since 2010, Pride Parade Belgrade has been in charge of organizing the Belgrade Pride and has so far not invited any other participants into the organizing committee, and has never invited LGBT community to consult about the political messages of the Pride. 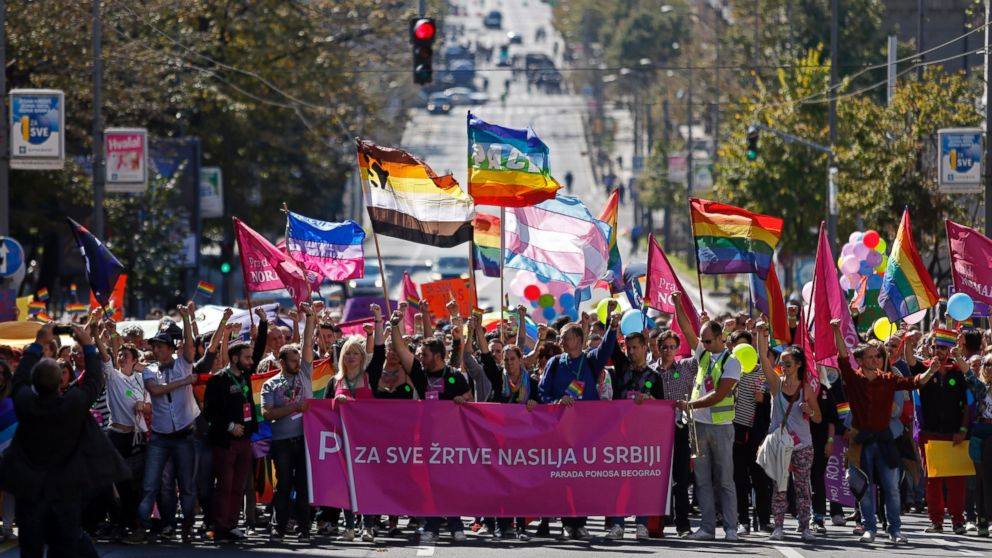 THE ACTUAL POLITICAL MESSAGES REGARDING PRIDE

At the website of Belgrade Pride there are many demands aimed primarily towards legislative changes that will improve the safety and equality of the LGBT community some of which were: pressure towards the legal processes that are ongoing; pressure towards prosecution of everyone that has broken the Anti Discrimination Law; adoption of National Strategy Against Violence with emphasis on specific forms of violence aimed towards the LGBT community, among other things.

There was a lot of media coverage in the heat of the moment, but most of them were not actually mainstream media with national frequencies but instead online and foreign media. The messages sent by people who were randomly interviewed stated that it’s not (just) about the LGBT community but instead freedom for all and everyone equally, others were just happy to be “creating history” and the Mayor of Belgrade, Siniša Mali stated that this is the chance to send a clear and strong message that Belgrade is “an open city where everyone is equal, and that everyone is safe no matter where they come from.”

At the end of Pride, the main organizer, Boban Stojanović thanked the attendees and said that they are “the love of the city”. After that he invited his partner to share a kiss on stage and show to everyone that “it’s not a big deal”. 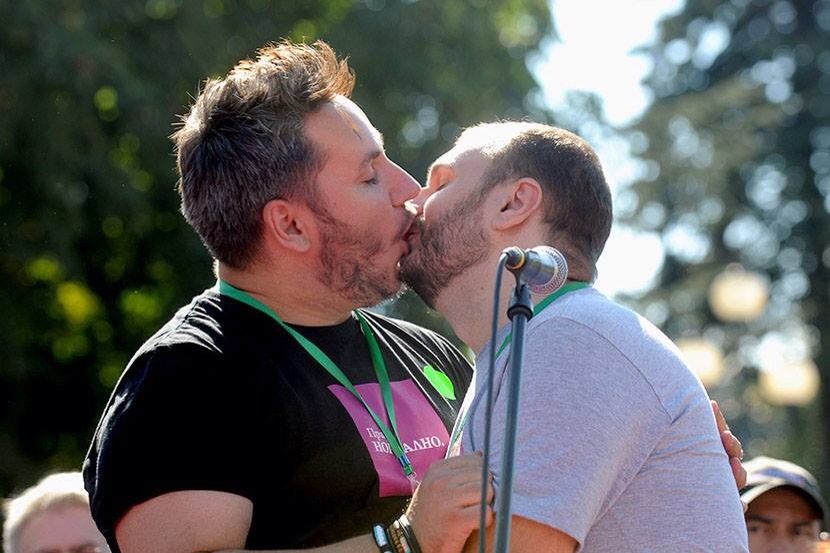 On the other side of the coin there are the opposers of Belgrade Pride, led by the representatives of “Dveri” (The Doors), an extreme rightist nationalist party, and Serbian Orthodox Church,  who gathered both the night before and just after Pride. Their messages were clearly intolerant and bigoted – the LGBT community is against “family values” and not welcome in Serbia; children want both a mother and a father; God created Adam and Eve, not Adam and Steve; LGBT individuals should stay “Inside the four walls” and not display themselves in public. A few thousand people gathered the night before Pride, as well as a traditional Moleben, a scandalous religious ritualistic cleansing of the city performed by the priests of Serbian Orthodox Church which started in front of the Temple of St. Sava and ended in front of The Episcopal Church.

WHO BENEFITS FROM PRIDE?

If your first thought after reading this question was – “LGBT community, of course” – think twice. The community was in no other way, except formally, invited to join Pride and to actually take pride in organizing Pride. As the first time in 2010, the ratio between the LGBT participants and the non-LGBT supporters was in favor of the latter group, which clearly shows that LGBT community is not encouraged to fight for their own rights in such a way. It is obvious that the LGBT community does in no way benefit from a Pride like this. Just one day later, the LGBT topic was practically abandoned by all the local media, and nothing seems to change. On the other hand the mayor of Belgrade and Serbian Prime Minister got a tap on the back from the international community and they gained some credibility in the public as being the first ones who managed to do what was for 3 year an impossible task for Serbia, “proving” their competence.

The Prime Minister also used this situation to, once again, prove himself as a martyr who is sacrificing himself for the greater good of Serbian citizens and even used the assault on his brother to say that he is not mad at police officers who had done it because “they are frustrated for doing something they don’t like doing” as if it was not their job to protect all the citizens of Serbia regardless.

The Serbian Orthodox church also had a share of media attention in a traditional condemnation of the LGBT community, this time going a step further and openly comparing it to pedophilia. Of course, there are no indications that the Patriarch is going to be taken to court on the basis of discrimination and hate speech which are punishable by law.

WHAT DRASTICALLY CHANGED IN A YEAR

First of all, this year on the parliamentary elections Serbia got the government practically exclusively comprised of Serbian Progressive Party (the only other party in the government is Serbian Socialist Party which has a marginal influence on the government),  a party that came to existence in 2008 after the separation from Serbian Radical Party that is led by Vojislav Šešelj – the most rightist party until the appearance of Dveri. SPP completely “changed” their political program to being center right, and proEU oriented in the matter of a few years. Its current president and the Prime Minister of Serbia, Aleksandar Vučić is considered to be the biggest dictator since Milošević, and some political journalists say that his oppression and control of freedoms of speech and media censorship are even worse than during the times when  Milošević was in power.

Just one year ago Pride was banned (for the third time) with the explanation that Serbian police cannot contain the disturbers and that it cannot guarantee the safety of Pride. Then, just one year later, the Pride was held with a high presence of police special forces, a few armored vehicles and practically no organized counterattack. Miša Vacić, the leader of SNP 1389, one of the most powerful organized extreme rightist organizations publicly stated in a live show on “Pink” television that he has decided to “be a bigger man and let them walk this one time.” There are many speculations that the Serbian Prime Minister is actually in charge of these extreme rightist groups and that they exist to cause trouble when needed and to stand down when they are told.

HOW SUCCESSFUL WAS PRIDE

After covering some of the basic topics, as well as the parts of social and political context in which Pride had occurred, we could say that it has become goal for itself. For years we’ve been expecting for it to happen and we’ve criticized the lack of political will that would make it possible and so now that we had it we say it is successful just because it happened. There is no denying that it is a step forward compared to the past but it’s lacking the effects and completely ignores its potential. Compared to “Šetnjom protiv mržnje” (A walk against hatred) which also happens on a yearly level but lacks the media coverage and LGBT context that Pride itself has, it sends quite a vague and feeble political statement. The LGBT community and a vast majority of its supporters look down upon the event and feel a bitter sweet victory knowing that Pride has achieved very little for the community but has a vast number of third party beneficiaries that twisted the event for their own political gain.
In the future we are expecting Pride to reach a bigger part of the LGBT Community, to consult with it and to display a strong, argumented and above all visible, political statement. We also hope that in the future, Pride will encompass a much wider area of LGBT community such as the members of Roma and other minorities that are facing their own specific LGBT related discrimination that need to be solidarily displayed and battled against through Pride itself.