Disclosures by two of the world’s leading climate wreckers – Exxon and Shell – lay bare the growing consciousness of our new climate reality. With the impacts of climate chaos being increasingly felt, including increasing the severity and frequency of extreme weather, and forced migration, now is the time to demand what is necessary from the fossil fuel giants.

In a report from the Financial Times, Exxon were quoted as having “acknowledged that some higher-cost assets, which could be impacted by many factors including future climate policy, may not be developed”. Clearly, Exxon’s main concern is the profit motive and ability to continue making regular payments to its shareholders. If it was concerned about social, economic and environmental good, it would be radically overhauling its operations already to reindustrialise towards deployment of renewable energy and building more climate resilient energy networks.

BusinessGreen recently reported that the CEO of Shell, Ben van Beurden, said “There are plenty of questions facing our industry …I believe the biggest of them is climate change.” Commitments made by the majority of human civilisation at the Paris climate negotiations in 2015, resulting in the Paris Agreement, signalled to some a seismic shift in what society is willing to do to tackle one of the worst crises to ever face us.

On top of the corporate responsibility to deliver on climate justice as a matter of executive and shareholder conscience, there is also the economic phenomenon of stranded assets which will force the hand of the leaders of Big Oil in the near future. Stranded assets include things like proven reserves of oil and gas which must be left in the ground if national governments are to abide by their commitments in the Paris Agreement. Assets currently have a monetary value assigned to them, which is passed on to rating the overall value of the companies which own them. This means that if Exxon had two oil wells, both £1bn in value, and extracting one of them put them in breach of the Paris Agreement, they would have to leave it in the ground, thus haemorrhaging £1bn from Exxon’s market valuation.

Stranded assets aren’t just an issue for Big Oil executives and their employees – it’s an issue for all of us. Many of our pensions and insurance companies hold significant investments in oil companies which will become worthless if a significant proportion of their assets are stranded. Any responsible economist looking at a medium or long-term outlook would be advising the oil companies to immediately revaluate their asset portfolios and consider shifting their capital internally towards low-carbon futures.

Even former body builder and Governor of California, turned global environmental activist Arnold Schwarzenegger said in March 2018, “The oil companies knew from 1959 on, they did their own study that there would be global warming happening because of fossil fuels, and on top of it that it would be risky for people’s lives, that it would kill.” He was speaking as he announced his decision to ‘sue Big Oil for first degree murder’. It’s worth noting that Schwarzenegger is a Republican, a party which is traditionally in thrall to the climate science denial lobby.

The website for the incoming presidency of the international climate negotiations says “One of the most important tasks of [COP24] will be to work out and adopt a package of decisions ensuring the full implementation of the Paris Agreement”. As young people in the climate movement growing up in a rapidly warming world, where older, often more privileged people have abdicated responsibility for the crisis, it is left to us to ensure that those decisions reflect the scale of the challenge ahead.

The growing chorus of companies and other Establishment figures publicly recognising the crisis and pointing the finger of blame at those responsible for it, present a potential tipping point in the climate movement. Either we as ambitious activists can let them capture the narrative and allow them to appear as though as their policies and corporate activities and profits are all acting in line with environmental justice, or we can seize on this moment to demand a habitable planet. 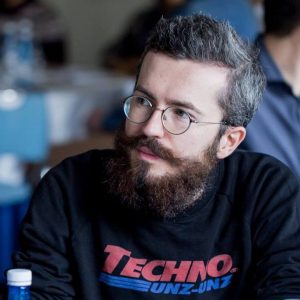 Tom Pashby is an elected member of the Green Party Executive for England and Wales. They work in their day job in the pan-European communications team at EIT Climate-KIC and write regularly on politics. You can find previous work on tompashby.wordpress.com. Tom was the International Spokesperson for Young Greens of England and Wales. This piece was written in Tom’s personal capacity.