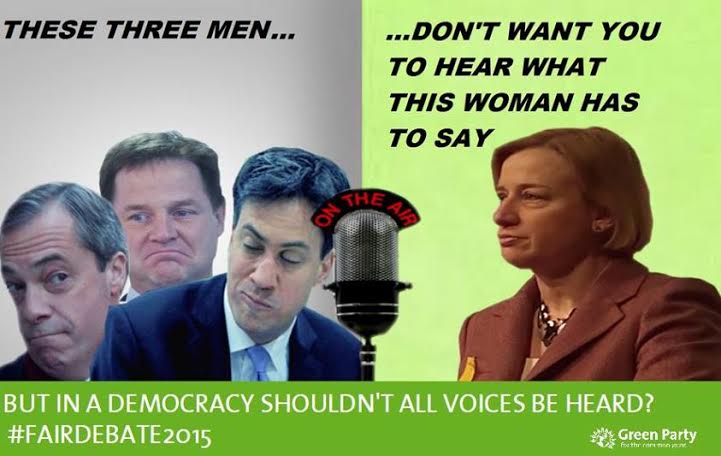 The main broadcasters announced their plans for the televised General Election debates this week. And it was a scandal.

The three separate debates will see Labour’s Ed Miliband and Conservative leader David Cameron go head to head in one debate, with the second being the same, but including the Lib Dems’ Nick Clegg, and the final debate adding UKIP leader Nigel Farage.

The controversial line-up became under fire from excluded parties, including the Green Party, the Scottish National Party and the progressive Welsh party Plaid Cymru. Natalie Bennett, Green party leader, declared this week that the Greens ‘must be in the Leaders’ Debates’, explaining that without us ‘It would represent a huge failure by the broadcasters to meet the democratic aspirations of the British people.’

There is no real reason for the exclusion of the Greens, over UKIP, as they both possess the same number of seats in the House of Commons – and triple the number of MEPs as the Lib Dems (three, to the Liberals’ one). We’re regularly polling equally to the Lib Dems on around 7%. So why have UKIP come out on top in the invitation list?

With the denial of some parties by broadcasting corporations, it seems obvious that their priorities lie with the entertainment values of the leaders’ debates (while ensuring all the parties are pro-austerity) and not with conveying to the people of Britain the reality of their future that they will decide in May next year. Are the broadcasting companies trying to rebuild these important debates as money-making schemes?

Ric Baily, the chief advisor on politics for the BBC, said that the decision was “fair and realistic”, despite a poll by YouGov, which found that 47% of voters would like to see the Green Party leader appear along side Nigel Farage, providing yet more evidence for the statement Natalie Bennett made in her article in The Huffington Post; ‘Democracy demands’ the inclusion of the party in the TV debates.

Since the broadcasters have made no change to their plans, the Green Party have threatened legal action, unless a valid explanation is given for the unfair exclusion of the party. Additionally, many who feel the same about this arbitrary decision have taken to online petition site, change.org, asking broadcasters to “Include the Green Party in the TV Leaders’ Debates ahead of the 2015 General Election”. It has in a few days attracted over 170,000 signatures. 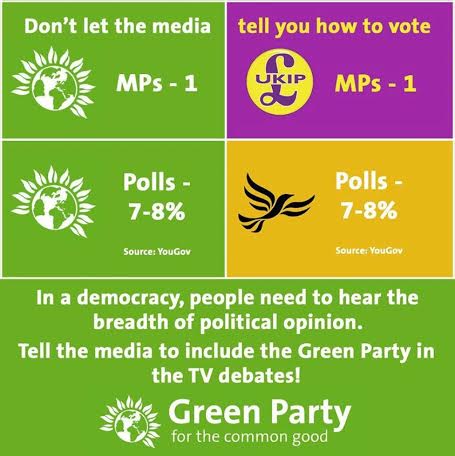 To counteract the shocking exclusion of the party, the Young Greens have launched a project to set up a ‘young leaders’ debate’, which involves young members of each party’s youth organisation, holding their own TV debate, mainly focusing on issues that affect young people.

Firstly, this proposal is one of great potential opportunity; young people can become more engaged in debate and politics. Plus, politicians and the public alike can hear the voices of the many politically engaged youths across the country. It also introduces diversity amongst the debates between the parties, as it includes all parties, and not just the four ‘main’ ones.

The purpose of the Leaders’ Debates is to share a wide range of options that the British people can take in – and these options will affect their future. But if the people of Britain are to decide their future, surely they should know the actually options they’re open to?

Sign the petition to include the Green Party in the TV debates here: www.change.org/p/bbc-itv-channel-4-sky-include-the-green-party-in-the-tv-leaders-debates-ahead-of-the-2015-general-election

Jake Moran is a member of the Young Greens of England and Wales.