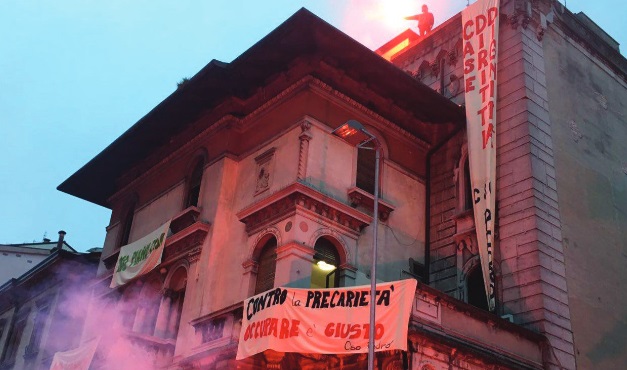 Is was 2014, and I had been living in Italy for only a month. One evening, some university classmates invited me to join them for a party at the nearby social centre—a centro sociale. I was unfamiliar with the concept, and imagined something like the YMCA, where children played basketball and elderly people did water aerobics. Were we going to a pool party?

That idea was immediately abandoned when I learned that we were going to a concert, at a space that was once a butcher shop, but now occupied by squatters. Squatters? Oh no. I imagined windows with the glass smashed out, no heating, and an evening ruled by dangerous leaders of anarchy.

This ridiculous dystopian vision is proof enough that I grew up in North America, where squatting is illegal (unless visibly occupied for twenty years, so basically impossible) and on the same level of societal taboo as joining a cult.

So, that evening when we rolled up on our bikes I was taken aback by what I saw, and felt stupid for my previous assumptions and total naiveté.

It was a small space in a residential neighbourhood, just outside the centre of Padua. Entering the room, because it really was just one room, we found people dancing and chatting on sofas. In the corner there was a bar about the size of a card table. The people were entirely normal and welcoming, and there was obviously a feeling of collective existence in this sweaty space.

That night my education in centri sociali, or as Wikipedia calls them ‘self-managed social centres in Italy’ began. As I visited more of these spaces, the things I saw and heard made me want to propagate the concept elsewhere, particularly across the ocean to North America–which is why I feel inspired to write about what I have learned.

I soon realized that diving into this topic was like opening an endlessly deep can of worms, and no short article will ever do justice to the impact of these spaces on local social rights and representation. Let this be then, an outsider’s brief and generalized deconstruction of these created spaces, where citizens are given a platform and support system to advocate for their own place and rights within society.

The universal law of cause and effect argues that for every effect there is a definite cause – and for every cause, there is likewise a definite effect. Centri sociali develop as a response to a disproportionate social system, in which favored groups are equipped with the possibilities to experience a life free of barriers, and unfavored groups are left with the challenge of navigating life in that same society with fewer resources, and as stigmatized and marginalized individuals. Indicators of identity – like wealth, race, sexuality, gender orientation, country of origin, and migration status – singularly pigeonhole individuals into this ‘unfavorable’ societal group.

United by feelings of frustration, a lack of belonging, and a hope for a fairer future, these individuals bind together, and a centro sociale is born.

It is best to think of these spaces as living entities, in constant evolution thanks to a multitude of in-puts, including culture, geography, and politics at all levels. The individuals participating are also bound to impact its narrative. In general, however, these spaces aim to reclaim their cities from capitalism and its side effects. Consider this example.

Some months after my first visit to the former butcher shop, a well-established home for migrants in a predominantly ethnic neighbourhood in Padua was closed on short notice. Many saw this act as a further step towards gentrification and a direct message to the entire community – “young, black men, you are not welcome here”. The centri sociali in the city rallied around the black, migrant community; collectively protesting against xenophobia and advocating for their right to housing. It was like a type of collective protectionism – various identity groupings within an ‘unfavourable’ societal group advocating for each other (e.g. transgendered students advocating for black migrants).

I watched those protests pass by under my balcony, struck by the impact that a group of cognizant and engaged individuals can have on the societal fabric of a city. Disrupting the seemingly permanent stamp of capitalism – and thus overturning a system that is predicated on the idea of taking space, resources, and social rights away from marginalized groups—remains an unending pursuit.

The construction of any societal space – particularly one that is dedicated to the values, aspirations, and grievances of the ‘other’ – is bound to experience a stream of successes and setbacks. That, however, is not what is important. It is the tenacity to endure and reach further, that will define our days ahead.

Laura is a Canadian/German climate and local food activist, with a love of hiking, farmers markets and endless Sunday lunches. Spreading her studies across Italy, Germany, and Canada, Laura completed degrees in Human Rights and Multi-level Governance as well as in Environment. Laura currently lives in Italy and is on the look-out for her next project. You can reach her in LinkedIn.