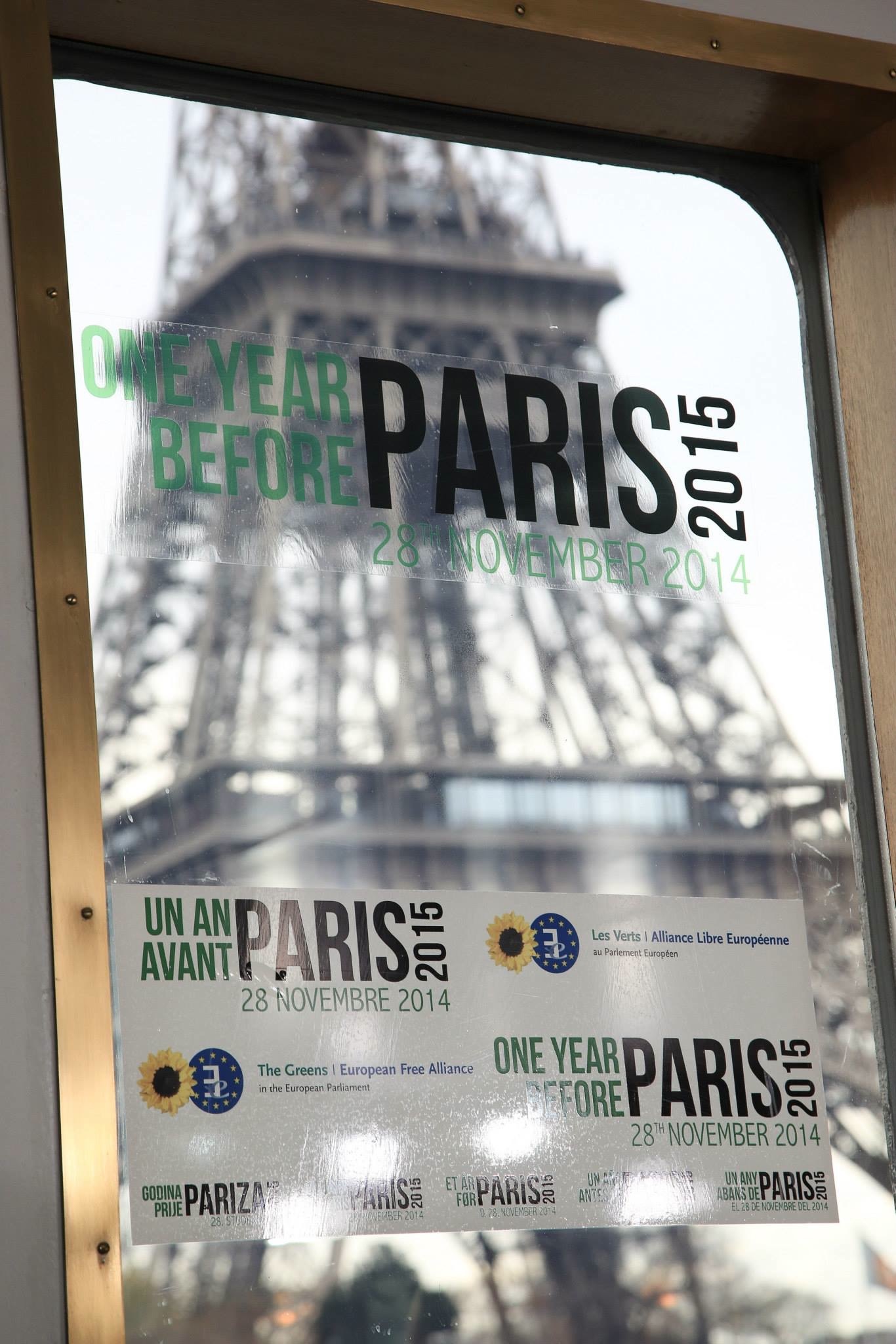 First of all, the place: as Antoine Tifine mentioned they transformed the creepy bars the militants used into a stylish barge facing the Eiffel Tower. A stylish barge for important people… First check when you arrive: are you on the guest list ? Second check: are you worthy enough to sit on the first rank ?

Anyway I come in, have the pleasure to see that some friends from FYEG came as well. Next to the stylish breakfast (bio drinks of course!) was the shitty paper presenting the conference. Certinaly not on recycled paper …

After a short time for small talk, the conference begins late (everybody might have had as much difficulty as me to find the place). Next the resentation of the panel, which at first sight, was quite representative:

The Greens Secretary General Rebecca Harms opened the conference by reminding us the current difficulty to speak about a better concerning climate change. The 2°c objective is still not achievable according to the current agreements. She announced some major topics for the EU:
– Decisions around the recently announced Jucker’s investment plan
– Climate economy
– European Energy Union
– the fight against Donald Tusk to make energy transition an European topic

The first discussion round was launched with the following question: How can we learn from Copenhagen and avoid the failures of the conference?

Carole Dieschbourg highlighted the profound division of the EU during the conference and the fact that it showed the withdrawl of the EU on the international scene. Yannick Jardot brought up the problem of climate scepticism during COP15. Mrs Valerie-Masson responded by underlining the exhaustivity of the last IPPC reports, which are very transparent and mention controversial topics. She insisted on the problematic politization of science and education.
Mr Humberto Delguado Rosa pointed out that climate sceptics are having hard times in Europe because of the burden of proof concerning anthropologic responsibility for climate change. He insisted on the exemplar role of the EU: we are the countries that made huge progress in GHG-reduction. By delocalizing polluting industries and go back to coal when nuclear is rejected by the population ? He also made a list of expectations for the COP20 in Lima: requirements for INDCs (Cf. Warming up in Lima), increase of ambition, as many elements for the draft text as possible.

The next speaker Wendel Trio exposed the civil society strategy: expectations (we need to increase the level of mobilization and not expect from world leaders to be ambitious); preparation (after the publication of INDCs in March, look at the emission gap, write an assessment and put pressure for correction before Paris); cooperation (increase the level of trust between developed and developing countries by highlighting finance issue).

Thomas Becker, who used to be a member of the Danish climate delegation, insisted as well on the necessity to get the trust from China + G77 and not focus on the US, since if the EU finds an agreement with the emerging economies, the US won’t be able to block it. He made some other very interesting points:
– increase French economic diplomacy that an energy transition is possible and economically viable
– avoid alternative paths to the UNFCCC process by taking into account that some delegations are restricted to 2 or 3 delegates, which do not have the capability to follow these alternative paths

Last but not least, Ronan Dantec took the floor and made a very pragmatic commentary: we need to connect climate negotiations with a whole vision of the world, that is to say with development needs (cf. Sustainable Development Goals) and the growing world polarisation between the US-EU-usual petrostates allies axis and the uprising block of emerging countries. 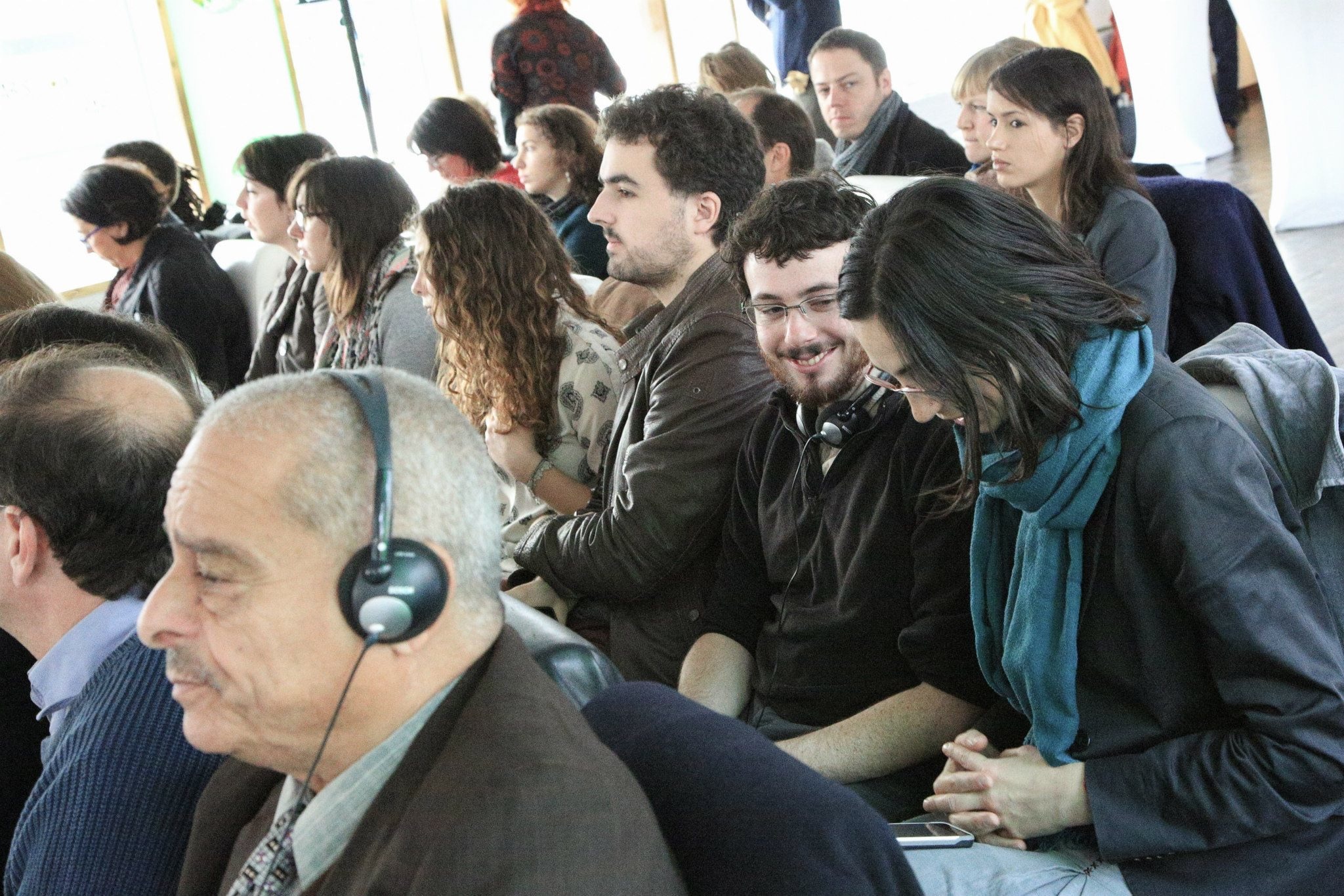 I think he and Mrs Masson-Delmotte (who insisted on sustainable development education) saved the panel and gave me a little bit of hope that climate change is not only about climate experts. After this first round, I realized just how much Andrew Dobson is right when he talks about the “mainstreaming of ecologism”.

First, the use of the wording “climate economy” from Rebecca Harms. Is it a way to avoid the controversial wording “green economy” ? Is it a fear to use the wording de-growth or post-growth? Do you really believe in the possibility of decoupling energy consumption and growth?

Second, the belief in the intrinsic value of the nature, replaced by an anthropic conception of climate justice based on inter- and intra-generationnal equity. Yes future generations were mentioned, but no word on the biodiversity loss during the talks. As if the humanity was the only one affected by climate change and a superior entity in its ecosystem.

Finally, the delocalization issue. Apart from Ronan Dantec, nobody mentioned resilience at the local level. Someone from the public even had to ask the Commission if they considered cities as partners towards a sustainable society. Nevertheless, local level is the level of change. As Ronan Dantec mentioned, countries can decide ambitious objectives. They are going to be respected if citizens change their everyday way of living.

The round of question raised many issues such as :
– gender equity and climate change
– the EU Climate policy, not ambitious enough according to civil society (Friends of the Earth, CAN). Carbon market mechanism can not be the only instrument to reach the objectives, energy efficiency targets have to be legally binding as well and the Commission should support suppression of fossil fuel subsidies
– use the Green Climate Fund as an instrument towards sustainable development, not only climate change adaptation and mitigation

After an impassioned debate between Wendel Trio (CAN) and the DG Climate representative, Yannick Jardot asked the panel their initiatives until COP21.

A strong collaboration between the COP21 Presidency (France), Luxembourg and the European Commission has been repeated. The IPCC has planned to contribute to the public debate by organizing a big scientific conference on climate change before the COP, by collaborating with UNESCO during the conference “Climate Change: Our Common Future”, and by organizing the meeting between researchers and civil society thanks to the climate train traveling in France. The CGLU continues its work by producing a common declaration (Cf. Compact of Mayors in New York) and lobbying to get directly access to finance in the texts. CAN makes public mobilization as a priority with the aim to link SDGs with the Paris agreement.

Laurent Fabius, who had just arrived from the French Parliament to discuss the recognition of the Palestinian State, took the word over. He mentioned the change in atmosphere from the decision to host COP21 in Warsaw to the situation today (the agreement between US and China, strong mobilization during the Climate Summit, “progress” in financing the GCF), even though there is still loads of work to achieve until COP21. The first step is COP20 in Lima, where the parties need to speed up the work on a draft text. Then “March is coming”, when the INDCs need to be pledged. During the second term of 2015 the G7 will take place in Lübeck. In September 2015 the Head of State and Government Summit on SDGs in NY will hopefully be a strong momentum showing the path to COP21 … He underlined the strong support of the French presidency to civil society mobilization, reminding us we need to play a role in driving the parties to raise their ambitious.

On the way back, I realized how far we were from saving the planet. Yes, the chance to get to an agreement in Paris are growing. However, solange climate negotiations require such a high-level of expertise to be understandable and are taken apart from the rest of the environmental and ethical issues, we might get to an agreement but we won’t impulse the radical and urgent change needed. As a reminder for our climate negotiation experts, here is a little diagram highlighting the nine boundaries of the planet. Certainly climate change impacts all of them, but it is only one of them … 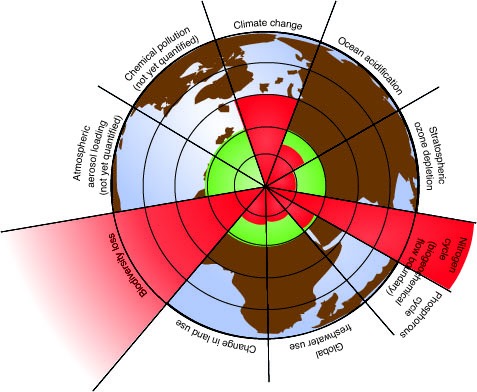 Written by Cecile Marchand. Cecile is an experienced climate activist who spends her time building a better world between Germany and France.