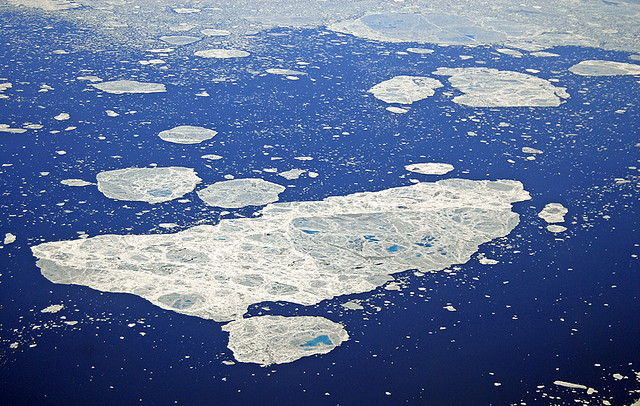 The trends of climate change present the worldwide security challenge and require an adequate response of the international community. The negative impacts of these changes are demonstrated regionally in a different extent; largely, we can observe them in the Arctic region. Numerous security questions in environmental, political, social, and economic areas are raising and it is inevitable to deal with them properly and promptly. In this two-part essay, I will provide brief cross-sectional look, with regard to these areas, on the impacts of the climate change on the region.

The Arctic is a northern-polar region consisting of the Arctic Ocean, adjacent seas and islands. It is largely covered with the ice throughout the year where average temperatures range below the zero. The global warming and the consequent rapid shrinkage of the ice-cap followed by the methane release threaten the life and the future of the people and fauna in the region. The environmental threats with regard to the climate change substantially impact the whole northern hemisphere and accelerate environmental planetary changes.

Nevertheless, this disconcerting situation may bring for some the attractive opportunities in the economic terms. The melting sea-ice is opening the new transport roads and the explorations are proving the presence of worth amounts of natural resources. Therefore, the interest of the surrounding countries brings the region in the focus of international politics as their territorial claims are rising.

As the Arctic we can consider the area situated above the Arctic Circle, which consists of the landless North Pole surrounded by the Arctic Ocean and parts of Canada, Greenland/Denmark, Russia, Island, Norway, Sweden, Finland and Alaska/USA. Its geographical position causes the half-year cycles of continuous day or night.

Despite harsh conditions, more than 13 million1 people reside at the Arctic region. It is inhabited mainly by indigenous people that belong to the 5 major groups; the most numerous Inuit, then Kalaallit Inuit, Alaska natives, Inupiak-Eskimo, and Russian-Siberian natives2. It is difficult to define proper statistics on disposable income or GDP per capita as the small populations are relatively dependent on resource extraction activities, transfer payments and the “non-cash subsistence activities”.3 The rapid cryospheric changes caused by climate change challenge the generally good adaptation of the inhabitants and expose them to vulnerability. According to the researchers4the main challenges include maintaining traditional land use and sea use; hunting, harvesting, and herding activities, infrastructure; search and rescue, pollution; human health; indigenous and local rights and involvement.

Besides the people living on the firm land, “the Arctic life” includes Arctic marine organisms and a variety of fish, birds, mammals and certain flora. Just Arctic marine organisms represent an important ring of the food chain, not just in the ocean but as well in the food availability for organisms living above the surface. Climate changes influence the temperature, salinity and acidification of the ocean and they have consequently negative impact on biodiversity. Specifically, there is a trend of decreasing occurrence of algal blooms and benthic5 presence that is an indispensable food source for both fish and humans. Within the food chain, this low benthic productivity, leads to the extent northward migration of the species, changed feeding patterns of birds and mammals, changes in the species distribution, further it influences food availability, growth rates and population dynamics.6

Several studies say that by current warming trends the Arctic will be entirely ice-free during the summer period by 2030-40. Some other, negative, impacts of climate change in the region are presented by methane release and decrease of reflection planetary ability albedo7 which causes further warming, disruption of the ocean and seas torrents, sea-level rise, changes in typical regional weather conditions, contamination and pollution of the Arctic area.

To continue in economic and political features, go to the second part of the article.

2Hotez, P. 2010. Neglected Infections of Poverty among the Indigenous people of the Arctic.