People displaced by climate change is already a humanitarian crisis, and there is little reason to doubt that it will far surpass current violent conflicts in terms of numbers of people displaced.

Climate change is occurring today, making certain places dangerous or impossible to inhabit. Since 2008, an average of 24 million people have been displaced each year by catastrophic weather disasters – storms and floods made more frequent by climate change. Some research suggests that the war in Syria was exacerbated by droughts from climate change. A recent study estimated that if global temperatures continue their upward march, applications for asylum to the European Union could increase by 28% by 2100.

Yet there is no definition of climate refugees in international law. The International Organization for Migration (IOM) tried to address this in 2008 by releasing its working definition of “environmental migrants” but the definition has not been adopted in other legal systems.

“Environmental migrants are persons or groups of persons who, predominantly for reasons of sudden or progressive change in the environment that adversely affects their lives or living conditions, are obliged to leave their habitual homes, or choose to do so, either temporarily or permanently, and who move either within their country or abroad.” – IOM working definition

The draft of the Global Compact for Migration to be adopted by the UN General Assembly in December 2018, calls on U.N. members to “better map, understand, predict and address migration movements, including those resulting from sudden – and slow – onset natural disasters, environmental degradation, the adverse effects of climate change” and “cooperate to identify, develop and strengthen solutions, including planned relocation and visa options” for climate migrants. In other words, this is a directive to develop a directive, with no clear definitions in sight.

It’s easy to sympathise with the policymakers that face the task of legally defining climate refugees, as the panoptic nature of climate change will make it complicated to clearly identify a climate refugee. Depending on the degree of the rise in temperature, everything will be impacted by climate change, but for some impacts, it is still scientifically difficult to prove that climate change was the only or the most significant cause.

This is why the Intergovernmental Panel on Climate Change (IPCC) uses scientifically cautious language to link climate change to its projected and current impacts; for example, they express ‘medium confidence’ to describe their certainty of high risk from extreme weather events under a 1°C rise in global average temperatures above pre-industrial levels. Only recently, have their been promising advances in the development of scientific tools that can attribute precise weather events, such as a specific hurricane that destroys a home, to climate change, so it is still difficult for a prospective migrant to provide proof that he would still have a home if it wasn’t for the increase in global average temperatures.

Indeed, when New Zealand announced plans to create a special refugee visa for Pacific Island residents who are forced to migrate because of rising sea levels, some analysts criticized that the government could face pressure to accept people fleeing disasters that are only indirectly climate-related, such as tsunamis or earthquakes.

Climate change threatens the systems that support human populations, not only regionally, but globally.

While victims of sea level rise and extreme weather face ambiguity when earning status as climate refugees, these are only the most immediate ways in which certain places will be made uninhabitable because of climate change. Droughts and melting glaciers are likely to change and limit access to water, thus impacting agriculture. In a world of globalised food systems, no economy will be left untouched from such changes in available resources. Climate change is likely to produce far more ‘economic migrants’ than climate refugees, those forced to migrate because of the incapacity of a capitalist system to provide for all when nature proves itself outside of human control.

As is true for most migrants, climate refugees would prefer not to be forcibly displaced from their land. Prevention of climate change is more urgent and effective than legislative accommodation of climate refugees. This is why the people of the Pacific islands have become some of the most vocal climate activists in the world. Those focused on humanitarian issues must recognise that climate change is not an environmental cause – it is a humanitarian cause, and the gravest one humanity has ever faced. Under current country pledges to reduce carbon emissions as outlined in the Paris Agreement, global average temperatures could rise by 3°C: a scenario in which we would all become climate migrants, and there is no other planet to flee too. 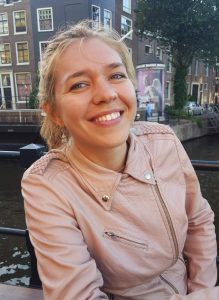 Anya Frances VerKamp creates media to encourage public support for a just transition to an ecological society. You can find her on twitter at @avercampo.