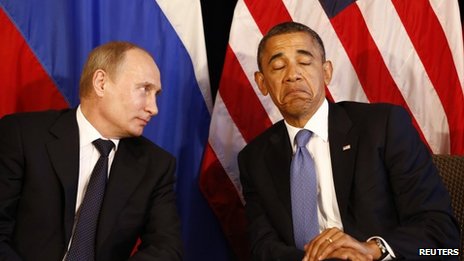 This article is based upon the ongoing Russia-US diplomatic tussle started after 2008 Russian intervention in Georgia to the current Russia annexation of Crimea.  According to foreign experts, following events from 2008 to 2014, this has given rise to a new Cold War between the US and Russia. Till now the US has double round sanctions against Russia but experts and media say it is not working effectively.  This article describes that,  even with such political dissimilarities between the US and Russia, their business corporate houses are dealing internally with each other following the notion, “Business should continue” despite of political tussle. If happens in an existing way (Russia-China gas deal and largest nuclear stockpiles of Russia)- How is this cold war going to be extraordinary than the previous one ?

Mr. Putin, whose recent annexation project dragged Crimea into the Russian map, is restlessly moving towards the southeastern part of Ukraine, where his pro-Russian Soviet style trained “comrades” are skirmishing with Kiev’s military men (aligned with the EU & NATO influence sphere). The US led sanctions against Russia has intensified diplomatic tussle (with the exception of the US-Russia space project) between the US and Russia created uncertain future across Europe.

EU’s economic magnetic incursion is rapidly moving alongside Russian satellite states, along with NATO submerging former Russian states into European Union membership that has been deliberating smacking the former frustrated world empire. Mr. Putin does not want to make it happen anymore; even he would have to take a sip of vodka with any EU or the US leaders as part of European solidarity. The EU brokered Kiev demonstrations at Maiden Square which ousted Mr. Yanukovych (Kremlin installed Ukrainian President) to Moscow, brought influence of Washington and Brussels around Kiev. Looking at this serious involvement, Mr. Putin and his anarchic separatist (according to the western term) are waving flags around the Donetsk and Luhansk after the Simferopol invasion.

Mr. Putin’s revival of Soviet Union type of thrill into global politics started with the Kremlin intervention in 2008 in South Ossetia and Abkhazia, the indirect engagement with Iranian nuclear proliferation program (aligned with the Iranian Supreme leader Ayatollah Khomenei) and the diplomatic solution for Syrian chemical weapons in 2013. Mr. Obama has been criticized heavily inside and outside the US for his inaction against Russian imperialistic moves. US foreign policy is critically punctured during Obama’s administration where he is failing to keep up the uni-polar nature of global politics engineered by his predecessor Ronald Reagan. Recent substantial position of Mr. Putin in the global order has forced Mr. Obama to resume towards Asia for effective cooperation with his Asian partners (unfortunately without Sino-Indian cooperation). After Mr. Obama’s statement during his Asian tour in Japan, US backing to Japan controlled Senkaku islands in the East China Sea made Beijing frustrated, who has been watching US diplomacy ‘grooming’ up in Tokyo.

Western powers gathered in the Hague for Nuclear Security Summit on March 24-25, 2014, while Russia was expelled from the G-8 club – this powerful club of the world’s advanced economies where the Ukrainian crisis has toppled everything. This has led the nuclear politics and even the future of Eurasian and Europe into a deep sea of fears. Mrs. Merkel appeared somehow balanced regarding Russia annexation of Crimea (as she may be suffering from NSA data mining syndrome of her cell phone) during the Rose Garden Press Conference at White House, and her internal policy allowing Austrian Energy Company (OMV) pipeline deal with the Gazprom.

Initially, the ruble was smashed badly but reports suggest that it is now improving. However, the IMF declared that Russia was already in recession. Though, sanctions may have limited influence. Under these second round sanctions against Russia, the US is especially focusing on banning Russian investors & companies based in the USA. On the contrary, Exxon Mobile and BP are still continuing business with Rosneft, the state oil company of Russia led by Igor Sechin, making it difficult for the White House to stand against business.

The military, economic and geo-strategic location of Russia is still favorable for the Kremlin ruler to counter Washington, an old rivalry that had broken out the Cold War after Second World War for more than 3 decades in history.

Mr. Obama, despite his “ambitious” Asian tour could not successfully lead the degrading Japan-China relationship. He may have undergone a bizarre moment due to China’s strong confrontation over disputed the islands of China and Japan, anti-US sentiments growing in Venezuela, Mr. Putin’s betrayal after the G-8 in Belfast (he can’t be trusted anymore) retreat, mismanaged Israel-Palestine Peace talks and Syrian sectarian divisions. The recent Sunni led invasion in Iraq over the Shia Iraqi government forced again Mr. Obama to get out his US troops from barracks to fight against growing insurgents in Iraq (which was withdrawn from Iraq in December 2011). Overall, the Obama administration is hardly succeeding in managing war on Middle East.

Mr. Obama is pulled in to the critical era of the US foreign policy crisis in modern day history after the collapse of the Soviet Union. Under this critical situation any inaction against Russia means failure of the US “exceptionalism” and any hard action means pushing off the ongoing Syrian Peace talks (managing sectarian division in Middle East) and Iranian nuclear talks. According to some reports, the Chinese economy is on a way to bypass the US economy under this ongoing scenario of Cold War season 2. Isolation with China in any form means (restive Cold war season 2, where the Kremlin may patch-up with Beijing especially from an economic standpoint). Recent Russia-China gas deal and Russia being the holder of largest nuclear weapons stockpiles on earth, may lead to a new season of Cold War 2, which would be pretty bitter for an infant EU and the US if the  Russia-China coalition fruitfully comes to the future.

(Writer is the Founder/Director of Garjan.Org)