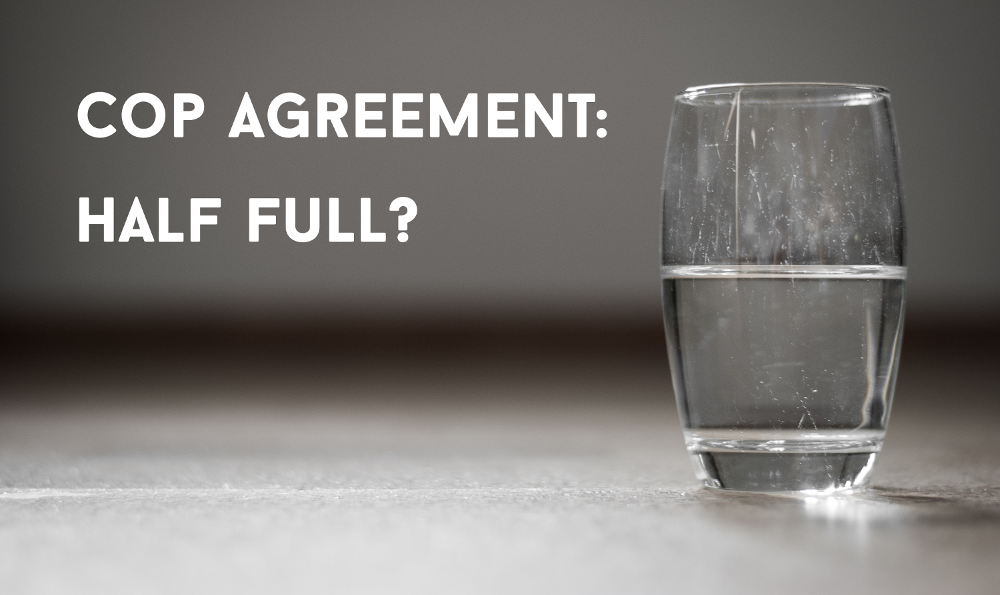 During the week, a lot of low-scale things happened. This was a problem as especially smaller delegations, particularly from the Global South, faced challenges to track everything. Negotiators representing EU member states also said that the coordination was very hard. For civil society, most of the meetings were closed. This was due to requests of certain countries to keep some negotiations closed, namely what has been discussed in “informal informal spin-offs” and other informal formats. The French organizers also said there is a lack of capacities with meeting rooms being too small.

Another important thing: The working group, pre-negotiating the new agreement, handed their results over to the COP. The working group is called ADP, the Ad Hoc Working Group on the Durban Platform for Enhanced Action. Their mandate was “to develop a protocol, another legal instrument or an agreed outcome with legal force under the Convention applicable to all Parties”. This task has been finished now. The big questions cannot be negotiated without the political heavyweight of ministers. These negotiations will then, as said above, take place under the COP (Conference of the Parties), the highest decision making body of the convention.

So where are we now?

The week started with a 54-page text that has now been reduced to 43 pages. The number of square brackets has also been reduced. A square bracket indicates an outstanding decision or existing alternatives. The first text had about 1600 brackets – now there are around 970, that is still quite a lot to negotiate for the minister in charge. Yesterday evening there were two text proposals existing. One was a compilation of the discussions, the other one included bridging proposals between the different ideas. The text with bridging proposals has now been forwarded to the COP.

What is in the draft?

Basically everything, but we have seen some changes from before.

Also the option of staying “below 1,5°C” as a worldwide temperature goal is still existing. The outcome document of COP15 in Copenhagen already contained the number, but negotiators decided just to take note of it. The legal agreement on this specification has been reached one year later in Cancun. Afterwards, 2°C was the aimed temperature goal. It is still often referred to as consensus, but it is more like a smallest common denominator. 1,5°C would be a stronger, more ambitious limit. But there are a lot of brackets around this option. Therefore it is quite possible that this option will not survive until the end of COP21. There is a higher possibility that the 2°C limit will be kept and 1,5°C will be included somewhere in the text.

Another major issue is the question about “Loss and Damage“. Here we should point out that the option to not mention it in the new agreement is not anymore existing. Two possibilities fold out at the moment: First to have “Loss and Damage” as its own part, or to the see it as part of adaptation. The first option would be more ambitious in the end, as it would also take the historic responsibility of the Global North as well as the already existing impacts of the climate crisis into account.

On the long-term goal still a lot of options are in the text. In the specific paragraphs a lot of brackets can be found, so negotiations might unfold as even more complex. Furthermore, the option of 100% renewable energy is out of the text.

Two other topics have seen nearly no changes. Still, they are slowing the process down. Both can be seen as some of the most controversial issues.

One of these topics is finance. Who is going to pay what? Will the $ 100 billion for the Green Climate Fund from 2020 onwards be mobilized annually? This is an issue that has to be resolved in Paris. The second big topic is the question of differentiation between countries. The firewall between Global North and Global South (also known as North-South divide) is getting thinner, but what will be discussed at the ministerial level is not predictable.

All in all: It becomes more and more apparent that this agreement will be neither a just nor an ambitious agreement. The ambition is already lower than before Copenhagen. The process is also moving too slow and too intransparent. Rights are being negotiated, which should not be subject to negotiations, and countries are sabotaging the text. But we cannot say what will happen. As the French presidency said: “Nothing is agreed, until everything is agreed.”

There are clear red lines. These lines must not be crossed. And there is a need to work on that, because #ItsOurFuckingFuture!