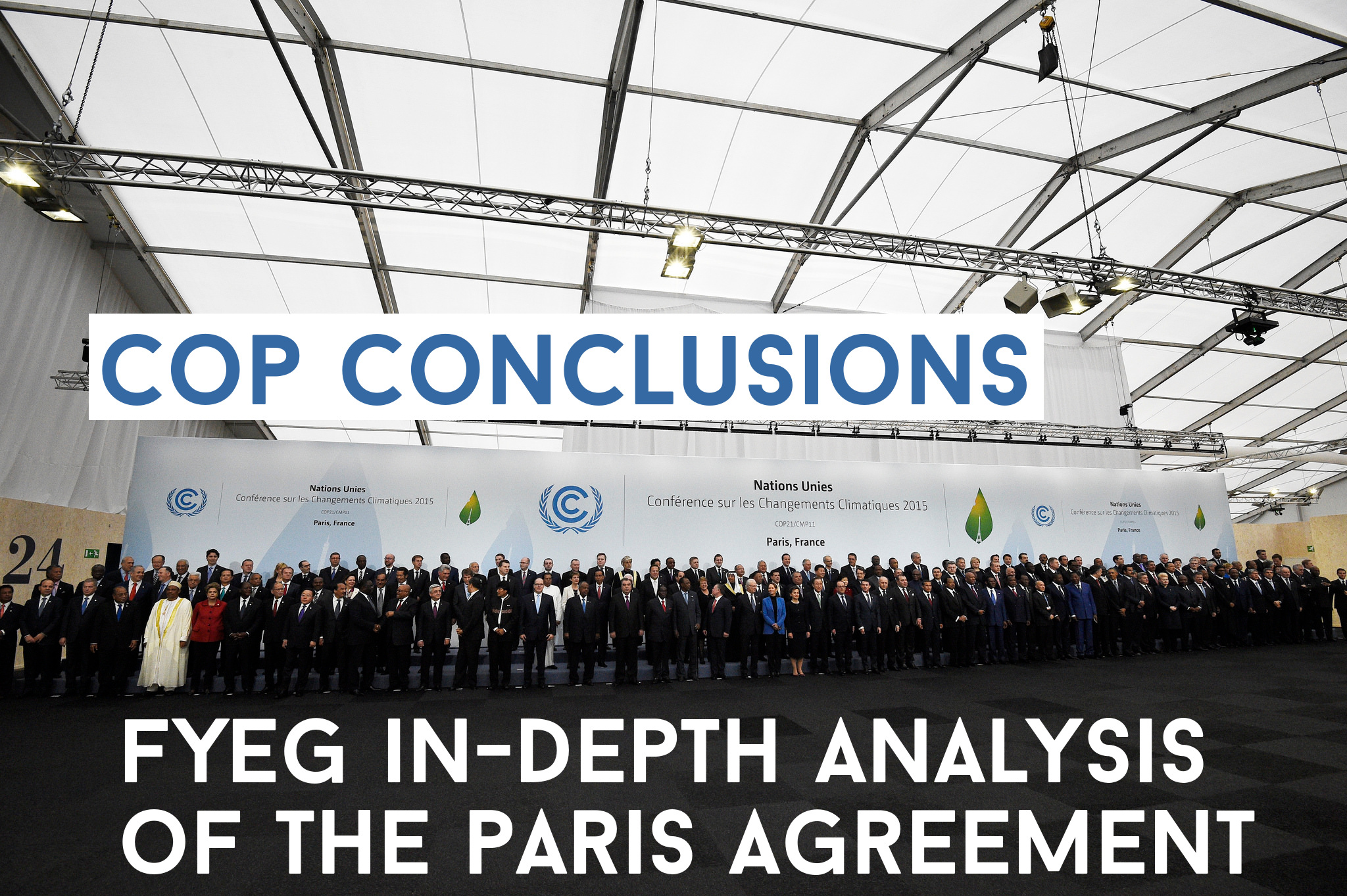 On the 12th of December 2015 evening a story, ongoing for 21 years, ended. This was the evening when nearly 196 countries agreed to have the first legal treaty, applicable to all, that tries to combat climate change. Unlike it’s predecessor, the Kyoto Protocol which only asked developed countries for emissions reductions, this agreement expects emissions reductions from all countries.  It is less ambitious that what should have been decided in Copenhagen, is it even less ambitious that the United Nations Framework Convention on Climate Change from 1992 – despite that it tries to consider human rights and losses and damages. Simply, it is still the smallest common denominator between about 190 countries.

The aim of the agreement is to limit global warming “to well below 2 °C above pre-industrial levels and to pursue efforts to limit the temperature increase to 1.5 °C above pre-industrial levels” (Article 2 of the Agreement). At least one demand of civil society – the 1.5°C Goal, became at least partially true and generally the Agreement is more ambitious than it was expected by civil society organizations. Also, the COP21 put an end to a 23 year long process which is seen as success by a lot of the involved individuals. Moreover, the positive messaging that surrounds the treaty has the chance to start something which goes beyond what the Paris Agreement considers formally: climate justice, ambition, and a world breaking free from fossil fuels.

In the end the Agreement manifests global injustice. If the 1.5°C- Goal would be more than just a good saying, then countries would take action until 2020, which at this point global emissions would need to peak, and until 2050, which at this point there should not be any more CO2 from fossil fuels emitted. There would be a fair burden sharing between the Global North and Global South and the Global North would make adequate resources available. This would be done for all pillars of the climate negotiations, mitigation, adaptation and loss and damage, which today the Global North has failed to make adequate resources available for. According to the CSO Equity Review, India and China are doing their fair share in regards to climate policy, while the US and the EU are massively lacking behind. The Global North transfers its burden (and therefore its responsibility) to the Global South and at the same time, the Global North has fewer legal obligations, the Global South more.

Now a detailed overview of the agreement:

The Paris Agreement itself is a legally binding treaty. A decision of the COP is only “soft” law, while the Agreement itself is “hard” law. But, according to the decisions made in Durban in 2011, the agreement needed to be “applicable to all” and therefore some tricks have been used. One of the main reasons being that the Senate in the US would not ratificate any agreement. Still, we now have a legally binding agreement – something that is called an “Executive-Agreement “ in the US which can be ratified by the President. Regarding the Nationally Determined Contributions (NDCs) – one core aspect of the new agreement – only their existence is legally binding and countries only have to “intend” to achieve these NDCs. The scope of these NDCs is laid out in the decision.

The Agreement also doesn’t have a mechanism for non-compliance, but only a committee which can promote compliance and facilitate non-punitive measures, as laid out in Article 15. However, most international treaties do not have strong compliance mechanisms.

Article 21, paragraph 21, defines the enter-into-force requirements of the new agreement. To enter into force it needs to be ratified by 55 countries representing 55% of the global greenhouse gas emissions. This doubles threshold is not so high that one country could block the ratification.

The firewall between Global North and Global South was one of the most critical points of the Agreement. According to the principle of common but differentiated responsibility it created two groups of countries. China was one of the strongest supporters of differentiation and this was  strongly opposed by the US. The solution is that the Global North should take the lead, but without legal obligations and other countries are encouraged to contribute something. Furthermore, we have only a very weak transparency framework. A lot of things will be decided during the implementation of the agreement.

From the outside, this seems to be one the most central points of the agreement: Article 1, paragraph 1 of the Agreement says, the purpose of the agreement is to stay “well below 2 °C above pre-industrial levels and to pursue efforts to limit the temperature increase to 1.5 °C above pre-industrial levels”. How serious this will be, depends in the end on the resources made available by the Global North.

During the negotiations there was a lot of hope from civil society groups to have at least the word “decarbonisation” in the final outcome. Article 4, paragraph 1 now only speak of a “balance between anthropogenic emissions by sources and removals by sinks of greenhouse gases in the second half of this century”. This essentially means Net-Zero emissions which not only leaves the door open to false technical solutions like Carbon Capture and Storage but also to a situation where food production and sinks could be competing against each other. Another point is that the peak of CO2- emissions should be reached as soon as possible. The Paris Agreement would have needed to be more ambitious in this, if the 1.5°C threshold shall really be reached. How serious this goal is meant depends on the resources that are made available. Therefore the aim needs to be judged in relation to the resources provided from the Global North as well as on the political demands that are rooted in the temperature and the long-term goal.

Climate finance, the financial support provided from developed countries to less developed, is another core of the Agreement. Generally speaking the language used here is very weak and the most important points were moved to the decision. The decision states that $100 billion USD should be “the floor” for further contributions. From 2020-2025 finance shall be provided from the Global North in this amount. However, this amount is just intended. From 2025-2030 other countries shall provide finance as well, and for this period there shall be a new finance target which is more than the current $100 billion USD. This is written down in Paragraph 54 of the decision. Also there shall be “new sources” of finance. All in all, this is much too less given the scale of the problem.

This was one of the most emotionalized topics during the conference. Now Loss and Damage has its own Article, the Article 8. Furthermore the already existing Warsaw International Mechanism for Loss and Damage has been anchored in the Agreement and the definition is relatively wide. Despite this, there is one very controversial sentence  in the decision, brought in by the US: Paragraph 52 says, that Loss and Damage “does not involve or provide a basis for any liability or compensation” – one key demand on this topic. This is not acceptable, even if having loss and damage as its own Article is a success.

The new Agreement contains market mechanisms. For example, Article 5 is based on the REDD+ – mechanism. Article 6 is about a mechanism for sustainable development which shall be developed. It will contain the possibility to offset emissions (Article 6, paragraph 4c), but it also doesn’t allow double counting of emission reductions (Article 6, paragraph 5). All in all, this strong focus on markets is negative.

This is one small light in the whole dark night of the agreement. NGOs demanded that human rights should be part of the purpose of the new agreement – but now they are in the non-binding preamble of the agreement. Countries “should […] respect, promote and consider their respective obligations on human rights”. For the first time intergenerational equity is mentioned in an international agreement. All in all, this is very clear – and compared to other environmental treaties – quite progressive.

This major source of greenhouse gases is not considered at all. It is well known that 1.5°C cannot be reached by excluding them.

From the beginning on, it was clear that Paris will not be enough. Due to this, civil society prepared already before that there was a need to go beyond Paris. This is right. At the same time, it is also right to demand climate justice and ambition inside the negotiation – if the decisions in the negotiations get worse, this cannot simply be ignored. Respective to what is possible inside the UNFCCC process, this agreement is ambitious. While at the same time, respective to what is needed in reality, this agreement is unacceptable. 2016 is the year in which the world needs to start to break free from fossil fuel. Let’s be part of this – in the negotiations – and after all even more important – and fight against local struggles and be present on the streets.