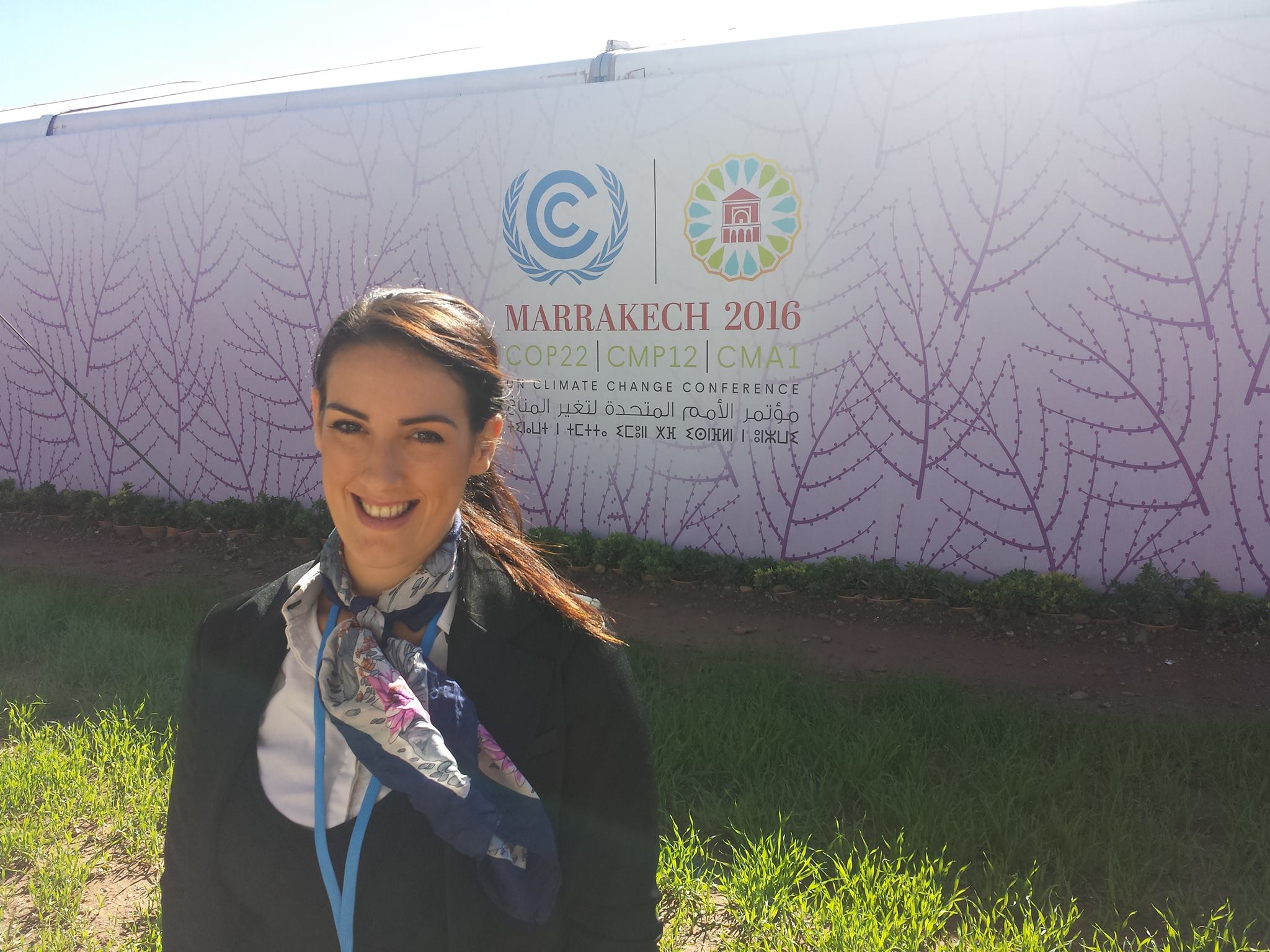 I’m new to COP, here’s a brief update on what it has been like so far.

My name is Danika Formosa and I am the International Secretary of the Maltese Young Greens. I am part of the Federation of Young European Greens delegation attending the first session of the Conference of the Parties serving as the Meeting of the Parties to the Paris Agreement (CMA1) as well as the Conference of Parties “COP22” under the United Nations Framework Convention on Climate Change (UNFCCC). The event is taking place between the 7th and 18th of November, 2016 in in Marrakesh, Morocco.

The Paris Agreement is a new legally-binding framework which is aimed at coordinating international efforts to tackle the issue of climate change. The Agreement establishes a global warming goal to remain well-below 2oC on pre-industrial averages. Therefore countries are to formulate progressive approaches and mitigation techniques to lower their carbon dioxide (CO2) contributions and move towards more sustainability. The Paris Agreement has been adopted as part of a decision of the Conference of Parties to the United Nations Framwork Convention on Climate Change (UNFCCC).]

The Conference has been very hectic as there are many activities happening and discussions in different sectors. Each day has been dedicated to a specific theme. I am trying to follow discussions directed towards climate action and loss and damage, however it is proving to be very difficult for me since I am interested in other topics such as agriculture, transport and maritime affairs. So I have devised a new strategy to make the most of my time here, which is to attend a variety of meetings and discussions which would help me understand the different spheres, how they operate as well as the connections between one another. 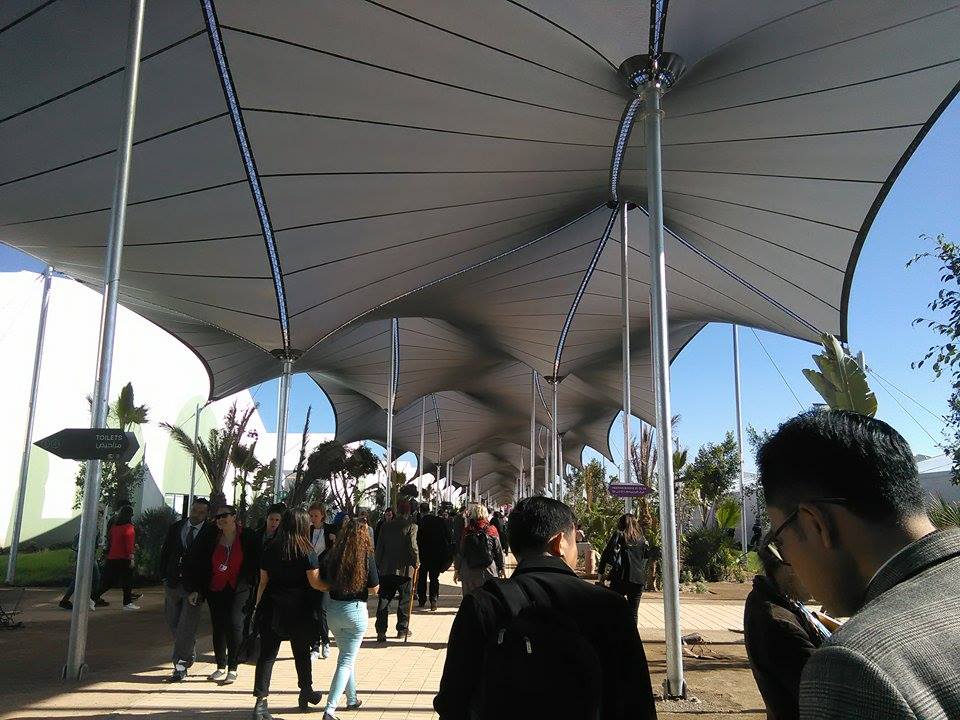 The theme of first day of the conference was “Africa in Action”. Salaheddine Mezouar, President of COP22 and Foreign Minister of Morocco stated that “This conference is being held on African soil, it therefore demonstrates a whole continent’s commitment to contributing to the global effort to fight climate change”, during his keynote speech at the Opening Ceremony of the event yesterday.

‘’All together we have made possible what people have said was going to be impossible” stated Ms. Ségolène Royal, President of COP21. “It is with determination and passion and we have never given up. This is a historic moment in the histroy of humanity.” Ms. Royal called on other parties to also ratify the agreement during her opening speech on Monday.

So the opening plenary is where I spent my morning and there were many interesting plenary discussions throughout the day, as well as side events ongoing side events. I attended a side-event organised by YOUNGO on youth expectations of COP22 and another side event on improving the measuring, reporting and verification (MRV) for agricultural emission reductions in the livestock sector. I found this session extremely interesting as there were representatives from Global South countries who face different challenges; so in this regard, it has helped me get more insight to the problems which are faced, especially by countries who’s carbon emissions are resultant from the agriculture industry.

The theme for the second day of the conference, Tuesday 8th November, was “Earth Info Day”. This theme gave the opportunity to enhance engagement opportunities and link science to different changes, in order to better implement the Paris Agreement. During the morning sessions, discussions which took place in the plenary hall were focused on giving an accurate account of the state of the climate, establishing key indicators of climate change and different techniques and strategies which are used for the collection of data to measure the indicators. During the second part of the plenary session in the afternoon, discussions were mainly focused on linking Earth observations with the global response to climate change, discussing possible support adaptations and other mitigation techniques.

The side event I attended in the evening was split up in two sessions; the first one focussed on the operational capacity to monitor anthropogenic carbon dioxide emissions; while the second part focused on emissions from the aviation and sea transport industry. During the first part of the session, the EU policy regarding implementation was addressed, and matters such as how other ountries could also adapt to the changes were tackled. The second part of the session introduced a new strategy by ICAO, whereby new regulations for aircraft will be implemented in the member states. Sustainable fuels were also discussed briefly as well as other measures pertaining to the new regulations. Mr. Edmund Hughes from the IMO also gave insight to the challenges being faced by the maritime industry and how ships are contributing to the carbon emissions. An overviews of the SDG9, Sustainable Industrialisation and International Transport closed off this session. Provided that the aviation and maritime industry contributes to high percentages of emissions, I found this side-event very interesting. 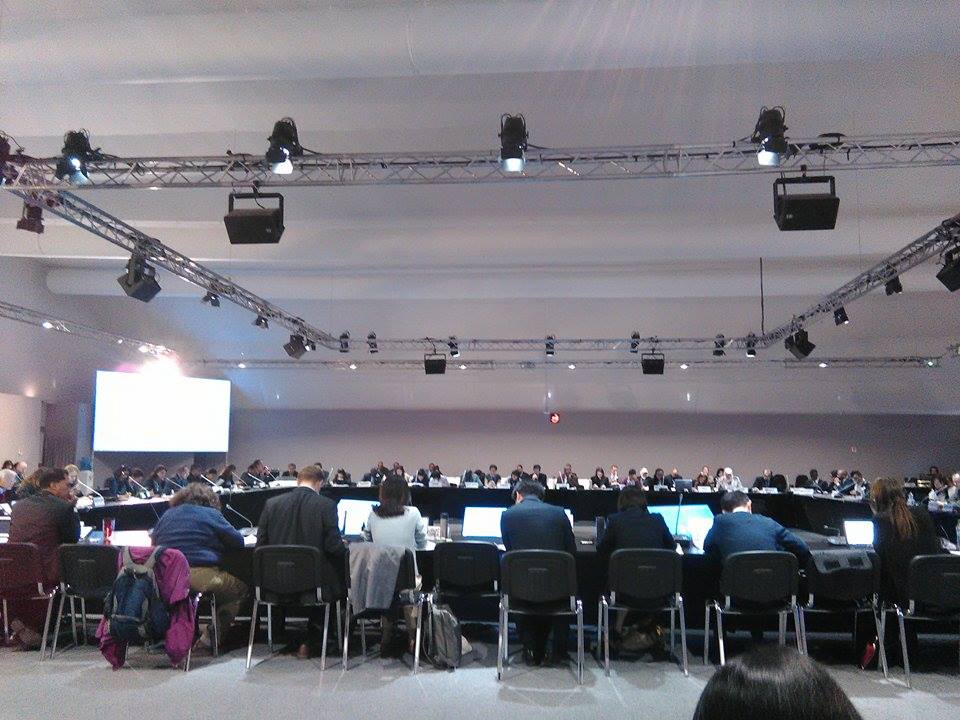 Today is Wednesday and I’m not half done- I have another two days here and there is so much more to learn and engage in! I attended negotiation sessions earlier today and two draft documents were amended and approved. I enjoyed following the discussions even though it can be slightly overwhelming (and cold) in the meeting rooms. Yes, it’s quite cold here and sometimes I find it difficult to concentrate; but on a positive note, there are rooms with heaters so I can go warm up in between sessions. The venue is clean and well-organised. The restaurant, tables and chairs are all made from wood and the facade of one of the Pavillions is decorated with wooden pallets. There are also some structures or designs made out of recycled items around the venue. I am not sure how sustainable this whole event is, as unfortunately I have seen a lot of food waste, plastic bottles and plastic cans in the bins, not to mention all the ACs which seem to be switched on and unable to regulate (maybe) but I can see part of the effort.

So, going back to the techical side of the conference – despite that the Paris Agreement has proven to be ambitious, the overall goal of the agreement is to keep the global temperature within the stated degree. The Paris Agreement set the framwork which ratifying parties promise to abide by in order to control the carbon emissions and the state of the environment. The Agreement alone will not solve the problems we are facing and it is therefore the responsibility of Governments, stakeholders and the public to engage and take on responsibility for the decisions that we take.

I’ll be sending in another update at the end of the week, so that’s all I have for now. I hope you found my update interesting and I am happy to answer any questions you might have.

Danika Formosa is an Environmental Engineering student at MCAST. She also serves as international secretary for Alternattiva Demokratika Zgħazagħ, projects coordinator for Sharklab-Malta and secretary-general for the Institute of Applied Sciences Student Organisation, IASSO. She can be reached online on: formosa.danika@gmail.com] and at Twitter @Danika_92x