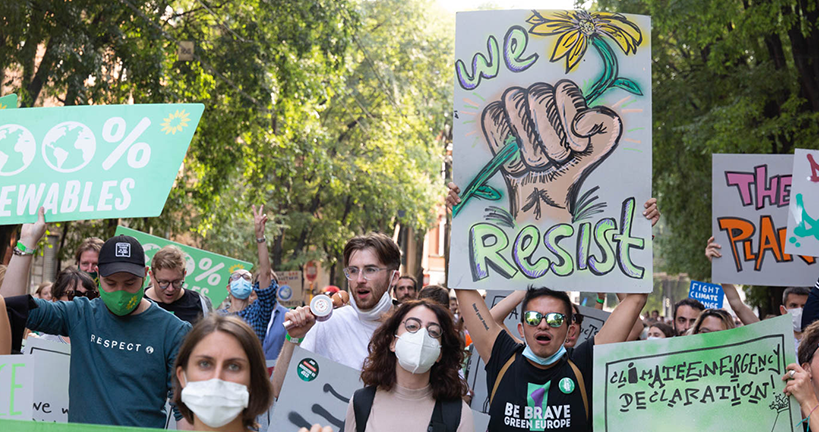 Naomi Klein recently claimed that COP27 is “greenwashing a police state.” I agree. So why am I going? Why, with the Young European Greens, am I organising a delegation of eight people to go there? What do we hope to achieve?

In 2011, Egypt was a burning flame of hope in the Arab Spring. The world watched on as a popular uprising rose up against brutal suppression to successfully end Hosni Mubarak’s ruthless 43-year reign. Now, the flame is close to being extinguished. Egypt is eight years into Abdel Fattah el-Sisi’s reign, after he was brought to power through a military coup d’état in 2013. His power is founded on a regime of fear, with an estimated 60,000 political prisoners subjected to widely-document torture. For many activists, even those who have escaped the iron grip of Sisi, COP27 will be out of reach. The Egyptian state has not only relegated sanctioned protests at the Conference to a golf course in the middle of the desert, but has blocked any real Egyptian activists from being able to attend the conference. Instead, government-sanctioned NGOs will represent Egyptian civil society at COP27.

This is exactly why FYEG needs to go to COP27. If grassroots activists do not go to COP, then we leave the stage open to the Egyptian regime and their astroturf NGOs. I recently met a former Egyptian political prisoner at an event in Brussels, and he told me that it was my responsibility to use my ‘European passport privilege’ at COP27. No activist is entirely safe in Egypt, but European activists are a great deal safer than Egyptian ones. The easy option would be to say we’re boycotting COP until Egypt releases their political prisoners, but this would be ineffectual beyond making us feel good about ourselves. The much more difficult but effective decision would be to go to Egypt and utilise the spotlight that Sisi is placing on himself to call out the Egyptian regime. So that’s what FYEG will do.

COP is also, of course, about climate change. Even without the question of it being in Egypt, some activists argue that COP is not a useful process for us to spend our energy on. I disagree. Yes, they generally end in failure. Yes, even the commitments contained within the most promising international climate declaration of all time, the Paris Agreement, have been overwhelmingly missed by the world’s governments. But there will be no globally-coordinated response to climate change (and therefore no hope of transformative success) without international climate negotiations. For that, we need COP. And the Paris Agreement has had a significant impact on global emissions and the perceived legitimacy of the climate movement. Just look at the ever-burgeoning number of climate litigation cases, which are partly resulting from the Paris Agreement’s text.

But the importance of COP goes beyond the negotiations. It is the one time every year that the world’s climate movements come together in one place. And it just so happens to also bring together the world’s media. This is an incredibly powerful space and we need to be there if we’re serious about fighting for climate justice.

FYEG’s value at COP may not be immediately obvious, as a European organisation focused on supporting national-level organisations. But the reality is that there are not many youth-led organisations that are skilled at (1) operating in international spaces, (2) understanding and influencing institutional politics, and (3) working with grassroots social movements. To be clear, we still need to be taking the lead from African civil society. But we have an important role to play. For example, FYEG co-organised the climate strike inside the COP26 venue, which platformed exclusively activists from the Most Affected People and Areas, attracted media attention from around the world, and got me a stern talking to by UN Security for organising a protest that was ‘too big’ according to the Conference rules. At the end of the Conference, we embarked on a battle for the honest narrative of COP26. By both formal means (like being interviewed on BBC News) and informal (running onto the stage with a banner and shouting down the microphone, as the media stood waiting), FYEG helped to shape COP26 into being seen as the failure it was.

This role is largely about focusing on European actors – at least for the negotiations themselves. At COP27, we have three demands. Firstly, we’re putting the focus on the goal of 1.5 degrees (that is, to keep global warming since the industrial revolution below 1.5 degrees celsius). As remarked in the European Parliament resolution on COP27, “there is now a nearly 50% risk of temporarily exceeding 1.5°C in the period 2022-2026.” It is essential that Governments don’t silently shelve this goal, or pretend it is going to plan. Secondly, we will be pushing for countries in Europe to start paying for loss and damage right now. This means Europe – as disproportionately responsible for emissions both in the present and the past – transferring money to those most affected by climate change. The refusal of wealthy countries to agree to this at COP26 was one of the conference’s great failures, with the delegates agreeing only to the “Glasgow Dialogue’ – a two-year-long conversation which simply delays support to those whose lives and cultures are being desecrated by wealthy countries’ emissions. Finally, we’ll be pushing the message that European countries, and the EU as a whole, have historical responsibility for climate change that means they need to be leading the transition. Right now, the European Commission is strong in its rhetoric, but lacking in action – or even ambitious plans. For example, it is estimated by Oxfam, among others, that the EU needs to cut 65% of emissions by 2030 to do its fair share to avoid 1.5 degrees of global warming, and yet its ‘Fit for 55’ Package only aims for 55% of carbon emissions to be cut by 2030, which will not be enough to keep global warming below 1.5 degrees.

At COP27, European world leaders and European climate activists both face the same choice: be bold or take the easy option. For leaders like the European Commission’s Frans Timmermans, being bold means following the sciences, instead of keeping to business as usual. For activists, it means choosing to push their leaders to do more, instead of uselessly boycotting the only annual conference that has any hope of progressing international climate politics. It also means taking a particular role at COP – one which platforms activists from the Global South who are there, and amplifying the voices of Egyptian activists who cannot be. Without falling for the illusions about this Coca-Cola-sponsored COP or the facade of democracy that the Egyptian regime is presenting, that’s what our delegation will try to do.