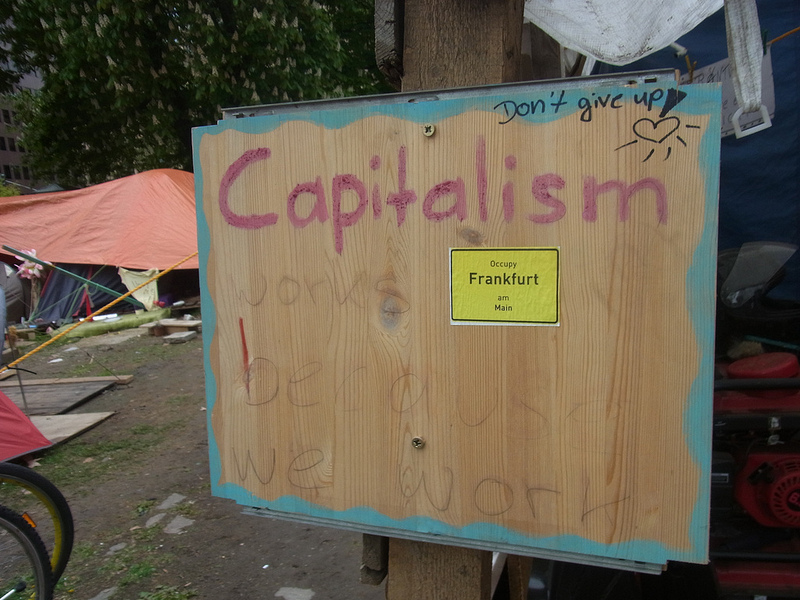 On the 10th of April the “Youth in Crisis”-conference took place in Brussels. One of the proposals worked out by the economic workshop is a “coupling” of wages, which is also called a “maximum wage ratio” by some. This seems to be a relatively new and not well-known concept1, which is why I have decided to describe, analyze and evaluate it more deeply in the context of this article.

What do we mean by “coupling” wages? There are at least two concepts, which can be seen as a “coupling”. Both have in common that there is a maximum wage a company can pay to high earners (e.g. CEOs, Managers). The amount which can be paid is defined either by the average wage of employees or by the minimum wage earned in the company (as recommended by Andrew Simms2 and others). Our workshop decided to demand the latter, because a coupling with the average wage could still mean dumping wages for some workers.

I will illustrate the concept with a fictional example. Let’s assume, custodian Marc has the lowest wage per hour in company XYZ. He only earns 10€/hour. Let’s also assume Sarah – the manager of XYZ – to earn 200€/hour. We can see that Sarah earns 20 times as much as Marc, which is what we would suggest as a maximum wage gap (This income Inequality seems to be big, but it is in fact very small compared to a real world scenarios in which a thousandfold gap is not unusual3). If we do not couple wages, XYZ can increase this inequality even more by simply raising Sarah’s wage to 300€/hour. If our proposal is instituted, however, XYZ would be legally forbidden to decide this raise without also raising Marc’s Wage to at least 15€/hour. So XYZ can still reward the great job Sarah is doing by giving her a raise, but only if they let Marc participate in the company’s profit as well.

For us young greens, a greater wage equality is just and desirable. Coupling wages can – in theory – be a valuable instrument for ensuring wage justice, but there are a few practical problems we do not have solutions for as of now. For example, companies could avoid the maximum wage gap by outsourcing low-skilled workers to newly founded companies, where they could still be paid much less than workers staying in the original company. To solve this problem, we might want to take company ownership into account when determining the maximum wage. Unfortunately, one can also think of ways to avoid these rules as well. If the company is owned by 2 or more people, they can divide ownership of the separate companies in a way that the split companies are not connected through ownership, but share profits afterwards.

As you can see, we have not yet found the holy grail for solving this dilemma. However, this does not mean that wage coupling should not be discussed. Problems of practical implementation can be solved if qualified people work on it. One possible solution might be a basic income guarantee, which was also discussed during the conference. A basic income is a monthly cash transfer paid unconditionally to every citizen. Given that the amount of money transferred is high enough to live on, a basic income would constitute a general right to strike4. No employee would be forced to take a job, where he or she is not paid a decent wage. This could automatically raise the de facto minimum wage significantly as the bargaining power of workers increases.

By making the maximum wage gap a proposal in the conference, FYEG has put the issue on the agenda of the European green party, who should use its legal resources to evaluate the best way of implementation without loopholes. To make sure this really happens, we need to put pressure on green members of the European parliament. The best way to generate this pressure is by convincing the general public of the proposal. Let’s take it to the streets and complement our fight for redistribution of wealth with a fight for better primary distribution of income!

1 The Concept was first made popular by Peter Drucker over 30 years ago. See e.g. Drucker, Peter 1982:”The Changing World of Executive”, New York: Harper & Row

2 http://www.guardian.co.uk/commentisfree/2009/aug/06/maximum-pay-inequlity-executives (accessed on the 7th of May 2013)