The time has come for Cyprus to take over the Presidency of the European Council for the next six months. It is well known that it is a challenging time both for Cyprus and the European Union. The extended world financial crisis, the continuous occupation of Cyprus by the Turkish troops, the crisis in the Middle East and the democratic deficit of the EU are some of the major obstacles that the European Union is called to face, while Cyprus will be holding the Presidency. 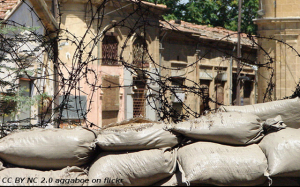 The financial crisis, which seems to be a rising monster for the governments, has brought the unemployment percentage to a peak that Cyprus has never faced before, even after the invasion of 1974. Unemployment has now reached 11%, while unemployment amongst youth has reached 22%. Unfortunately, increased unemployment in a lot of cases leads to the rise of racism and nationalism, as witnessed by the electoral results far-right political parties have achieved in several European countries lately.

The Cyprus Green Party has repeatedly campaigned for a Green New Deal, providing solutions to the economic crisis through green economy. It is believed that if Cyprus moves towards green development, the island can become a great example of successful green development, an economic miracle no less. According to the “Forecasts of Employment Needs in the Green Economy in Cyprus 2010-2013″ conducted by the Human Resource Development Authority of Cyprus (HRDA), it is estimated that the areas of agriculture, forestry and fisheries, electricity, natural gas and water supply, sewage treatment and waste are economic areas where green economy can be developed. Moreover, according to the same study, the green economy of Cyprus can employ 87,800 people in 2013, representing 22.0% of total employment.

The Cyprus Green Party and the Young Cyprus Greens have been calling upon the government to give an end to rising unemployment through the creation of green jobs. Most of the days of the year Cyprus are hit by sun rays, therefore solar energy can be the biggest energy source for the consumers. Nevertheless, the monopoly of the Electricity Authority of Cyprus does not allow for such a development, since the law does not permit the private sector to deliver more than 150 kW to households. The disastrous explosion at the naval base of Mari led to the destruction of the main electricity units of Vasilikos – and the death of thirteen people. The Cyprus government was not prepared for a plan B, leading the island to the energy crisis, which inevitably led to the economic and political crisis that the island faces today. And so Cyprus is forced to ask for financial support from the European Stability Mechanism.

The refusal of Turkey to continue the negotiations for a solution to the Cyprus Problem during the Presidency is one more obstacle that the European Union needs to handle. Turkey still maintains occupying troops on the territories of a Member State, while at the same time refuses to recognize the Republic of Cyprus, a member of the European Union. At the same time, Turkey is requesting full membership to the European Union, but insisting on setting its own rules and conditions. Considering that Turkey is a strong military, political and economic force in the area, the European Union is avoiding dealing with its deviations from the European acquis communautaire.

From the point of view of the Cyprus Green Party, the island should be free from foreign troops and each person should freely enjoy their human rights. The main element of an ecological solution to the Cyprus issue is the unity of the island of Cyprus, its people, its society and its ecosystem.  The respect of the human and political rights of its citizens and the assurance of  their dignity, social justice, independence and the abolishment of any foreign intervention in Cyprus are important and non-negotiable elements of the ecological approach to the solution of the Cyprus issue. Unfairness and illegality do not constitute justice. Based on this principle and on the fact that the settlement is a war crime, the settlers should withdraw and return to Turkey. The Greens consider the safeguarding of the right of all refugees to return to their homes, as a basic principle for the solution of the Cyprus issue – Greek Cypriots and Turkish Cypriots.

The Cyprus Government is going through a challenging period that requires strong political will, diplomacy and cooperation with its equal European partners. Unity is something that should characterize the European Union especially at the present moment, when the European Union project is facing significant skepticism. In order to defeat the financial, political and environmental difficulties that are threatening our world today, the European Union should avoid the further suppression of its people (eg. Greece, Spain, Italy, etc.) and seek unity.