This autumn the fossil fuel divestment campaign is heading to Europe and it has one aim. To stop an industry thats business model is based on catastrophically changing the planet’s climate.

Efforts have got off to a great start. Earlier this month saw the release of a new report by the Smith School of Economics, at Oxford University, titled ‘Stranded Assets and the Fossil Fuel Divestment Campaign: What Does Divestment Mean for the Valuation of Fossil Fuel Assets?’ which confirmed that the campaign is on track to have a significant impact on the fossil fuel industry.

The intellectual foundations of the divestment campaign are based on the understanding of three numbers identified by the Carbon Tracker Initiative, a group of financial analysts in the UK. After trawling through the annual reports of the 200 biggest fossil fuel companies, they found that combined, the industry has access to 2795 gigatonnes of carbon dioxide in their reserves. With even the most conservative governments in the world agreeing that global warming should be limited to no more than 2°C, which translates to a carbon budget of 565 gigatonnes of carbon dioxide, the fossil fuel industry is currently planning to burn over five times more than is safe — and not only that, everyday they’re spending millions looking for more.

So how does divestment work? What does this process of stigmatisation look like in practice?

We all are part of or interact with institutions that are entrusted with our money and/or welfare. Be that religious institutions, universities, municipal councils, banks and pension funds. Each one of these institutions has either money under direct control, via investments in stocks and shares, and/or pays large amounts on behalf of its members into savings and pension schemes. Divestment is simply the process of demanding (loudly and in public) that these institutions, remove the money that they have responsibility for from investments in the fossil fuel industry. Normally this starts with a petition aimed at the institutions administration as well as letters asking for meetings and responses to divestment demands, but could also lead to demonstrations, sitin’s and other more direct forms of action to make the divestment conversation unavoidable.

The strategy is already working. 350.org launched the divestment campaign last autumn and the movement has already spread to over 300 colleges and universities and 100 cities and states in the United States, Australia, and Canada. Over 15 cities, six colleges, and numerous religious institutions, have already committed to dump their fossil fuel holdings.

The divestment campaign strength lies in its replicability, its distributed nature and the ease at which it can be picked up and run by anyone. With it’s focus on multiple institutions all of which can be found on most peoples doorstep, for anyone interested in campaigning on climate change, divestment and the Fossil Free movement is a great opportunity to have a significant impact and get active wherever you are. 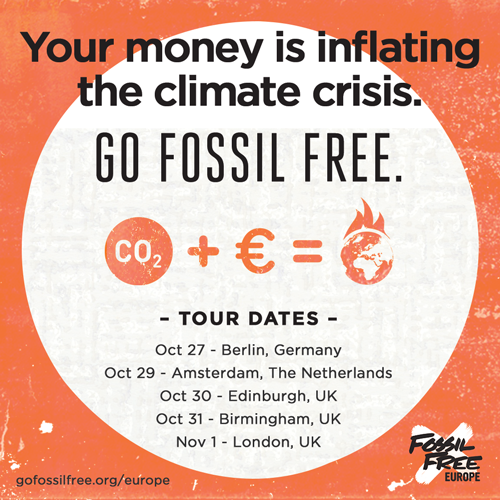 From the 27th October to the 1st November, 350.org’s co-founder Bill McKibben and the 350.org crew is organising a tour to help build an European movement in favor of a fossil-free Europe. 350.org is a global movement aimed at enhancing communities to solve the climate crisis. To participate in one of the cities concerned by the tour, you can get a ticket http://gofossilfree.org/europe/ or organise a screening in your city from the 1st November conference in London that will be live streamed .