600 Green Persons from all over Europe meeting in the same town? MEPs, party leaders, delegates from all countries, people from CDN, from different green foundations and of course, from FYEG coming all together: I guess that’s what they call an European Green Party Council. This time it took place in Istanbul. Ironically in the Intercontinental Hotel, directly at Taksim square and Gezi Park, where not long ago lots of green activists and students fought against Erdogan, who is trying to turn Turkey more and more back into an undemocratic authoritarian state. I was there as a member of the Ecosprinter Editorial Board to get a better inside view into our mother organisation. Four interesting days were ahead.

Many speeches and discussions

As usual in those kinds of assemblies, the most frequented place is probably the plenary. Many keynote speeches were held, for example by Cem Özdemir, Reinhold Bütikofer and Monica Frassoni. Then the people in the plenary discuss all the important topics that recently occured, which especially this time was a lot of stuff. Main topics this time were the crisis in Ukraine and of course ISIS (or Daesh, how it’s lately called). Some experts, journalists and activists were invited to discuss with us about the situation in their countries and explain the problems from first sight. Obviously this is a good way for all of us to learn more about the situation and thus create a more reflected political position.
Workshops over Workshops

To give people more practical input on political topics, there are also lots of different workshops. For example I visited two workshops on new media and the Global Greens. In the workshop on New Media and Digital Resistance, we talked a lot about different new ways of journalism and participation in the building of public knowledge and opinion. In the beginning, we introduced our projects to each other e.g. the Green European Journal, the Yeşil Gazete (Turkish Green Newspaper) the Green Thought Foundation (Turkish Green Thinktank, engaged in youth participation), and I introduced the Ecosprinter. There’s a lot of exchange, a lot of networking and connecting. It felt good to hear of such innovative projects, as platforms that empower people to be journalists on their own, people building up big lobby registers, and journalists questioning the power of oppressive regimes with unbelievable braveness.

The other workshop was a network meeting of the Global Greens in Europe. Here I learnt a lot about the relatively new organisation. After the Global Greens Congress in 2012, many things started to move. The newly elected Steering Commitee established itself as an official organisation, created their own political platform, started fundraising*, exchanging knowledge, engaging a Secretary General and much much more. Things have really started rolling within that formerly weak organisation. And it feels good to see so many enthusiastic people, who want to change the world to be a better place by connecting all the activists for common goals: Or as said by Victória, our SecGen: “We’re facing global problems, so we need to have a global approach“ 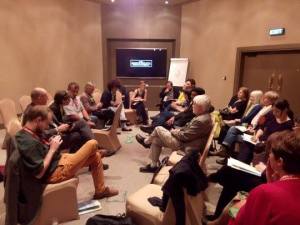 As in most green meetings, there are many decisions to be made, be it about elections, a political platform or the structures of our organisation. In this assembly, we elected a new secretary general for the EGP. There were four female candidates and it was an interesting voting session. Finally, the delegates decided to vote for Mar Garcia Sanz from Spain.

FYEG tries to bring in their positions into many of the political resolutions and to change many things that are not considered to fit into FYEGs political understanding. There are amendments over amendments, and various resolutions and often the propositions are sucessful. Unfortunately, we weren’t able to prevent the Council from voting for a change in the internal rules of procedure, which will prolong the mandate of the executive comitee up to four years… In our opinion, giving mandates that long to such few people decreases the democracy within the party.

Aside from few negative things, we managed to have some very good impacts on Green Program. We manage to pass a resolution on the very important issue of ebola and bring in some demands to help the people hit by it, as well as some concepts to prevent such crises in the future.

No one can work all the time… So we also enjoyed the evenings very much. Having some locals at our side, we experience the quite beautiful city of Istanbul at night. Streets with flashing neon lights, vendors selling chestnuts, corn, oysters and much more every few blocks, musicians everywhere, lanterns, narrow passages with small corner shops and cozy bars and pubs. 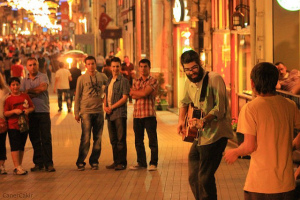 All in all, pretty much worth it

After four unbelievably interesting, overwhelming days, I had to go back to Germany. Many sessions, workshops, discussions, debates and long evenings later, I felt tired, but very, very lucky. It’s good to know that everywhere in Europe, people fight for common goals. On such occasions, you can see the idea of a common Europe, which we always fight to create is already alive. Such occasions show me perfectly well why none of the minutes, hours, days, weeks and years I spend on political engagement are worth every second!
by Marc Buschlüter

* if you want to support Global Greens financially, which they really need, you can do it here http://www.globalgreens.org/civicrm/contribute/transact?reset=1&id=7