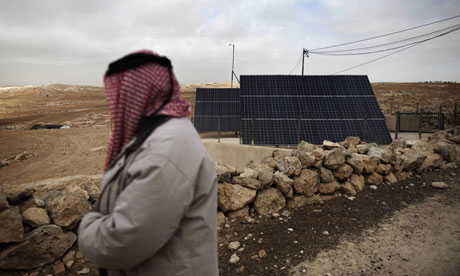 If there has to be one resource that God gave to the inhabitants of the Holy Land, it should definitely be the Sun. The sun that dries up, that makes the waters of the Dead Sea and the Kinneret evaporating at an alarming rate, but also the one that provides the vital energy to cook meals, brings light when the sky darkens and warms the water when it’s time to clean up. At the moment when Energetic transition is discussed widely in European Countries, debating the switch from fossil energies to renewables, couldn´t the Middle East be leading the path ?

In the Palestinian Territories, the idea is growing up widely. With 10% of energetic demand increase per year, the almost complete dependence on Israeli supply, its cost and scarcity, is pushing Palestinians, further than environmental concerns, for a precious energy security. In 2009, the Palestinian Authority spent USD 374 millions for energy, more than 95% of it being imported, mainly from Israel and with small amounts from Egypt and Jordan. With the difficult financial situation for many inhabitants of the West Bank, many can not afford the high prices imposed on the imported kilowatt-hour ( about 15% more than in the US or in Israel)1.Meeting environmental issues with economical and political stress could well be an accelerator for energetic transition initiatives in the Palestinian Territories.

And many initiatives in this direction seem to prove this fact. The 2010 Palestine Investment Conference (PIC) gave great prominence to the renewable energy sector, and the common use of solar energy could shame many of the European counterparts. According to a 2010 survey on Household Energy led by the Palestinian Central Bureau of Statistics
(PCBS), over 60% of households were using solar water heaters, the highest rate in the region.(2) Firms such as MENA Geothermal, based in Ramallah, winner for the second time of the Energy Globe award (3), encourage an innovative system piping cool air from deep below the earth’s surface to provide air-conditioning in hot summer days. In rural areas, use of biomass (4) is widespread, and one can see the development of other renewable technologies, from wind energy plants to photovoltaic.

However, this move to renewables should not be relate to a better acknowledgement and awareness of ecological matters than anywhere else, but rather to basic economics : with 300 sunny days per year, it is financially logical to prefer solar water heaters to their electrical counterparts. Most of these efforts are pushed up by the private sector, in the blank hole left by the surprising inaction of the authorities, but with an increasing support of international donors. The World Bank and the European Union are widely investing in this promising sector in the Palestinian Territories. The huge support of the European Commission for renewables initiatives for example, is in this way highlighting the willing
for international investors to back up environmental conservation and sustainable development as a way out of the conflict for a two-state resolution.(5)

Surprisingly, the creativity of these green energy entrepreneurs is somehow enhanced by the many political barriers standing in this conflictual region. Indeed, Israeli occupation in Area C (6) make the implementation of such sustainable projects difficult in many ways ;
the 150 000 Palestinians living in this land having to get an authorisation from Israel for any construction, including water and electricity networks. UN officials said that permits were allocated on the only 1% territory having an Israeli-approved zoning plan, « most of which [being]already built-up » …These barriers force the Green energy advocates to take benefit from the gifts of nature in an isolated and restricted environment, watching the spring up of wind and solar energy systems all around the region. Solar plants becomes a sustainable solution, but also, and beforehand, a desperate one : « Solar is our only choice because building is forbidden by the Israelis », says Aziz Muhammad Hadhalin, engineer and community activist in Um Al-Kher (7).

Energetic independence, financial economies, job creations and investments increase, decrease of polluting emissions, the energetic transition seems in the Palestinian Territories more urgent than anywhere else – maybe also as a precondition for the creation of an autonomous state. The Palestinian Authority should take all the measure of the challenges of the announced energetic crisis in the Palestinian Territories;
when economics is at stake, only an increase in awareness for green issues within the population will help solving it.

4 Use of aricultural waste for heating and cooking

5 the [israeli] army issued demolition warnings against six solar and wind power systems in the South Hebron hills, which were funded by European governments and development groups  http://www.medico.de/en/themes/rights/documents/arrested-development/1218/

6 As defined in Oslo Agreements