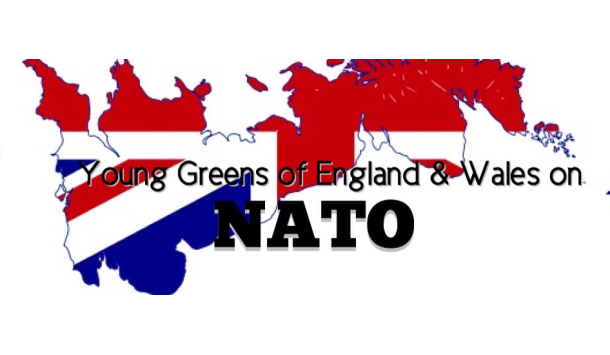 Continuing in our series, we reach the Young Greens of England and Wales. As an integral player within NATO, the United Kingdom is unlikely to leave anytime soon. Yet it is not to say that its a harmonious decision for all of those who call the UK home- including the Young Greens.

These questions were answered by Georgia Elander on behalf of the Young Greens of England and Wales.

The Young Greens of England and Wales’ Official Position on NATO:

PD513 The North Atlantic Treaty Organisation (NATO) is a military-oriented body, which imposes conflict cessation rather than encouraging peace building. As such, it is not a sustainable mechanism for maintaining peace in the world. We would take the UK out of NATO unilaterally. We would also end the so-called “special relationship” between the UK and the US.

PD514 The Green Party sees the OSCE as the most suitable existing forum for developing peace across Europe.

PD515 We believe that increased effectiveness and development of the OSCE require a transfer of resources to it from other security institutions such as NATO and the WEU.

How do you deal with this perspective given English history?

I think that our position very clearly takes into account lessons from English history. The First World War, one of the most horrific episodes in English history, was a result of military alliances forcing the nations involved into a conflict which had nothing to do with them. Looking forward, it’s very important that international organisations focus not on military retaliation and nuclear deterrence but on conflict resolution, aid, and international development.

The Young Greens’ policy follows the official Green Party policy on this issue, as with all policies. The Green Party has a strong history of opposing war, and therefore this policy is entirely fitting.

In what ways do you think that the Greens have/will affected the debate on NATO in England?

So far, NATO is not an issue on which the Greens have had a chance to contribute to debate in recent years. However, going forward I think we have a lot to offer to this debate, especially given our unique position on the subject. As the party gains popularity – as it has been doing steadily all year – it is inevitable that our policies on defence and international affairs will be talked about more, and we’ll have a chance to offer the public a fresh perspective.

Has the English perspective on NATO have changed in the past couple of years?

These days, I don’t think that NATO is something which the majority of people in England have strong opinions on, or are even very aware of. However, with recent events in the middle east, Cameron and other world leaders have spoken about the need to strengthen the NATO alliance. Cameron has pledged that the UK will contribute 1,000 troops to a new NATO force, showing that the UK is far from departing from its military emphasis in foreign policy.

The crisis has certainly made issues surrounding NATO more prominent. The escalation of threats from both NATO and Russia, and the rising tension between the opposing parties, obviously – and worryingly – echoes the Cold War. This should serve as a reminder that military threats and exclusive alliances are not effective peacekeeping mechanisms.