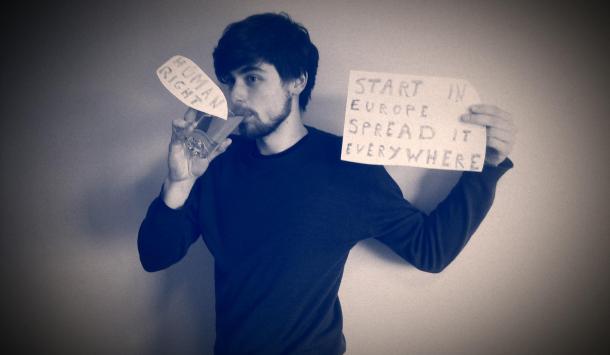 The so called European Citizens Initiative (ECI) has started almost a year ago in April 2012. A citizens committee made of at least seven members from seven European Union countries needs to collect 1 million signatures. If they succeed, the Commission may consider their proposal and start a legislative act. This is not perfect, but still the first transnational tool of direct democracy in human history.

The  ECI exists somewhere in between the desert of a petition and the  fruitful lands of a powerful referendum, which might force political  institutions to take legislative acts. Is the ECI a waste of resources  and time? What happens, if the Commission simply ignores an ECI? They  certainly could, but they should not, if Barroso talks in his “state of the  union” speech about a necessary treaty change and ‘more European  democracy’.(1)  During elections in many European countries the ‘democratic deficit’ of  the European Union is an important argument of populist parties, who  gain support for their European-sceptical agenda. A democratic reform is necessary to weaken those populist powers.  One out of many necessary steps towards a democratic reform of the European Union is the tool of initiative and referendum accessible for all European Citizens. Our ECI is far away from being such a powerful instrument, but the procedures are the same. Direct Democracy in Europe needs a European public sphere and transnational networks of engaged citizens. This infrastructure will not fall down from the sky. It is upon us to use the ECI as a first step towards such a network. If one European voice delivers a good developed idea towards the Commission, they might be a little bit impressed. Maybe even so impressed, that they take the brave step of reforming the ECI and giving it the power, which it deserves.

So far, various ECIs are registered. (2) The topics are as diverse as the political groups, which started ECIs. Initiatives to ensure Media Pluralism, abolish animal experiments or guarantee a human right to water are opposed by initiatives to stop climate protection financing and others. As much as the topics of the initiatives differ the level of infrastructure differs. Some initiatives have received large amounts of money and were able to translate their legislative proposal into many languages. Others need to rely on an English text and almost no ressources.   The Democracy Working Group of FYEG has developed a strategy, how FYEG can handle the support of an ECI. (3) Following this strategy the first step for a support of an ECI is to get 10 Member Organisations of FYEG in a network of supporters.

The Democracy Working Group of FYEG has one favourite initiative – the ‘Water is a Human Right’ one. (4) It is the only initiative, which overcame the technical difficulties of the beginning and organized an online collection of signatures. This initiative strives for a Human Right to Water.

Not just EU citizens, but every other human should enjoy access to water and sanitation. Not even every country of  the European Union satisfies those aspirations. Additionally as an actor on the global level the EU can help other countries to ensure this basic human right with financial help. The Democracy Working Group outreached the self set goal for the start of an ECI support campaign. We gained the support of twelve FYEG Member Organisations in order to help the Water is a human right initiative to collect signatures. Our ECI campaign team organizes events in several European Member States and stays in contact with the organisers of the right2water initiative. Meanwhile FYEG is one of the VIP supporters of the right2water initiative. Until today the initiative has collected more than 1.000.000 signatures, but additional help is needed. Every additional signature increases the political pressure upon the Commission. Only enough public engagement and critique can lead to a policy shift.

If you want to stay informed, like our Facebook-Campaign Page: http://www.facebook.com/FyegECI or sign the initiative at: http://right2water.eu/

Finally the success of this new tool depends upon us – sign the ECIs, join the network, collect signatures – online and offline! A European public sphere needs citizens, who build it.