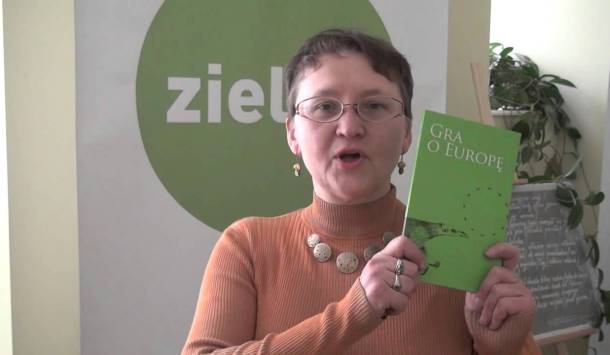 The climate summit COP-19 in Warsaw, November 11. – 22., 2013, is a very important event for Polish Greens. Greens are the only political movement in Poland that have always defended the option of ambitious EU climate and energy policy, and claimed the same for Poland. We hope that the media, thanks to numerous conferences and debates that bring opportunities to deepen their knowledge about climate change, will cease to spread sceptical opinions about the role of humans in the quick evolution of the climate of the Earth. To let our Green voices be heard, Polish Green Party Zieloni and its green foundation Fundacja Strefa Zieleni (Green Zone Foundation) are co-organizers and active participants of many events, in partnership with Greens/EFA group in the European Parliament and Heinrich Böll Foundation in Poland, but also with Polish Youth Climate Network and other NGOs and civic movements. For instance, on 14th November, from 2pm to 6:30pm, there will be a conference on “Energy Transition – necessity or opportunity? Three cases: Germany, France, Poland “, organized by Green Zone Foundation and Heinrich Böll Foundation Poland in the temporary conference hall in front of the Palace of Culture and Science.

Another interesting event, an ambitious two-day conference entitled “Citizens’ energy for a good climate : A participatory debate about Poland and its future”, with Rebecca Harms, Jose Bove and other Green MEPs, will be organized by Greens/EFA EP group on November 15th and 16th, in partnership with the Polish party Zieloni. Some leaders of Polish Green Party Zieloni will also participate, with the both co-chairs of the party Agnieszka Cone and Adam Ostolski.

MEPs Rebecca Harms and Jose Bové will meet the day before the conference, in the South-East of Poland, where the farmers of Zurawlow have been protesting for more than 4 months already against Chevron’s attempts to drill in their backyard for shale gas exploration using the controversial technology of fracking. Green Zone Foundation, very much involved in anti-fracking movement in Poland, is helping to bring the farmers from Zurawlow to Warsaw for all green activities, starting the same evening by the documentary of Lech Kowalski “Drill, Baby, Drill” in presence of the director and of the heroes of the film.

On 16th November, at 2 p.m., all the participants of the Greens/EFA conference will join the international march for Climate and Social Justice, organized by a Committee of NGOs coordinated by Green Zone Foundation. A special train will bring around 700 activists from Brussels (by Climate and Social Justice NGO). The march will finish by a “Climate Hyde Park” in Skaryszewski Park, just behind the COP-19 site, where every participating organization will have an opportunity to send their three-minute climate message, and to put it (in a written form) to the “Climate Hyde Park Box”. All messages will be published after the march. The green events of the first week of the COP-19 will finish on Sunday November 17th, 9 -11 a.m., by round table of Green Party, NGOs and trade unions: ”Social dialogue for the right climate”, in the temporary conference hall in front of the Palace of Culture .

Green Zone Foundation and Youth Climate Network invite you as well to the club Nowy Wspaniały Swiat (the corner of Nowy Swiat and Swiętokrzyska streets) for the debate on social and environmental business responsibility and on circular economy, on 22nd November at 6 p.m. During all the period of the climate nogotiations, Green Zone Foundation, Heinrich Böll Foundation Poland and Polish Youth Climate Network run together a stand with newspapers and brochures, at the exhibition space of the City of Warsaw on the 2nd floor of the Palace of Culture and Science. Throughout the events, Green Zone Foundation will be distributing “Zielone Wiadomości” (Green News) special COP-19 edition, and the Polish edition of the Suisse magazine LaRevueDurable, a special edition about ecology in Poland.