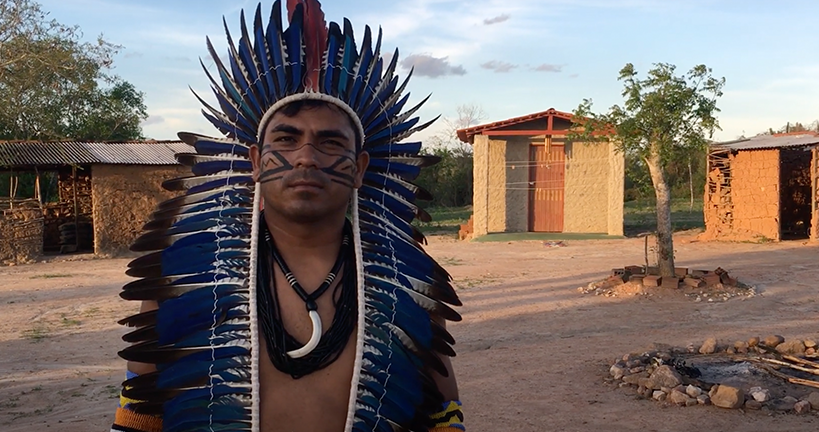 Indigenous communities play one of the most important roles in the protection of the planet. Their inhabited territories preserve 80% of the planet’s biodiversity, yet they make up only 6% of the population. Indigenous territories are essential for keeping the balance within the ecosystem, because they function as sanctuaries for the threatened wildlife and endangered species.

Today indigenous people are not only fighting for the preservation of nature, but increasingly for their own survival, self-determination, the right to own territories, and the continuation of their culture and ancient traditions. They use techniques passed down by generations to care for and preserve the land they live upon and the nature they live alongside.

Whilst all global citizens are entitled to basic human rights, these are often not respected, or blatantly undermined, in regard to indigenous communities. Because these communities are generally denied political representation, they have limited means to defend their own rights.

In Brazil, Pajè Pawana is working with his tribe to protect his roots and his land from the government. He lives with his tribe “Kariri-Xocó” in the state of Alagoas in the northeast of Brazil. Following his mission, he guides his community and teaches a greater understanding of their traditional way of living and our Mother Earth (called “Pachamama”).

Across Brazil, Pawana practices traditional rituals to recall the power of his ancestors. At different events, he performs ancient tribal songs and dances for a wide audience with his group “Grupo Sabuka”. A few years ago, he began a cultural exchange between his community and the people of the western world.

Juma Vitali (in the tribe called Wruãna) began to work with the indigenous community in 2018. Together with her partner Bakatym, she dedicates her life today to bring the knowledge and the ancient wisdom received from the tribe into the world. They support, wherever possible, the indigenous people of Brazil in their daily struggle to preserve their culture. In order to make this possible, and above all to secure the livelihood of the community within the existing capitalistic governmental system, the “Cabocla” tribe started to develop. With this is an association and a new cultural center for the Kariri-Xocós, the “Centro Cultura Sabuká”. The center is used to sell traditionally made handicrafts and organise the cultural exchanges between the Western world and indigenous communities in Brazil.

In the following interview Wruãna and Pawana give us a personal insight into the daily challenges of the Kariri-Xocó tribe:

Pajè Pawana: In the indigenous language, Pawana, adorned with feathers, begins by thanking the ancestral forces that  brought us together here today.

Kariri Xocó is a tribe of 1020 families living on 800 hectares. Our river, our land on which we depend spiritually  and which has always given us food and water, has been stolen from us for more than fifty years. They denied us access to the river “Opara”, which is only thirty meters away from me.  We were not created to live in stone cities. We cannot survive with a culture that is not ours. If we are still alive, it is  because of our spiritual connection to nature. The experiences that we personally have had as Kariri Xocó with  the Lula government and the Bolsonaro government are both positive and negative. Let’s say there were the quality and  the shortcomings. The merit of Lula was to bring equality to the Brazilian people. We often traveled to sell our country (for clarification: they were displaced or mostly left without choice) and we realized how much he helped our white  brothers to open up to the value of equality. And he also helped us survive. On the other hand, on the issue of territorial  redistribution, he was not very successful. With Bolsonaro, the experience was a thousand times worse. The inequality returned. He declared in front of the whole  world that he would not give back a millimeter of land to us indigenous people and that an indigenous person is  comparable to any Brazilian citizen. But to say that is profoundly wrong, that an indigenous person is  is just another grain of salt. It is impossible to force us to live a culture different from ours.  I cannot be white. I cannot live in a city. I am Kariri Xocó, I can live in my forest, on my land, my river. I plant. I know what I plant. I don’t know how to live in this colonizing capitalist system, that is imposed on me, as well as on every native here  in Brazil.

Pajè Juma Wruãna: Pawana, how do you see the cultural exchange, that took place in 2018 with our European people  from the Cabocla tribe and the Sabuka center, that you now have in the village to welcome us foreigners?

Pajè Pawana: We with you feel “counted together”. We and you. People think that we indigenous people are a minority,  but it is not true. This is the proof of it. We are in the whole world and the whole world is in us. We complete ourselves.  When you come here, you feel that an unexplainable void that was inside you before is filled. We give you wealth.  What is wealth? Nature, love, joy, care, traditional spiritual practices. Any European who comes home with new ideas  does not return the same to the Stone Forest. You, Wruãna always “throw an arrow” so that we can reach a ‘patamà’ (a solution) of happiness, prosperity and  development, that we desire. The Sabuka Center is a base of cultural nourishment for all humanity, from Italy, from  Germany, from Slovenia. You have already brought them here. Our desire is to grow more and more. We want to be  a reference for the whole world.

Pajè Juma Wruãna: How is the relationship between men and women in the indigenous reality?

Pajè Pawana: In our Kariri Xocó there are no inequalities between men and women. The woman has the same freedom as the man. She is not stronger than the man and not the other way around.  We follow the moon and the sun. They know what their tasks are.

Pajè Juma Wruãna: What does the Sabuka Center need now to support the “Aldeia” (the village) in this critical economic  situation? Since the government has recently denied food aid to the women, the situation is very difficult.

Pajè Pawana: Yes, you know, Wruãna, here they don’t allow us to fish or hunt. So we have to earn money. This is not our  mentality. We started farming, but it’s a slow process. We travel to neighboring towns to sell our handicrafts and to  schools and centers that invite us to give courses on Kariri Xocó culture. But we urgently need a van, which costs 30,000  reais. As you suggested, we created a PayPal for our association.

Pajè Juma Wruãna: In the last decades, many communities have emerged, many ecovillages which did not survive.  You are a millennial community, what is the secret?

Pajè Pawana: First of all, you need a leader, who has a lot of strength to guide his people. Because there is no leadership  without people and there is no people without leadership. You have to learn to live together in that balance. You have to  walk together in that balance. And the secret of all this is in spirituality. If a community is born and does not believe,  does not live, does not have total faith in its spirituality and wants to live only in material reality, it will not have love, joy,  peace and prosperity. So the secret is in spirituality. It’s all about this. To seek, to live, to believe, to love and to preserve.  The whole secret is in the spiritual “base”. Spirituality has created water, earth, air, fire and plants. We sjould not forget  even the modern buildings are built in spirituality. Here they have destroyed ours, we have only ourselves now, but I tell you this: As long as there is only one ant, only one leaf left, the Kariri Xocò will exist, no one can destroy our essence,  our blood, our soul.

Visit the Cabocla on their website (www.caboclatribe.com) or social media accounts (@caboclatribe) and learn more.
Find videos and songs of the indigenous people and the tribe on the official YouTube channel: www.youtube.com/caboclatribe