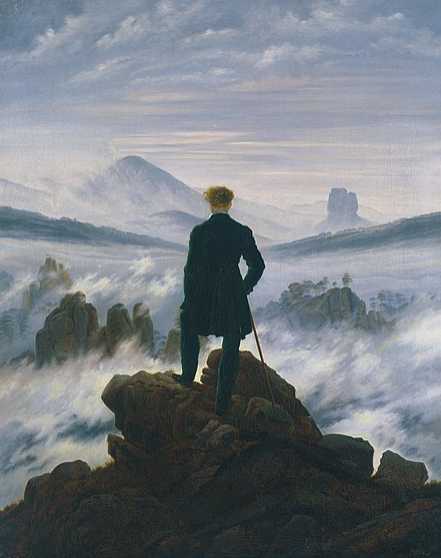 William Wordsworth (1770-1850), a romantic poet, suffered a lot from identity crises during his adolescent years. The deep grief he experienced after the early loss of parents, the pressure he was exposed to by his relatives and “the discriminating powers of the mind” * —thanks to the artifacts of civilization, made him crave for freedom and independence. It was only through the end of his twenties that he managed to come to terms with all the problems. And for him, there is one very effective escape out of them: nature.

Wordsworth believes humanity has a mental system that helps recreate nature. This creative system suggests that nature and human cooperate to elevate each other through the power of imagination. He says that in his imagination, “nature spoke to [him]” and guided him out of his problems. It is through this romantic belief that he managed to find consolation to his griefs, improve his imagination, gain freedom and independence.

At the age of 29, Wordsworth settled in the Lake District where he was born and spent his childhood. The return to countryside made him remember his close intimacy with nature. All the essences of experiences are actually the presences of nature. Such a realization would inevitably deconstruct the misled identity. And recreate a revival.

While the sweet breath of heaven,

Was blowing on my body,

Vexing its own creation

The change he feels within himself after the return to nature. He employs natural phenomenon as symbols of his feelings and suggests that they help him gain virtue and energy. He reminds with his lines that we are part of nature, it is not something out there when one goes to visit from time to time. This divine elevation of human morality and physical health is so high that even its own creation is baffled.

And their congenial powers, that, while they join,

In breaking up a long-continued frost.

The identity crisis majority of people experience within civilization is like a “long-continued frost”. Reviving a close intimacy with nature breaks the frost and sets us free. Within the freedom nature provides us, we can be as creative, optimistic, enlightened as possible.

From the vast city, where I long had pinned.

Free as a bird to settle where I will

How much the crowded city life, all the modern stimulus restrains one from exploring the true self. It is a tautology that we must be in a quiet, isolated, and natural environment to really be able to creatively and truthfully discover who we are. Wordsworth finds relief in the nature, where there are no predetermined routes and life purposes. Recreation of nature shakes off “that burthen of [his] unnatural self”. In nature, life is not bordered anymore—it boosts freedom of expression, creativity, “wisdom and spirit of the universe”, and it consists the very essences of feelings and thoughts.

Nature is our teacher. Wordsworth thinks the nature has the power to teach us much more than books. When he flashbacks to his younger self, described as a “naked savage”, his only teacher was the reaction of nature.

Overpowered my better reason, and the bird

Became my prey; and when the deed was done

I heard among the solitary hills

Nature constantly teaches morality for those who are open to understand it. In another flashback, Wordsworth tells a story of him stealing a boat and, suddenly, a huge mountain teaching little William that what he has done is wrong. After this incident, William was drawn into unspoken ideas about the universe. Owing to his close intimacy with nature, he accomplished an individual arduous odyssey from youth to maturity. Even when he was just a little child, he started thinking about:

Huge and mighty forms, that do not live

Such ideas have always resided in his mind and with time, they were evolved to be consolation to his deep grieves. Internalizing the philosophies of nature helps humanity attributing meaning to their lives. We are part of a cosmic process of becoming, a sublime harmony. Embracing the cosmic unity surely is a resolution to many of our trivial issues.

* All the verses are from William Wordsworth’s “Prelude”.

Serkan Kasapoglu is a literature student, queer, feminist, romantic, and a nature lover. In their free time they slay as a drag queen and provoke social norms.