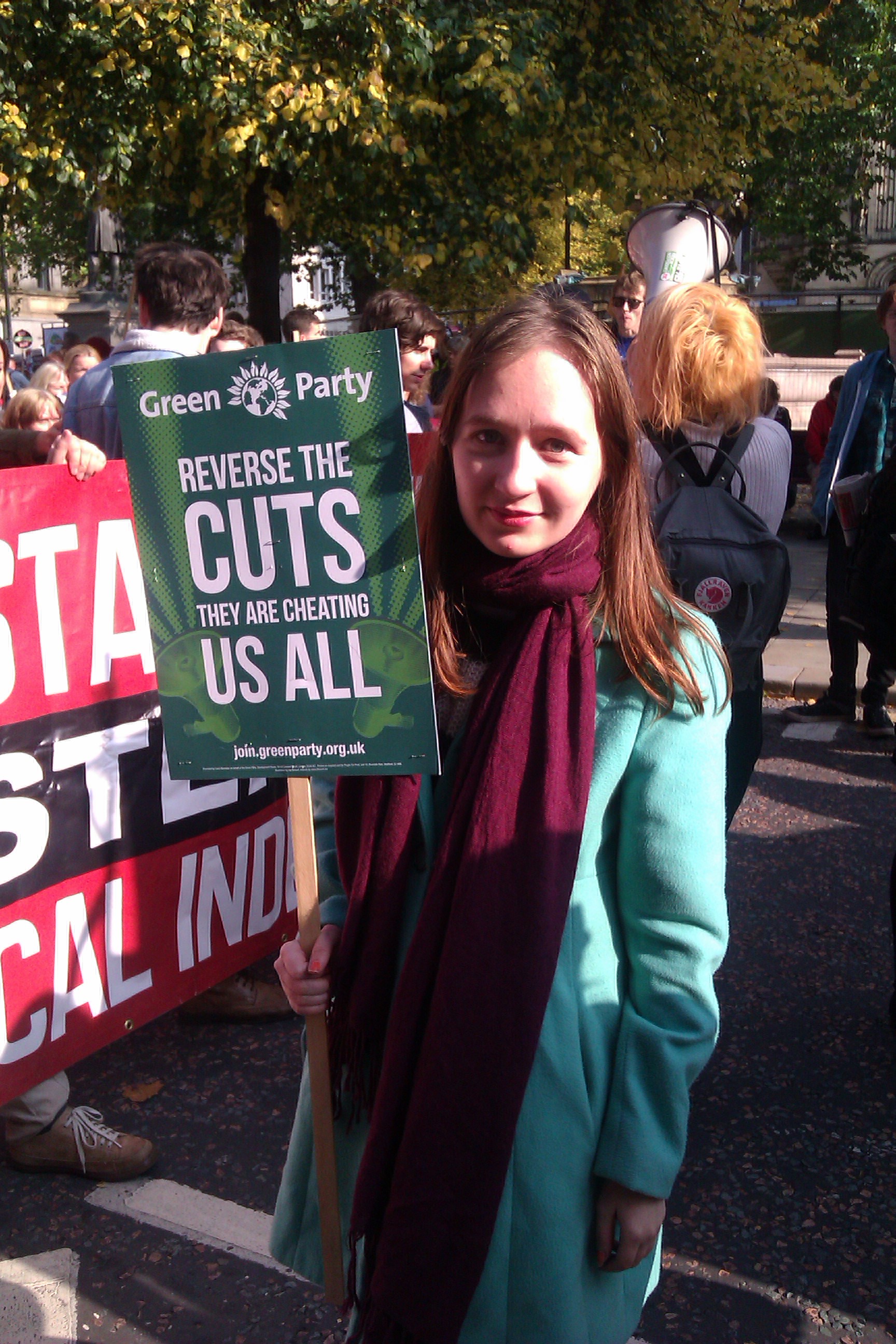 On October 4th 2015 I was one of the 60,000 plus protesters, united in a protest against Conservatives outside of their Party Conference. Surrounded by a ring of steel, by Manchester police, private security companies, snipers on roofs and what appeared to be a helicopter flying around us, Conservative members watched over 60,000 protesters walking by them from the roof. Despite travelling over 8 hours that day, here’s why I would do it again and why next time you should join me:

Another five years of a conservative government

When the exit poll came back as a conservative majority on the 7th of May I couldn’t believe it. Maybe I didn’t want to believe it after campaigning for the Greens throughout most of  the spring. Maybe it was because I didn’t know anyone voting conservative in Scotland (only 14% did in the last General Election). Possibly it was because as a public sector worker and a fairly recent graduate I just didn’t want to see more cuts. I also realised that a Conservative majority would be much worse than the coalition of the previous five years, after all the manifesto proposed a referendum on European membership, £12 billion of welfare cuts and the banning of the human rights act. So naturally when it happened I was crushed, not wanting to take part in any political activities for a good few weeks, terrified of what would follow. While it is often argued that Conservative majority should be respected, the actual percentage of people who voted for them was 23% in the UK, with Scotland being a lot lower. When you think about this, the Conservative victory and policies seem unjust. Part of the problem is the voting system, with past the post ensuring that only the big parties stay in power (this makes Greens 1 million voters seem invisible with only one seat in the UK parliament) but it is another part is the manifesto with which Conservatives got elected. This is why when I had the chance to oppose them, I jumped on it. The Conservatives may be in power, but they should not be allowed to forget there will be plenty of people who will challenge them or make pig masks.

Over the last year has your wage gone up by more than 12%? Well rents did. Have you had to get a job on a 0 hour contract? Well they have increased by 19% this year too. Maybe you are under 25 years old looking for help through housing benefit or someone who relies on working tax credits which will now be cut. Conservative austerity policy dominates every aspect of our lives and this is why it vital to stand up against it. Seeing doctors, environmental campaigners, teachers, union members and students made me realise the real extent of the people effected by austerity and made me more motivated to fight for our rights, which are being destroyed for the sake of right wing ideology, as shown by economists such as Krugman. By meeting other activists, England and Wales greens and people who were passionate to standing up against austerity I have taken a first step in organising future campaigns, talked about my experience in Scotland and listened to horrific stories about NHS, benefits and education worth repeating. It was inspiring to thinks that a lot more gathered outside the conference (60-85,000) than inside (up to 12,000).

I remember sitting in a media class and hearing our lecturer describe the weird feeling when you have been through an event covered by the media and felt like it wasn’t covered realistically. This day made me realise what he meant. Fighting austerity is hard when it’s the main government ideology, the protest was restricted (with roads into Manchester and the main venue closed for some of the day) and the event being played down as violent. Although this is obvious without going to a protest, living through something which then becomes news worthy opens your eyes to the scary reality of it. At the start of the day I heard a protester say ‘I bet the media says there were about 500 people at the march’ and to extent this was true, the event was downplayed despite protesters stretching for miles. Additionally, the coverage focussed on the young Conservative getting egged and five people that were arrested. Many of the stories neglected to mention that he was carrying a picture of Thatcher or the peaceful atmosphere at the march.  This is what inspired me to write about the protest, to tell others to share their pictures and to encourage writing any time there is a cause worth fighting for. If we don’t get positive media coverage, let’s create it ourselves.

One person can make a difference

I had plans on Sunday, I don’t like buses or early starts and I did think to myself, can I really make that much difference? Does it even matter anymore? Turns out it does. While taking part in a protest is a small step, it has the power to become news, to worry conservative members (who watched us marching from the roof tops) and to inspire people all over to become politically involved. Even if one more person challenges the next pro austerity article they read, lobbies their MP or joins a political campaign, the march has been a success in my eyes. The march itself felt very inclusive with people of all ages joining in, hugging, supporting one another, I realised walking through the city that I could have easily just stayed in bed and so could have everyone else there.

Being part of something bigger is inspiring

At the start of the day I heard Billy Bragg talking about the first time he became politically engaged in the 70s and the amazing feeling it was, to some extent this reflected my own thoughts when I came out of the bus and saw a street full of protesters as far as the eye could see, it was truly an amazing feeling. Talking to doctors about junior contracts or to teachers about the 60+ hours working weeks or to students who will face the highest tuition fees in history was both difficult and inspiring at the same time. Walking for miles with a banner, while tiring was also a good exercise and a great way to see Manchester. I also felt able to express my anger, to speak my mind and to stand up for what I believe in. Throughout the day we heard Billy Bragg perform, Charlotte Church speak, a guy singing about bedroom tax and saw a performance art involving George Osbourne. It was an unbelievably sunny day, that some have since called ‘socialist sunshine’. So next time an anti-austerity action is organised, do join in or start your own. You won’t regret it.