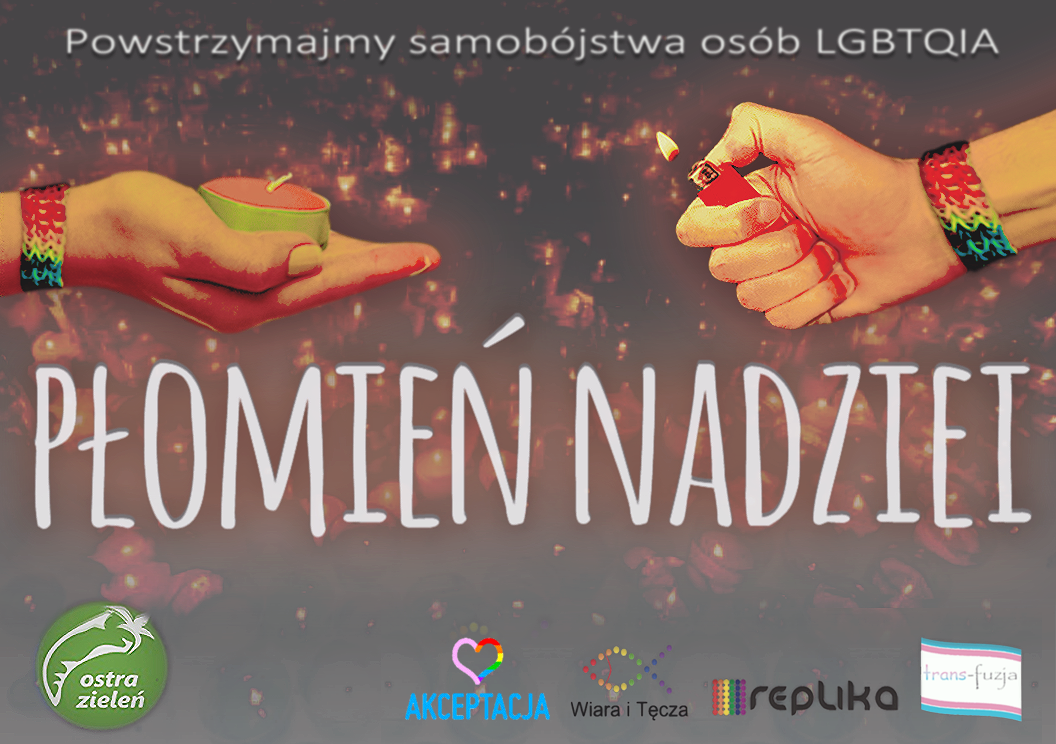 On the 15th of April 2015 Polish Young Greens Ostra Zieleń organised an action in order to commemorate young people from LGBTQIA community who committed suicide because of hate and the lack of understanding coming from their environment. Read our interview with one of the activists from Poznan, Poland Patryk Sierpowski, who explains the situation in Poland.

Ecosprinter: What is the action the Flame of Hope (in Polish: Płomień nadziei) about and why did Polish Young Greens organize it?

Patryk Sierpowski: The Flame of Hope is an action on the national level, which aims to draw society’s attention to suicides of LGBTQIA people, who took their own life because of homo-, bi-, trans- or queerphobic hate. It is important to honour them and give a hope to all people, that can’t see possibility to improvement. For Polish Young Greens Ostra Zieleń issues of LGBTQIA community are very important. We think that all people are equal and should not suffer from discrimination regardless of their sexual orientation or gender identity. Remembering the third anniversary of Kenneth Weishuhn’s death we want to light up The Flame of Hope to show that all those tragedies are significant for us and we must stand up against hate, which causes these situations.

E: Are suicides caused by discrimination and rejection a widespread phenomenon among LGBTQIA community in Poland?

PS: We can only assume, based on the stories from the USA where these cases are not confidential, that they really are. We only had one research made in Poland. The conclusions are that 63% of LGB teenagers have suicidal thoughts (in the heterosexual group it was 12%). These suicides are mainly caused by the lack hope. And this is a big problem. We must notice that all is changing. Maybe this process isn’t as fast as we’d like it to be, but it is happening. Sometimes, when today’s reality and its unpleasantness overwhelm us, we just might disregard this good thought.

E: What are the main problems of the LGBTQIA community in Poland?

PS: It’s so hard to answer, because I could list lots of things. The most important thing, that influences the unsatisfactory situation of LGBTQIA in Poland, is the oppression by the heteronormativity. We live in a country where Catholic Church has a lot of impact and defends patriarchy. It excludes people, that don’t suit their image of the binary social roles from public life (for sure, we have also exceptions, like Anna Grodzka, first Polish parliamentarian, who has transgender past). Since childhood society tell us, how we must be and who we must love. If someone with their „rainbow” demolishes a wall of heteromatrix, they can face lots of hate around. The result is that lots of LGBTQIA people don’t come out, hide their sexual orientation or gender identity. The frustration often makes the suicide decision easier. They are in blind alley, they don’t see any chances for change and because of this they have nothing to lose. In church they hear, that they’re deviants, teachers often ignore homophobia in schools, words like „fag” or „homo” are their reality. With the Flame of Hope we want to show, that we are never alone and it always can get better.

E: Considering the current political situation in Poland, do you think the situation will get better soon?

PS: Polish political situation is now so hard, especially for left-wing, which is almost alone in the fight for Equality. Right-wing parties, that hide behind God and act against human rights, are more and more popular. Society sees that state of country gets worse and some people choose extreme right option. But despite radicalisation of the conservatives, we can see a big change. Anna Grodzka has a seat in the Polish parliament, Robert Biedroń is the first openly gay mayor and politicians discuss civil partnership for every couple – even this debate regardless of their opinion, is important because people can see that people like gays, lesbians, transgender etc. live in the same world as all those heterosexual and cisgender people. We are one family, we are humans and this fact should lead us to the future, when every person will be equal and will be what they want to be. On one of the Cyndi Lauper fan pages we read – We need all our kids. Please get involved and teach to them the different is OK – hate is not. It’s time we stand up as parents, as people, as a nation. And get involved. And give a damn. I give a damn. You should too.

Light up the Flame of Hope with Polish Young Greens Ostra Zieleń for all those, who committed suicide, because of the hatred of society. On 15th April, the third anniversary of the death of Kenneth Weishuhn, at 19:00 in many cities of Poland we lay the flowers, candles, rainbow flags, etc., to draw public attention to the problem of taking their own lives by LGBTQIA people and give them the hope for a better tomorrow. Join us and organise the Flame of Hope in your towns! You can post your pictures on our FB page https://www.facebook.com/events/1380100018981923/.