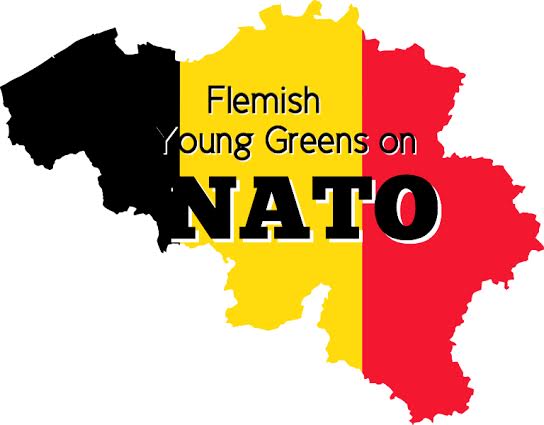 Now we go to Belgium to look at the Flemish Young Greens’ position. These answers come from Jan Keustermans, their international secretary. In a small country that was one of the founding members, the story of Belgium and NATO is long and complex. So it may come as no surprise that the Flemish Young Greens have a firm stance on the matter and is highly critical of the organization.

Do the Belgian Young Greens have an official position on NATO?

Jong Groen’s (the Flemish Young Greens) position on NATO is an integral part of our broader vision on international security in the actual global context.

Jong Groen doesn’t believe any more in the defensive pact that is NATO. This organization is a relic of the Cold War, but the actual international context makes its original goal obsolete. What we see today, is an aggressive transatlantic military alliance that doesn’t resemble at all the spirit of the post-World War Treaty. Moreover, we have doubts about the American military ideology that dominates the organization.

Jong Groen therefore pleads for a European defence policy – integrated in the European Union foreign policy – centred on humanitarian aid and durable development cooperation. An EU defence policy can be a strong alternative to the American, Russian and Chinese military doctrine. The European Parliament must however be able to exercise a strong democratic control on this foreign policy. They must be able to withhold, change and end any military mission.

This vision on international defensive policy is determined together with écolo j (our French speaking sister organisation in Belgium) in 2007. During our annual weekend together, we wrote a common manifesto on the future of the EU. Apart from the European defence policy, we took a common stance on EU democratic renewal and environmental policy.

How do you deal with this perspective given the Belgian history?

Belgium, a small country that was mostly occupied during both World Wars, was one of the founding members of the NATO. After the war, the Belgians were very active in international cooperation in order to guarantee the peace in Europe. With the outbreak of the Cold War, we wanted a security system to protect us from the powerful, dictatorial Soviet Union under Stalin. However, after the Wall fell down in 1989 and the USSR imploded two years later, Belgium stayed a member of NATO, even though the threat from Moscow had disappeared. Because of that, we have still nuclear bombs from the Cold War on our territory. Those are not only a risk because of their dangerous content, but also because it might provoke other countries.

When the USA and Britain invaded Iraq, Belgium (with the Greens in the coalition) refused together with France and Germany to join. That invasion proved in our eyes the aggressive military policy of the United States, which is not focused on human welfare, but on geo-political interests.

Belgium has been a neutral country for most of its history. After the Second World War, we chose for a positive and strong international cooperation to guarantee and improve the peace within Europe and the world. We suffered too much from the Second World War to allow any new war. Since NATO has become an aggressive organisation, we, as Belgian Young Greens, can’t support it anymore. For Belgium, the European Union has become the primary cooperation within Europe, guaranteeing our peace. Therefore, we think military cooperation should be coordinated by the Union. However, our latest minister of defence, a Christian-democrat, was very much in favour of NATO and had quite some personal ambitions within the organisation.

Although we decided on this position completely independently, the vision of the Greens and the Young Greens are very similar. We, the Young Greens, have a lot of influence on our mother party Groen.

In what ways do you think that the Greens have/will affected the debate on NATO in Belgium?

Currently, there are few major debates on NATO in (Dutch-speaking) Belgium. When the Greens were in government (1999-2003), they influenced the debate strongly as Belgium chose not to join the invasion in Iraq. These days, they mostly influence the debate inside the parliament.

Has the Belgian perspective on NATO have changed in the past couple of years?

The majority of Belgians had a rather negative perspective on the USA and NATO at the time of the Iraq-crisis. During the decade, many Belgians slowly become positive again towards NATO and the USA. A lot of them however keep a critical stance.

A lot of Belgians feel that we are too small to act in the Ukraine-crisis. However, the already low sympathy for Putin’s Russia declined even more. Some Belgians are afraid of a new powerful threat from Moscow and many of them look to Washington and the NATO to protect us. Especially after the crash of the Malaysian airplane with a couple of Belgians and a lot of Dutch on board, marked an increased concern about Ukraine. The probable new coalition government wants to invest more in the military and to be “a better NATO-partner”.
This is a negative evolution. Jong Groen hates to see the Cold War discourse resurface. This will never lead to a durable solution of international conflicts as the one in Ukraine. Russian nationalism – which is used by Putin to reinforce its power base – will only be strengthened by the toughening of European military discourse. These politics of the conservative Belgian parties will thus work only counterproductively.