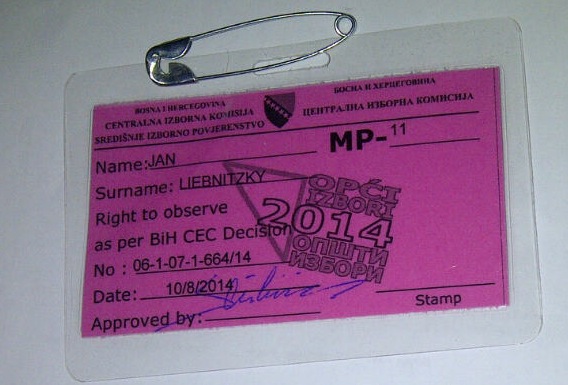 On 12th of October 2014 there were general elections in Bosnia and Hercegovina. The war-torn ethnically divided country has one of the most complicated political and electoral systems in the world – These are the reflections of an international election observer.

It is 7 o’clock early morning and unexpectedly chilly. The walls are decorated with handcrafted Eiffel Towers and a poster explaining traffic signs. The first voter of the day spends solid eight minutes behind the white board of paper. We, instead, have aleady been sitting for an hour on these small chairs in a class room of a primary school in Sarajevo. We are Marije from the Netherlands and Jan from Germany part of AEGEE Europe. On our jacket dangles a pink welded plastic card proving that we are accredited for an election observation mission in Bosnia and Hercegovina. At this untimely hour we observe the counting of empty ballots into packages of 25, toss the ballot box to see if it is truly empty, test if it is properly sealed and marked in the polling station log book.

On 12th of October 2014 there have been general elections in Bosnia and Hercegovina. It was clear from the beginning that there will not be huge changes in its political landscape. “I will go vote, but nothing will happen anyway”, comments a passer-by on the event. Many here people agree on that. In the beginning of the year, however, one would have expected things to be different: In many cities of the Federation of Bosnia and Hercegovina occurred violent anti-government street protests against corrupt political elites and misgovernment.  Many leading politicians resigned and a citizen plenum was established for instance in Sarajevo. But, a proper party did not result from that process.

Meantime, already ten voters made their crosses and inserted the ballots one by one into the box. Stuffing is prohibited because a ballot could find its way outside the polling station and Carousel Voting might occur: The “voter” receives a pre-marked ballot outside the polling station inserting it into the voting box and instead brings an empty ballot outside. This procedure may happen for every voter who wants to sell his voice. Allegedly, in rural Bosnia votes are bought for 25EUR.

A further problem might occur during ballot counting in the evening. Observers ought to keep attention that ballots are not made invalid or votes added to the paper. Major irregularities, however, were not reported by any of our teams, neither in the countryside in Binjezevo and Hadzici nor in the city of Sarajevo.

Many political parties in Bosnia and Herzegovina are organised along ethnic boundaries. The presidency is shared by rotation every eight months among a Croat, a Serb and a Bosniak. This ethnical proportion system which exists for other political institutions, too, sustain the country’s political deadlock, for instance with regard to the implementation of human rights. The last European Progress Report 2013 states that Jews and Roma are still not allowed to run for important political posts such as the presidency.

The ruling elite will persist also after the elections, because too many people profit from the status quo.  Bosnia and Herzegovina has 40% of non-working population and a huge public sector comprising hundreds of ministries. When the state is the biggest employer, every vote for a new non-conformist party could cost your own job or the one of a relative.

Stefan works in the polling station in Garovci and lived in Bavaria, Germany during the war. In perfect German he tells us that all polling canvassers and domestic observers are affiliated with different political parties. The domestic observers are surprisingly young and cross check all voters with their own list. In case a party member did not show up until the afternoon, he or she would be called and reminded to go voting. Every vote counts.

The doors are shut in time at 7 o’clock pm. Nobody must leave or enter the polling station from now on until all ballots are counted. In total we are 20 people with this common destiny: four international observers, 12 domestic observers from the different parties and ten polling station officials. Tables are pushed together, cracks taped, pens put far away and wedding rings taken off – as a proof, hands are stretched into the air. Counting procedure can start now. The first drama happens when one ballot is missing after the first count. Do the polling station officials have to recount everything now? A huge relief is sensed when the ballot appeared. The next hours until early morning, the work goes on monotonously: Counting. Keeping calm and concentrated. Keep counting. When an invalid ballot with an extra mark for Vladimir Putin appeared, sprits rose. Then counting again.

For further information about the election in Bosnia and Hercegovina can be found at OSCE and AEGEE Europe. The article was first published by d_part.