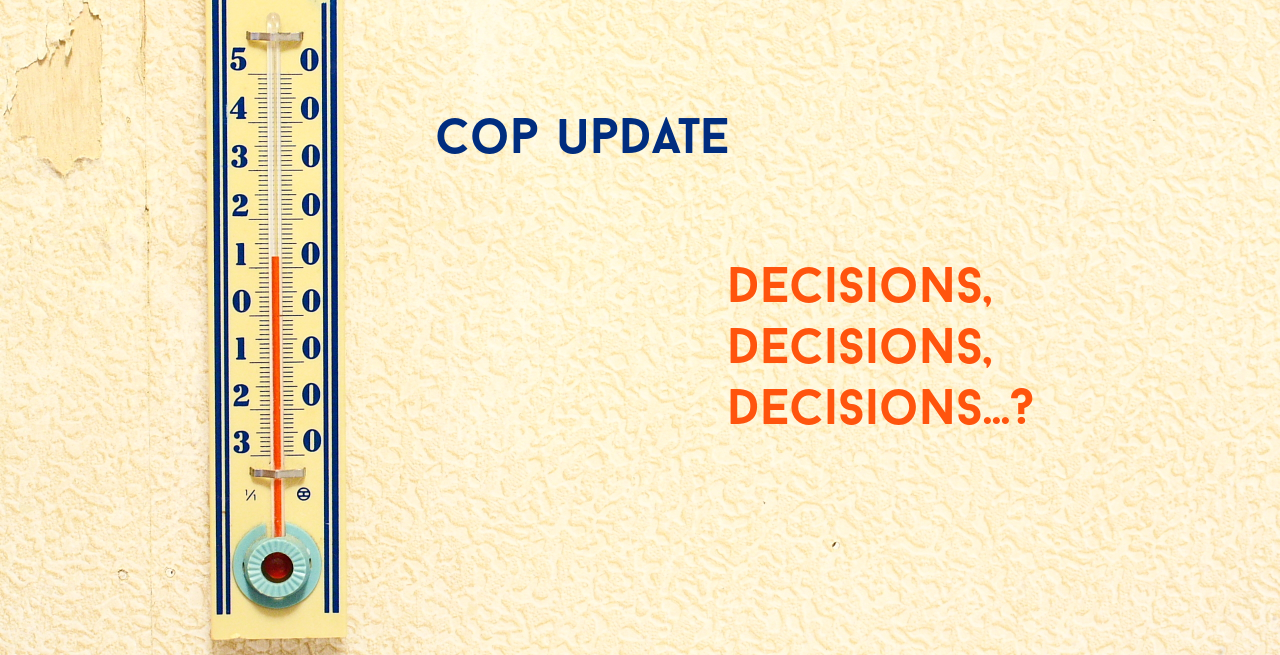 Yesterday, there was a new historical moment for the on-going climate negotiations: We finally have a draft agreement!

This new text saw a reduction from 21 to 14 pages, and we have a broad overview of what is in the draft and what isn’t.

Firstly, the text still has the form that would be needed to make the agreement legally binding. Yet, several issues have been moved to the so-called “decision”, which would not be legally binding. The introduction to the text, the preamble still mentions a broad range of rights but only in brackets and the rights of people under occupation do not appear anymore at all.

In Article 2- the purpose of the agreement, to decide on an increase in temperature limit – there are several options. There are many references of the temperature goal but it is still not clear if it will either be 2°C or 1,5°C. Human rights are still mentioned, which is very positive although gender equality has been deleted from the text.

Regarding the long-term goal, the discussions were also trimmed down. There are now two options in the text, one is a quantitative long-term goal with emission reduction targets. This would also contain a base year, which means the year the emission reduction targets are compared to. In the past this has been 1990, the new draft says 2010 – this will implicitly reduce the mitigation ambition because emissions were already lower in 2010 than in 1990. The second option is a qualitative option with decarbonisation, which would generally reduce greenhouse gas emissions versus climate neutrality, which would allow for greenhouse gas emissions as long as they are negated somehow (through natural and technological means).

Unfortunately, the mechanism to ratchet-up the ambition of countries is not really in the new text. This mechanism would be a central part for an agreement if it should enable long-term ambition.

Under Adaptation and Loss and Damage, the option to ensure the difference between them by placing them in different articles, is still on the table. Also, the anti-liability clause of the US has not made it into the new text. However, negotiations between the US and the Association of Small Island States are still underway, which could jeopardise how liability appears in the text. On the other hand, a facility for climate change displacement has made it into the text, which is very positive.

International transport, shipping, and aviation has not made it into the text – leaving the 1,5°C effectively with less substance. The INDCs are not legally binding anymore, therefore a system for compliance has also been deleted.

Differentiation, finance, and ambition are still three major issues that remain unsolved throughout the whole text.

Moreover, the text also had some copy and paste mistakes, leading to a lot of caution among the observers. Due to these errors intergenerational equity was deleted and finance for Loss and Damage suddenly appeared- both were a mistake.

In other news, John Kerry stumbled about the 1,5° goal:  “The targets we have set together are not enough for limiting global warming to 2 degrees, Celsius… which is what science is telling us to prevent the worst impacts of climate change or lower than that if possible, 1,5°C. We need to go as low as possible, as many people in this hallway are demanding”

A “coalition for high ambition“ was also formed. It is made up of the US, the EU, Africa, some Island States and many more countries such as the Gambia, Mexico, Norway and the Marshall Islands. It is not a new negotiating bloc, more a loose connection of countries. In a press conference, the Marshall Islands said that they would not accept a minimalist agreement or bare bones. They call for an ambition mechanism, a formal recognition of the 1.5°C goal, five years cycles for national climate action plans, strong support and they announced that they will not trade off one of these against another.

Where are we going? In the afternoon there will be new text, so let’s see then!