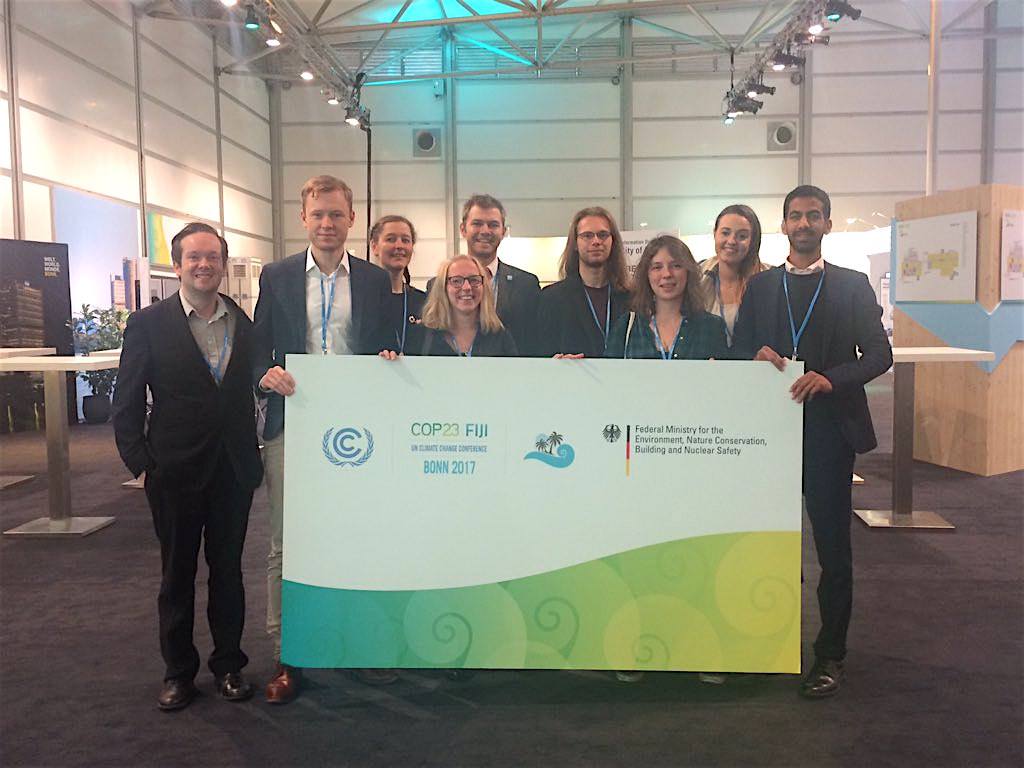 The United Nations Framework Convention on Climate Change was the international political response to climate change, founded in Rio, 1992. A party is any government that has ratified the convention, of which there are over 190. This includes all developed and almost all developing nations. The Conference of the Parties, known as COP, is where nations meet once a year to deliberate progress. This is a report of the FYEG delegation of this year.

The first COP took place in Berlin, in 1995 but the first most momentous COP was COP3, at Kyoto, where the first ever international agreement to cut greenhouse gas emissions was made. Recently we celebrated its 20th anniversary, on 11th December 2017.

COP6 was fruitful with regard to agreements on flexible mechanisms, carbon sinks, compliance, and financing. COP8, Delhi, was the first COP where it was agreed that developed nations would transfer technology to developing nations and minimise the impact of climate change on them.

At COP11, in Montreal, the Kyoto Protocol entered into force, and the clean development mechanism, CDM, a key component of it was initiated here. At COP15 in Copenhagen, developed countries pledged upto 30bn dollars to fast track climate finance. Consequently at COP 16 in Cancun, the Cancun agreements (the most comprehensive package developed to aid developing countries) and the Green climate fund, were established.

At COP21, the historic paris agreement was decided upon. 195 countries agreed to come together, to take tangible steps to not only limit global warming, but to build resilience as well. This agreement, takes into consideration all nations responsibilities and situations, and asks for actions leading to the avoidance of temperature rise of 2’C. It does so by having countries work through NDCs ( nationally determined contributions). It also incorporates, financial aid, technological assistance, and capacity building networks so nations can help each other achieve these NDC’s.

The Paris agreement is widely supported, Nicaragua and Syria being the latest countries pledging ratification. Nicaragua had felt that the deal was not sufficiently ambitious, but pledged ratification nonetheless and recently, Syria joined in, leaving the US the sole party that has intentions to withdraw from the agreement. Since the Paris agreement, negotiations have been centered around the practical steps to make sure Paris is not just achieved, but also met with a greater target of limiting warming to 1.5’C!

What happened in Bonn

This year’s climate conference, the COP23 that took place in Bonn stood out for one reason: it was the first climate conference under the presidency of an island nation, more precisely Fiji. Fiji is one of the states that will simply disappear as a result of the climate crisis.

This COP was the penultimate meeting of parties before the guidelines of the Paris Climate Agreement will be discussed. For this reason, this climate conference was a “technical” climate negotiation. No big decisions like in Paris or Copenhagen were on the agenda – it was about how the declarations of intent of the Paris Agreement can be translated into a working set of rules.

The results of the conference were the smallest possible steps. Climate change discussions progressed steadily, with few flashpoints, but without the speed we need to see. This means, as in the years before, the climate negotiations proved tough and attracted criticism for not being ambitious, or anything close to it. But they do have legitimacy in international decision-making processes and must therefore not be left to actors such as the fossil industry. Or, as one indigenous activist put it, “If you’re not sitting at the dinner table, then you’re on the menu!”

In COP23, climate action before 2020 formed a conflict between developed and developing countries. Developing countries asked developed countries for a clear discussion about their climate action prior to year 2020, as Paris Agreement applies to mitigation targets after 2020. In next phases, parties will submit information on how to add to mitigation efforts before 2020. Unfortunately, the developed countries did not allow pre 2020 action to become a separate agenda item. Nevertheless, parties agreed upon having additional stocktaking sessions in 2018 and 2019 to review mitigation efforts.

One of the major issues for this COP was the physical layout of the conference. There were two zones – the Bula zone, where the negotiations and meetings took place, and the Bonn zone, which featured all of the country pavilions and side events. While lots of observers were able to access the Bula zone, many of our colleagues were denied. In one of the working groups of young representatives, only two out of the ten active members were able to attend the zone where the negotiations were occurring. According to the organisers, it was designed to “manage the level of participation and events in an inclusive manner”. However, it also served to limit access to the areas where the negotiations were taking place, especially for civil society. There are often concerns that the UNFCCC process is opaque and difficult for groups to engage with – it seemed to us that this was yet another barrier erected to prevent civil society from performing the vital job of observing the talks.

COP23 was the first climate negotiations summit that took place after Donald Trump’s announcement that the USA would withdraw from the Paris Agreement. On day two at COP, Syria announced that it would sign the Paris Agreement, leaving USA to be the only country in the world outside of the Agreement. The US also did not join Powering Past Coal Alliance, which was launched during the COP23 to accelerate the countries. The French slogan “#makeourplanetgreatagain” and the climate summit where the US was not even invited to organised by France shortly after COP23 accentuated the isolated position of the US with respect to climate change.

Still, it is important to note that besides the small delegation of USA, an alternative “We Are Still In” delegation joined COP23 with its own pavilion. See America’s Pledge Report here.

The Gender Action Plan (GAP) is the latest achievement concerning gender since the Lima Work Programme on Gender (LWPG) agreed upon during COP20 in Lima. The aim of the Gender Action Plan is to bring gender mainstreaming into all parts of the Framework Convention on Climate Change. This means that all areas discussed at the Climate Change Conference should now also be checked to see if they are gender-sensitive. Since the climate crisis has a differing impact on female, inter and trans people compared to men and the existing injustices of the patriarchy will be aggravated because of the climate crisis, it was important to adopt this action plan. In the first week, pressure was once again put on the negotiators. For example, meetings with the German and Norwegian negotiators of the GAP took place and our young feminist perspectives (youth NGOs) were given to them. In addition, two small actions were held in front of the negotiation rooms to draw attention to the need to act on this.

COP23 gained the nickname ‘Ocean COP’ because of Fiji´s presidency. Presence of small island states of the Pacific Ocean brought new urgency to atmosphere of COP but many had higher hopes regarding what this COP would deliver to preserving oceans. In COP23, the Ocean Pathway Partnership was launched under Fiji’s initiative. This partnership calls all states to include protection of oceans in their NDC´s by 2020, something that only few countries have done so far. Oceans are still neglected in the UNFCCC processes and there is no agenda item on oceans. As representative of Cook Islands said in OPP´s launch: “Let us not wait until partnership starts to work”. Only time will tell whether COP´s that are not under the presidency of small island states will be able to address the issue.

COP23 was the first climate summit in a long time, in which we saw real progress in the field of agriculture. The role of agriculture in mitigation and adaptation is indisputable and NGO’s have often emphasized that to address food security, agriculture needs to have a clear position in the negotiation agenda. During COP23, the parties agreed on founding a working group between SBI and SBSTA. This group will address issues related to agriculture in the future. Over the coming years, agriculture’s link to climate change will be studied, and in 2018, countries will give input on several issues, such as how to improve soil carbon sinks and fertility and climate friendlier livestock management within the negotiation process. This step may not seem enormous, but after years of deadlock in agriculture talks, the reached consensus is a first breakthrough.

This article is written by Niina Ratilainen, Liesbeth Mensah, Anna Peters, Tariq Khan and Kenneth Green. Read more about the advise of this year’s delegation for COP24 tomorrow!