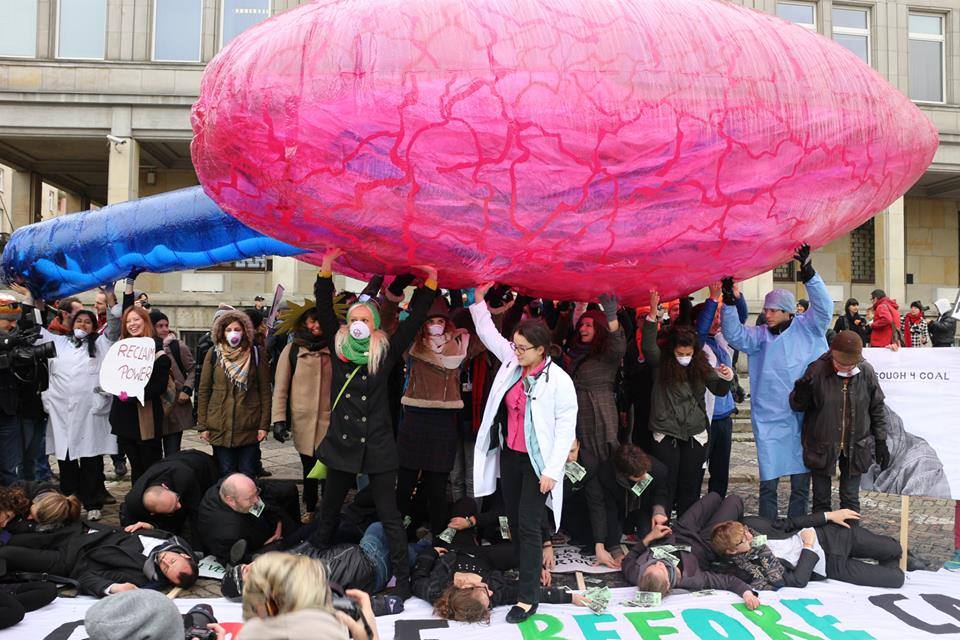 The second week of COP19 in Warsaw has begun. The government of Poland has also invited the coal industry to a have a summit parallel to the UNFCCC climate summit. It has been seen as a slap to the face by several parties and NGOs from the Polish presidency.

Today there has been several actions around the Coal Summit. FYEG participated in the “Coal before People!” action with 7-meters-wide inflatable lungs. The message of the action was that there are also severe health effects associated with the use of coal. Micro particles can affect the respiratory system as well as cause heart problems and asthma. There were several speakers from global south and public health organizations.

New members of the delegation

This weekend, two new members of the delegation arrived in Warsaw.

Lorentz is 24 years old and spokesperson for the Young Greens of Sweden. He’s going to look into the  finance issues during this second week of the COP. Follow him on twitter: @LorentzTovatt

Clarence is 29 years old and is from Switzerland. She will follow the adaptation topic and track discussions on intergenerational equity as Shenna is now busy with organising the FYEG COP 19 Climate Workshop which will start tomorrow. Follow her on twitter: @ClarenceChollet

Both are really excited to join the delegation and were busy today catching up on what happened last week.

Today the G77 put forward a proposal for increased funding in the coming years. The proposal says that the rich countries should pay at least $70 billion until 2016. This should then be scaled up to be at the level of $ 100 billion per year by 2020. The idea is that there should be a clear balance between the funding that goes to adaptation and the one that goes to mitigation actions. Unfortunately, Australia has already opposed the proposal.

Late this evening there was a plenary about the Ad Hoc Working Group on the Durban Action Plan where the finance where discussed. Many countries, among them EU, argued that we need more concrete pledges on finance.

On Wednesday there is a big ministerial meeting on finance. Hopefully we get something positive from it.

No updates since Saturday. The chairs seem to still be working on a compromised text. This will involve the lead negotiators. On the youth side, we are preparing our own action which will be aimed at isolating Australia which doesn’t even want to talk about loss & damage (as supposed to others talking about institutional arrangements) in order to deter other developed countries to join their side. We want to attract media coverage to do so which is not easy with limited time and limited props… We are also in conversation with CAN who want to do a joint action on loss & damage.

Greens from all around the World are present at the COP19. Today, the FYEG delegation had the opportunity to meet some of them: MEPs, delegates from different countries, representative of Global Greens. It was nice to feel part of the big Green family!

Looking forward to give you more news tomorrow!