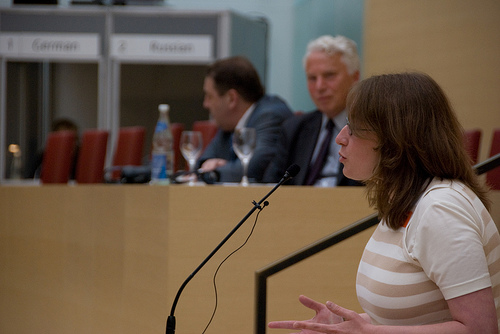 At least since the UN Convention on the Rights of the Child signed in 1989 children should have the guarantee of protection, provision and participation. Guaranteed protection and provision have been met in many industrial states. Youth Participation, however, as an overhead for the right to participate, has not been carried out properly. Especially, it is very complicated for the young people to be involved and to get in a powerful decision-making position. Many scientists think that the possibilities of real participation will diminish, if we do not act now. The reason is the demographic change; the society will grow older and with the ageing process the parliaments might also grow out of reach of young people. To not let this happen, the idea of the Youth Parliament was discovered.

One way to let young people participate is to let them join Youth Forums and Round Tables managed by the City Council or the Local Administration (passive). They get help and money to realize their plans. In exchange, often Young Activists from different groups commit themselves to specific issues and educate other youngsters on diverse topics. This is a way to empower youth organizations of political parties or youth societies of bigger NGOs like Greenpeace or Attac. It is also a way to improve their impact on politics. Though, as you can see, it is not a good way to integrate not yet active youngsters. Children rights enforcement and aid to enable young people to participate is crucial. Further, lowering the voting age, subsidizing youth projects (e.g. Erasmus Exchanges) or the enactment of Youth Ministries do act as a foundation for participation. Yet, to complete the participation of the young generation we need beside the passive integration an active way to participate. Youth Parliaments opened up the chance to do this. Stemming out of the idea of a simulated City Council, there was given an opportunity to write amendments and direct them towards decision makers. Even though the “involvement” is the keyword of the Youth Parliament, you will see how wrong it can go. In the translated essay written by Johannes West you can see how difficult it is to do the right thing (and do it right). To understand how the author of the essay meant it, you will still need to know some general information about a Youth Parliament. And of course there are also some really good examples of Youth Parliaments which should give young people a push to try it themselves.

Work of a Youth Parliament

The work of a Youth Parliament can be found mainly on a local or regional level. One could question why, but the reasons are rather technical so let´s go on. It is voted by young people between 14 and 21 years old. There are more ways of how to organize it; either as a system represented by different schools of a municipality or (more favourable) as an organization with its own budget and rights. These rights could consist of authority to send delegates to committees of real Parliament or City Council. The right to adopt a formal position to everything the City Council or Administration communicates or does should be always integrated. The frequent problem is that this requires a great amount of willingness to share power by the people who are now in charge.

In conclusion, there are many ways to make the youth participation more possible: both active and passive. The fight against disillusionment with politics, the aid for more participation of rebellious youth and the enforcement of their interests lead to better future. This is something everyone knows: as much as children are the future, the future is the children.