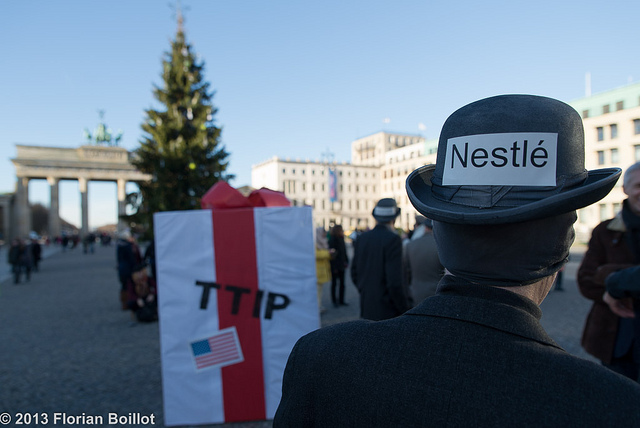 Some time ago, I read an article online that was introducing the Transatlantic Trade and Investment Partnership. It was written in an optimistic and serene style, describing all the advantages, like job creation, increase in trade and deeper interconnection between two most important economies, abolition of many quotas and duties, etc. However, despite the enthusiastic tone of the article, my feeling was rather anxious than serene as the real face of TTIP looks a bit differently. Let´s have a closer look at it.

To understand better what a free trade between these two big blocks would really bring, the publication A Brave New Transatlantic Partnership, written by Kim Bizzari (S2B), will do us a good turn. The paper brings us results of a preliminary analysis of the partnership, unbiased and not misleading as many political proclamations. In following paragraphs, I will summarize the content of this analysis.

First of all, it points out that the estimation of 1% increase in GDP growth, which the common trade would bring, is quite exaggerated. Even the impact assessment by European Commission shows that the more realistic growth rate is rather 0,01% of GDP over a ten-year period. The job creation is also just an illusion, as open competition and reconstruction of sectors would not guarantee the relocation of jobs, but rather it would left many on margins and would contribute to inequality among the EU members. The assessments that prove contrary are based on speculative mathematical and economic models and the one should be aware of communicating such information. As US has not ratified essential legislative that secures workers´ rights codified by International Labour Organization, the TTIP could lead to deterioration of labour standards in EU and constraints in freedom of workers´ organizations, unions and associations.

This insignificant increase in GDP would have, however, significant impact on environment. It would lead to increase pollution, resource depletion, undermining of EU environmental standards. There is already a strong lobby by US companies to minimize the environmental legislative obstacles in Europe. The harmonization of environmental and other rules would open doors to many unsafe practices in food and health sector, production and labelling-free use of GMOs or defective practices in energy sector, like fracking; and these would obviously undermine health and safety of people and environment.

Inclusion of public procurement chapter would shatter nationals´ sovereignty and would shift it into the hands of profit interests of international corporations. It would practically obstruct the creation of alternatives and local sustainable solutions and economic models to international free trade rules. In this way, the taxes paid by citizens could flow to the foreigners´ pockets, and citizens’ and states’ rights would not be legitimated against the corporations and investors interests.

The intellectual property rights system is very sensitive as we can remember what indignation has been brought by ACTA or by interception scandals. But corporations and big businesses do not give up; some points of ACTA are already successfully implemented in CETA- Comprehensive Economic and Trade Agreement- an analogical agreement between EU and Canada. If the IPR were a part of the treaty, the Internet would be turn into the “private surveillance tool of big business” and any personal information would be shared freely across the ocean.

The TTIP aims to liberalise all services; however, as we can see what a deregulation has created form the current financial and banking system, we can easily understand that further liberalization would not just lead to another crises, moreover, would lead to uncontrollable financial hazards, destruction of real economy and exploitation of citizens´.

At the conclusion, the paper reflects the treaty as an elite project to reverse social policies and move towards global liberal economic order.

Well, this research explicitly shows threats of liberalisation of transatlantic trade. There are strong corporate and lobbying interests that are trying their best to make the Treaty come truth. We can say that the akin and yet successful negotiations of free trade between Canada and EU serve as a bridge to successful TTIP. The EU and North America are crucial actors in global economy, and as well global policy. Such agreement would deeper global development differences and the North would obtain much greater geopolitical power and even stronger vote on any global negotiations.

There is a huge potential in cooperation among continents, and I think that the cooperation is inevitable to sustain the living conditions and secure the vital future. However, I am asking why the cooperation possibilities are being so misused and instead of looking for solutions of common good there are still persistent rivalry, deprived interests, fear and greed? Instead of creating just global rules that would enable all to live solid life, the centralization and exploitation games seem to hold over. The EU´s Yes on the treaty would implicitly show its submission to US political and economic philosophy. One can think that EU could preserve its ´balancer´ position by signing a suchlike treaty with China, but such step is just making the EU open battlefield, the place that would be robbed out. The TTIP would act as a contra-block to BRICS development and their rising power, and rather than creating multipolar peaceful co-existence, we would continue in fight for delusional prestige.

I am curious how the treaty negotiations will develop. The fourth round of negotiations will be held in Brussels on 10-14 March 2014. If we consider the democratic possibilities and we imagine the strong citizens´ lobby to protect the citizens´ rights, the proper and not misleading information and awareness, the European Citizens´ Initiative for referendum of such a treaty or for accommodation of legal aspects of the treaty, it would be possible to avoid the future manipulation by malicious interests. However, how much power and willingness is there still left to fight, how strong can be the citizens´ lobby against the financial and corruption power of big business, how strong are we to resist and distinguish the truth from the illusion? Do we allow the others to oversize a control over ourselves?