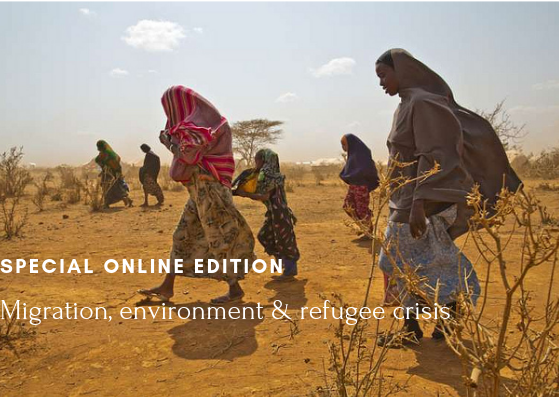 Refugees coming to Europe is nothing new. However, things escalated in 2015 when according to Eurostat, 1 321 560 people entered Europe, mainly because of war in Syria. Once in Europe refugees have to wait for asylum approval that may be declined, but even if accepted, it takes time to get it. Sometimes they wait a lot, sometimes less, but during that time, they are staying in camps.

As it is well known, refugee camps are a very controversial topic, as the refugee crisis is in general. On the one hand, there are people that want to open borders and think that it is inhumane to keep people that hope to live in peace and prosperity in a camp. On the other hand, they are people that don’t want immigrants, as they consider them as  a threat to security, and imagine that they won’t integrate in society and that camps are a big waste of money. Given these circumstances, it seems it would be even worse if the whole thing was putted in the context of raising ecological problems and the emergence of ecological trends and progress. Still, proper care for environment should impact every aspect of politics and society, including refugee camps. So, how could that be managed? We will explore the example of Croatia where my sources are coming from.

“I’m not sure that there is a law to regulate ecology standards in refugee camps“, believes Lea Horvat. “I wouldn’t know how to answer you on this question. Certainly, people were making sure to keep up hygiene standards, but regarding ecology, you should ask someone that managed the camp. I guess camp had to follow general ecology standards regulated by Republic of Croatia“, replied Sara Kekuš. Both Horvat and Kekuš were there for asylum seekers when the crisis began.

Horvat cooperated in transit camp Opatovac in Croatia with society for psychological care giving psychological aid to both refugees and camp volunteers. She explained that due to such a critical situation –  transit of big number of people, securing food, health, registration and human rights – ecology wasn’t concerned farther than from making sure that the trash doesn’t pile up. She estimates that there were 300 people employed for cleaning duties, but both volunteers and asylum seekers helped them out.

“There were series of situations when you could’ve seen refugees taking initiative asking for gloves and bags to collect trash and help people that were in charge of it“, said Horvat, adding that she found data saying that 300 cubic of trash was taken out of the camp in a month and a half.

Kekuš worked in winter transit camp in Slavonski Brod, which was opened from November 2015, until April 2016. People there were mostly staying for only couple of hours. Refugees were traveling to camp by train. “The camp was clean, because people were cleaning after each train had passed. Because of large number of people, hygiene had to be the priority so there won’t be infection outbreak“, said Kekuš, stating that “it is hard to expect from a country that usually doesn’t care too much about ecology, to do so in such a difficult situation“. She also worked on the field between Croatian border and Opatovac camp, and confirmed Horvat’s story. “Very often that area was filled with garbage and when volunteers would go cleaning, refugees would often go and help them“, said Kekuš.

Yet, both Horvat and Kekuš agree that it’s impossible to generally speak about refugee’s interests in ecology. Just like in any other group of people, different people have different interests.  Along with health, camp cared for garbage cleaning, but what about recycling?

“Camp had a container for paper where people really were disposing paper and cardboard. Deposit fee plastic bottles were mostly separated but plastic cups were thrown in mixed waste“, remembers Kekuš. Horvat found troubling that people were given too much bread that wasn’t used, as well as clothes that asylum seekers couldn’t take with them because the conditions of their journey made it too difficult. “What I remember as problematic and completely illogical was dumping large amounts of blankets that people were leaving behind, when they could’ve been washed and reused“, concluded Horvat.

Sort waste or make less? Why not both

Given all this informations, basic conclusion would be that recycling could’ve been done better. Different cans for different waste are appearing in all cities in Europe more and more and Croatia is no exception. Better food and supplies management is something that has always been a problem in developed countries. But, answer to both of those questions could be found in more and more emerging lifestyle called zero waste (ZW), characterised by reusing everything as much as possible before throwing it away.

Anamarija Prgomet is publicly the most well known zero waste promoter in Croatia. She admits that ZW takes some commodity out of life, but benefits for the environment are huge.  “The movement got pretty large (3500 virtual members) and it caught media attention, I’m developing projects that will bring more to inspire people to turn towards sustainable lifestyle and we are cooperating with various organisations from Croatia and neighboring countries“, said Prgomet that also holds lectures and workshops across Croatia. She adds that zero waste also secured her  financial savings. “I don’t buy half the things I used to buy. I had to invest some money at first in long term things such as a razor, but comparing it to buying plastic razor per month or a year, savings are guaranteed“, said Prgomet pointing out that it is cheaper to buy products in ZW stores without wrapping.

Still, what is the possibility of zero waste being implemented in a refugee camp? Prgomet states she didn’t tried to bring ZW to refugee camps, but she did contact Are you Syrious (AYS), an organisation supporting and helping asylum seekers. “I suggested AYS to educate refugees about how to make natural detergents and cosmetics, but they replied that they urgently needed donations of detergents and cosmetic and were not able to educate about making natural products“, Said Prgomet. She concludes that she should approach this topic more seriously and systematically, but is currently occupied with other projects. Still, Prgomet administrates the facebook page “Sharing is caring“ where she encourages people to donate natural cosmetics and cleaning products to refugees.

Solar would be cheaper

After contacting Croatian office for rescuing, it seemed that Opatovac camp was old fashioned regarding its energy sources. As they confirmed, not a single solar panel was used for electricity. Cost of electrical connection was 213.139,35 kunas (one euro = 7.42 kunas), while the cost of the electrical usage was 96 000 kunas. “Several gas bottles took 1217, 50 kunas“, they said from the rescuing office.

Neven Duić is a professor at Faculty of mechanical engineering and naval architecture in Zagreb, and his research is focused on independent energy sufficiency, where solar panels have a big role.

“Solar panels are by far the cheapest technology for producing electrical energy“, said Duić. He pointed out that there are some obstacles that electrical companies put out so they don’t lose their control, but adds that “panels are still profitable in bigger parts of the world for households and businesses.

“Especially for objects that are more used in the summer and have electrical cooling and heat systems“, said Duić. Regarding refugee camps that need to supply electricity and heat for thousands of people, Duić explained that aside from panel, you would also need a solar battery to ensure a 24h system. “It’s more expensive, but still cheaper than diesel engines that are traditionally used in that situation“, he said. Since Duić was caught with my questions in the middle of his trip, he said he doesn’t have time to precisely calculate investment and profits but confidently responded that “it is certainly cheaper than diesel“.

89.173, 82 kunas in total was the coast of water in the camp. Rescue office also added that bottled water served to asylum seekers had various origins and that therefore they can’t determine their price.

Drinkable water becomes more and more a luxury, and many predicts that future wars will not be lead over oil, but over the life’s most required fluid. Jasna Hrenović is a professor on microbiology department in the  Zagreb’s Science and mathematical faculty, and is familiar with modern ways of purifying wastewater. She claims that technology of cleaning water has reached perfection. “Today it’s possible to get drinkable water from the sewer after several purification levels of it. Finishing filtration of wastewater through membranes with pores smaller than bacterias, viruses, or even dissolved salts, removes all unhealthy matter in water“, explained Hrenović. She added that such (expensive) technologies are not so far used in Croatia since it has enough supplies of drinkable water. Still, Hrenović pointed out that in Croatia water is purified with more classical methods for purposes of putting down fire, toilet cleaning or watering lawns.

For big amounts of waste water, it’s necessary to have big industrial plants, but herbal purifiers are perfect for your home.“ It’s normal in Sweden for a household to have a herbal purifier for wastewater before releasing it in the sewer. It costs 2000 euros with no additional investment“, said Hrenović. Herbal purifiers fit better in the environment, they are simple and cheap to maintain, have high purifying percentage and practically requires no electrical energy.

Still, regarding water supplies for thousands of people, which is the case in refugee camps, Hrenović points out it is cheaper to buy water, instead of reusing it. “Since camps are temporary places, it wouldn’t pay off to put water purifying instalments. Nevertheless, the sewers should be cleaned“, she concludes.

Environmental care is an important topic that everyone needs to address if we plan to stay alive on this planet. From picking up trash to serious management with all resources we have. As it is seen on the examples of refugee camps in Croatia, some things, such as recycling trash, reusing things like blankets and ensuring electricity and heat, could’ve been done better. Water was basically done the best way currently possible, but when purifying process becomes cheaper, there will be no excuse to use it. Some hyper green solutions like zero waste lifestyle will in further notice remain reserved for those who care about environment, at least for our generation. But as we can see with asylum seekers, whose majority maybe doesn’t worry too much about environment, little things like picking up trash counts to improve life comfort in the refugee camps just a little bit more. 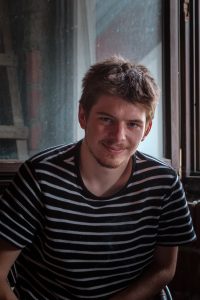 Ivor Kruljac is a student of journalism in the Faculty of political sciences in Zagreb. He wrote/writes for various small and third sector media in Croatia. On Zagreb’s Radio Student he used to be one of the hosts of an ecology show “A gdje su kitovi?“ (And where are the whales?). He is also active as a slam poet and writer, performing and publishing his poetry and short stories. His interests in journalism are culture, social issues and ecology.