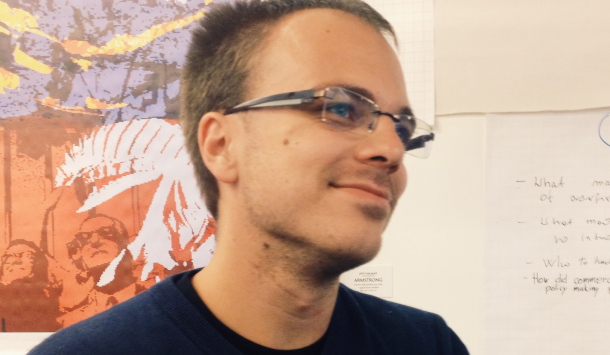 “The Greens are chaining themselves to trees and want to save the whales and these are not issues in Hungary, so what the hell do you want?”

Well right now I’m not really active. I was a candidate for the Hungarian parliament in the elections but I don’t have any particular role right now, just a member.

Our main issues are transparency, human rights and also renewable energy because Hungary is building the country’s second nuclear power plant, founded by the Russians. Were not very happy because of that. We’re trying to get the papers to read the studies between this new investment but the government says they can’t let anyone read it because its a matter of national security….

I think the problem is that our messages are just too complicated for the average Hungarian voter and we always struggle explaining what we really want to do. We look like an outsider in the Hungarian society.

Poverty, unemployment.. The most recent studies show that almost 40% of the Hungarian population lives below the standards, the minimum wages and social issues.

What would the average person at home say about the Greens?

He would say big stereotypes… Like you know the Greens are chaining themselves to trees and want to save the whales and these are not issues in Hungary, so what the hell do you want?

I wish I knew! I can’t explain! I always try to explain but she doesn’t really seem to understand. She thinks that what we really want is really nice buts its impossible to do in Hungary. So she thinks its a nice hobby, that’s it.