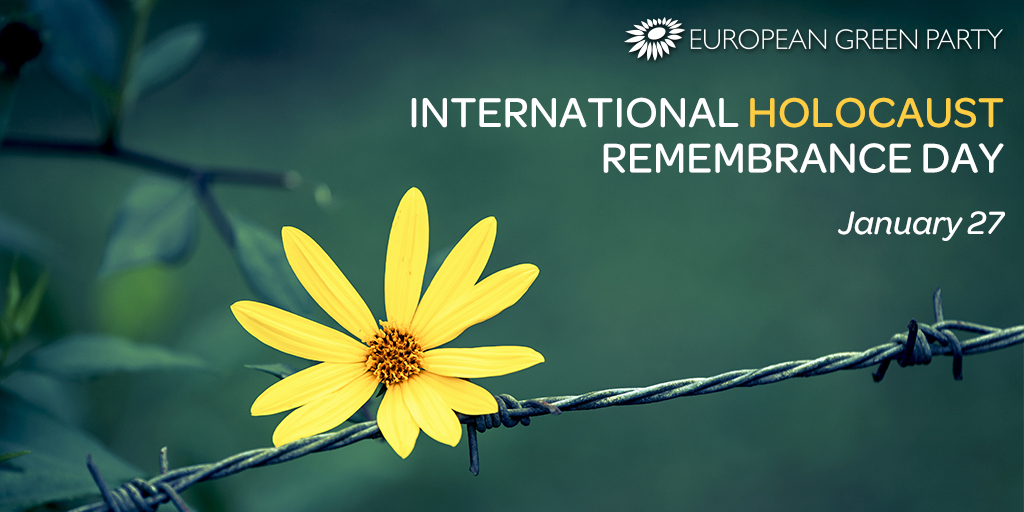 As we know “History is the best teacher with worst pupils”.

On 27th of January we should remind the planet, how we as a human beings can be mistaken if we are following issues based on hate and fears.
We all remember what happened with Jewish minority in Europe during second world war, but as we see from temporal perspective represented in most of TV channels, we already forget what was used as the reason and how this situation was installed.
As we remember, Nazis started realization of their ideology based on social and racist segregation, because of their self installed clear image of common enemy. Even they started from communist as an official guilty who burned Reichstag, they continued with others as the Jews and etc.
The main trick in this situation was frightening. When you feel unsafe you can pay as much as  the frightened demand, because even in 21st century the main issue for people in their life is their life.
Now we can see the same situation as when terrorist organizations had grown by support from the USA and some countries from the EU had started to play role of main enemies for those who organised and sponsored them.
When you are politician who is frightening your own citizens you can spend as much resources as you need  for realization “safety program” and nobody will be against that, except those who remember history lessons, can follow the situation through independent analysis, avoid fake informational channels and understand what’ s really going on.
Challenge for Europeans with image of Islamic extremism started quite long time ago, but last two years it’s taken most attention in all mainstream media and needs active influence from citizens side.
If we will go through short investigation about last attacks in France we can understand who is playing which role and on what side should we stand.
Daesh as an organization appeared in IRAQ in 1999. It pledged allegiance to al-Qaeda and participated in the Iraqi insurgency following the March 2003 invasion of Iraq by Western forces.
After several Russian and Chinese vetoes during voting in UN on international military invasion to Syria and referencing to the international criminal court, Daesh was used and sponsored by the USA as a forces against Bashar Asad Regime.
Now, Syrian crisis continued and thousands of people were killed by weapons and guns made in Russia, USA, France… How these weapons came there still not in agenda of the biggest informational channels.
We had seen how 7th January 2015 Charlie Hebdo newspaper was attacked by Daesh and main reason why it happened was made clear.  Officially, because of the caricature images of Mohamed.
On 30.09.2015 Russian president, whose rank was on the top during Ukraine crisis, already wallowed in war with Ukraine and couldn’t benefit more from conflict with neighbouring country. He started military campaign in Syria and declared war to Deash for supporting Bashar Assad, which provided him a possibility of  hosting the military bases.
After one month on 31.10.2015 a Russian tourist plane in Egypt was bombed by Daesh. It negatively influenced public perception of the Russian campaign in Syria. Russian citizens thought that their safety cost more than political interest and were standing against Russian forces in Syria.
When on 13.11.2015 Paris was attacked by Daesh without any clear demands and reasons declared from their side, public perception in Russia was changed and most of people started to support military invasion in Syria by Russian forces and Putin’s rank started to grow again.
Even François Hollande, for the first time in his presidential career, gained popularity among French citizens and collaborated with Putin in military campaign in Syria.
It wasn’t a surprise that in regional elections on 13.12.2015 in France ultra right party National Front, who was accused of getting financial support from Russia took third place on election by playing on anti-immigrant rhetoric.
We can’t differently say who is organising terrorist attacks and who is an author of distributing xenophobic behaviour. But we should strictly demand to be fair. Those who based political platform on hate are interested in existing frightening conditions, because without that they will not have power.
Shall we play role in this historical trap?
All over the world there are 1.6 billion Muslims. Terrorists organizations as Daesh have maximum 30 000 forces who are getting salaries from unknown foundations. It is real motivation to be part of this group and not faith or religion. Look around, and ask yourself how often in your real life you see aggressive refugees and compare it with cases when you see them as doctors in clinics, diverse workers and same people as you and your family are.
Europe had several waves of immigrants,  from Muslim countries as well. Only in Poland were more than 80 000 migrants from Chechenya and nothing happened with Polish identity, there were no terror acts and other bullshit. But now Polish government as some other EU countries frightening citizens before less than some hundreds people from abroad even arrive.
We are living in the 21st century, and we hope that it will provide opportunity to do not repeat mistakes of the 20th century. We hope to construct a world that is fair, full of opportunities for self realization regardless of your country of origin, religion, sexuality and other social stamps.
Yauhen Herasimenka
Member of Executive Committee at Cooperation and Development Network Eastern Europe and Activity Coordinator at Belarusian Party “The Greens”
Photo: European Green Party