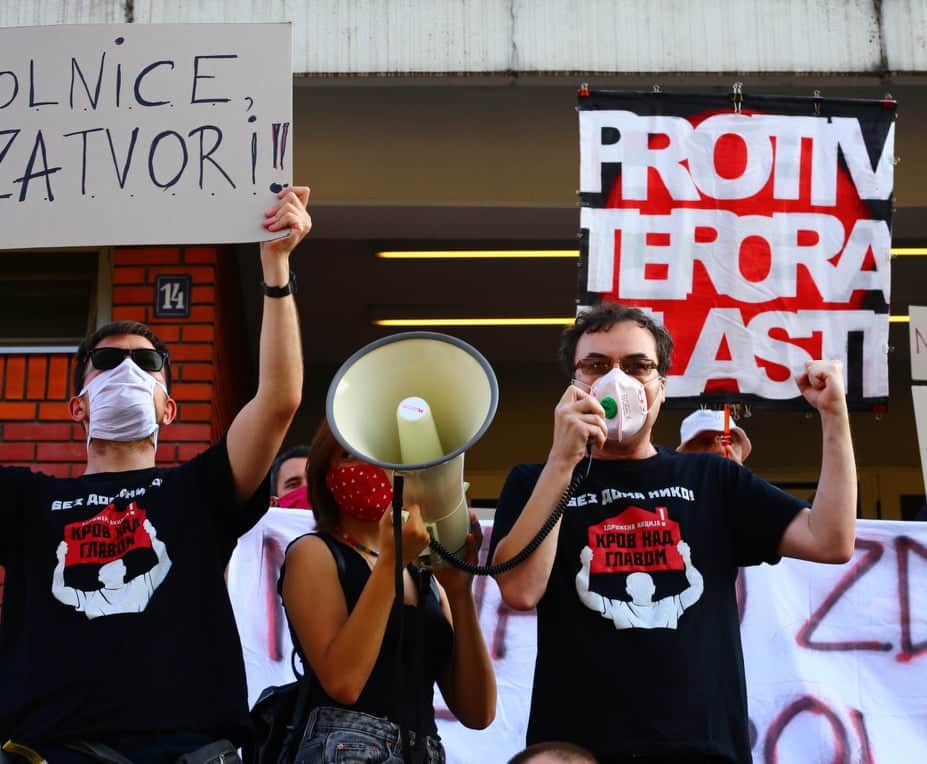 It may seem absurd that in Serbia housing is a major issue, considering the facts that more than 95% of homes are privately owned and that there is a notable percentage of empty housing. It seems even more absurd, if unsurprising, that the institutional and legal framework put in place to help those who survive on the very edge of livability has broken down so badly that citizens have self-organized to perform the function of said framework.

An overwhelming percentage of people in Serbia own inherited housing, and therefore do not face the instability of renting on an increasingly volatile market. Still, due to the ever-soaring price of living and the stubbornly stagnant wages, many of the poorest residents face the possibility of evictions because of unpaid electricity bills as low as €4,000 as well as other, increasingly nonsensical and arbitrary criteria. The national social assistance system places severe restrictions when it comes to eligibility, and the aid itself is often insufficient to support the families it is granted to. The minimum wage is too low for people to be able to afford basic necessities, and many of the most disadvantaged citizens – mainly those of already vulnerable and marginalized communities – are forced to virtually work themselves to death and/or turn to unconventional and often illegal activities, such as begging and petty crime, in order to make a living.

Where government institutions and programs have failed people, local organizations and initiatives have stepped in. Multiple groups of citizens have self-organized and set up networks to fulfill the functions of the failing institutions and are offering different kinds of support and help to those who live on the streets, in abject poverty, or lack a stable source of food. In doing so, they have created a para-institutional support system. Members of these groups organize and conduct all kinds of activities: a local collective called “Združena akcija krov nad glavom” (Joint Action Roof over the Head) physically protects people from being thrown out of their homes, another one, Initiative A11, offers legal and administrative assistance to those facing court hearings or trying to obtain social benefits, and a third one, “Solidarna kuhinja” (Solidarity Kitchen) independently prepares and distributes meals to Belgrade’s homeless and poor. An organization publishing a magazine, “LiceUlice” (Face of the Street) employs people from marginalized communities, including those living on the streets, and a coffee shop called “16” employs youths living in informal settlements. The most prominent institution offering shelter, food, school supplies, cultural activities and the like to homeless youths is “Centar za integraciju mladih” (Center for  Youth Integration), which is an NGO.

The world health crisis brought on by the coronavirus pandemic has only aggravated these issues. During the lockdowns and the austerity measures, people were asked to stay in their homes as much as possible and to avoid social interactions, as well as to work from home if possible. Those who lack a roof over their heads or housing basics such as plumbing and electricity were not taken into consideration. Inicijativa za ekonomska i socijalna prava A11 (The A11 Initiative for Economic and Social Rights), a local organization that works on defending citizens’ economic and social rights wrote to the government, requesting the formation of a body that would be tasked with solving issues arising for the extremely poor and homeless, but received no feedback. The only government institution which serves as temporary shelter for the homeless has been closed for the better part of the year, and it has been reported that those who found themselves inside were prevented from leaving on pain of not being able to get back in. Conversely, since the beginning of the pandemic, many of the local initiatives and organizations have demonstrated great potential by expanding both their reach and the range of their services, as well as intensifying their activities.

The efforts of these local initiatives and organizations working from different angles to help the homeless and the poor have shed light on one elementary truth: that we as citizens, we as societies, must acknowledge that the issue at hand is systemic and that it is insufficient to only treat the symptoms without addressing the root cause, which is a lack of adequate social assistance by the state. The government is the entity that should, by law, provide the crucial security nets that protect people from ending up in the streets or not being able to live on a minimum wage. Yet, although providing social assistance is the obligation of several government institutions and programs, it is being left to citizens and neighbors. It is time we opposed this shameful practice. We cannot allow the government to continue underperforming and effectively outsourcing its obligations and its institutions’ work to handfuls of philanthropists, volunteer activists and Good Samaritans. Moreover, nothing can be achieved by sporadic, limited-effect actions within the bounds of nation states. Such universal and dire issues must be dealt with systemically and on a global level, and viable solutions need to be incorporated in green political movements. A green transition that ignores social issues leads to social crises and is therefore unsustainable. There can be no greener future without social justice and the strengthening of social security systems.

Nina is an ethnologist and cultural anthropologist with a passion for visual anthropology. She is equal parts obsessed with youth and popular culture and with social justice. She has experience in research and advocacy and policy-related work in the civil society sector, most notably regarding public health, participatory architecture and marginalized community issues. In her free time she likes petting all the animals, trying out different cuisines and daydreaming about the eco-socialist revolution.