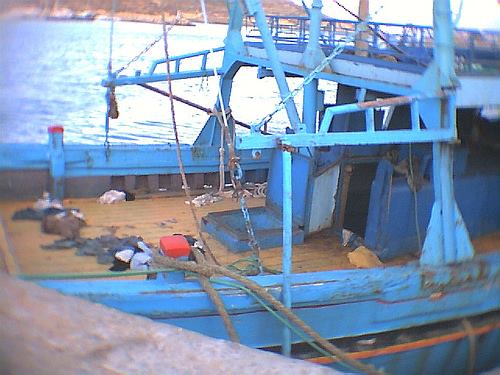 Illegal Immigration in the Mediterranean region has become a top priority issue on the political agenda of the neighborhood countries. The measures and restrictions for visas and immigration taken by countries in the Mediterranean have increased the demand for smuggling from African coasts towards Europe. Hundreds of immigrants manage to reach the shores but there is no accurate data on how many individuals die while crossing the desert.

The sinking boat tragedy in Lampedusa last October, still echoes in our heart and people who died were mostly from Somalia and Ghana. Illegal immigration across the Mediterranean region has become an every day reality where thousands across the years have been smuggled and risked their lives. According to statistics, Somalia is the first country of origin and in 2009 there were about 2, 387 applications for asylum out of which 1,446 were women.

Hani, a young woman from Somalia has paid 1,0000 dollars to smugglers in order to go to Europe but ended in Malta instead. Later, she was taken into a detention centre as part of the procedure for illegal immigrants and then moved to a residential home for Refugees, in Malta. Today she smiles at the rays of the Mediterranean sun are casting strong warm shadows on her beautiful face. Yet, Hani has a story to tell. She recalls the war in her country and remembers one particular day, when she went with other women and her six year old daughter Namina, to collect water some miles away from the village. By afternoon, they returned back, only to find their houses destroyed and attacked by the Military soldiers. Hani ran away from the place looking for her husband Hamid but he had perished in the attack. Suddenly, everything seemed to collapse for Hani and Namina was her only reason for living. Against the country s’ traditions, Hani decided to work and with every dawn, Hani set off to the market to sell bananas taking Namina with her and often remained till dusk. Then one day, when Hani was in the market, she saw two large men approaching her and then of them brought out a knife and pointed it her.

They were robbers from Mogadishu and they told her that she was not supposed to be there working and started hitting her and took all her fruits.

Then, the two robbers raped Hani in front of her daughter and then they attempted to rape her daughter but Hani managed to hit the men and ran away taking Namina. The two traveled from village to village until the opportunity to leave for Europe came but it was not going to be an easy path. After crossing Ethiopia, Hani and her daughter found themselves in Libya. Upon arriving in Libya Hani was separated from her daughter and sent to prison where immigrants are often treated badly and were often beaten by guards. Hani was released after six months and then someone offered her to take her to Europe. Hani spent all her saving money but she was traveling without her daughter. Yet, if she remained in Libya she would die losing every hope of ever seeing her daughter again.

Now there is hope as the refugee workers have traced her daughter.

Hani managed to survive but there are other women who unlike her do not succeed. Women in countries like Somalia are constrained to flee from the country in order to escape violence and may decide to move away only to enter into another entangled web. Most often, these women end up transported illegally out of Africa. Taking this journey is without doubt not short from its perils as women along with others are forced to cross through deserts for long days till they reach the ports of Libya. While in Libya, women migrants are detained for periods of up to eighteen months in Libya where they are kept in prison and subjected to torture and deprived of medical care and even food. Some are released and manage to embark on journeys towards Europe where they may be exposed to sexual violence.

If they manage to reach the shores, immigrants are then kept for long periods in detention centers till they are identified.

Unfortunately, this is the real situation afflicting the Mediterranean region. Immigration should be a rightful process for social mobility; therefore we need more political will to end this human smuggling and abuse of these poor souls.

This blog post can be found also on the blog of the FYEG Working Group on Migration, Culture and Identity, on with other articles on the issue, in following this link.