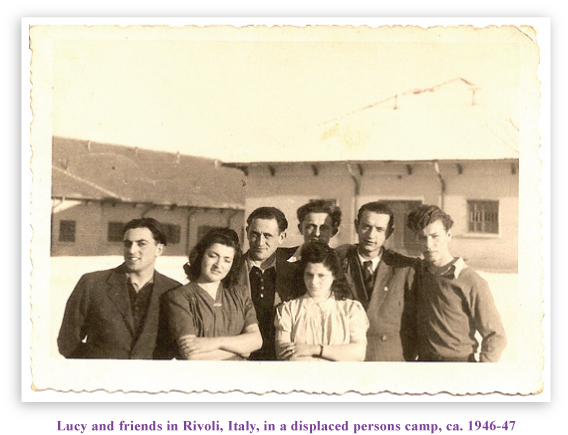 (photo of Lucy and Friends in Rivoli, Italy in a Displaced Persons Camp, ca 1946-47. Taken from www.lucymandelstam.com)

Last week, my mom sent me video of her mother’s testimony given in 1989 at Yad Vashem, Israel’s Holocaust memorial. It’s on YouTube now, in three hour-long sections: my grandmother’s childhood in Vienna; the time she spent during the war in Theresienstadt, Auschwitz, and Stutthof; the year or two she spent in a camp in Cyprus before finally making her way to newly independent Israel, where my American dad met my mom in the late seventies. I listened to my grandmother and her interviewer, who had a strong Israeli accent, and compared notes with her memoir, which she would write about ten years later.

I also compared her story with the Holocaust Narrative we have in America, which goes something like this: a Jew is living a comfortable if not affluent life in one of the great metropoles of Central Europe. She sees her freedoms slowly curtailed, first by the Nuremberg Laws, then by Kristallnacht, then finally by deportation to a ghetto like Theresienstadt. From there, she is sent with hundreds of others on a cattle car to Auschwitz. Here the story ends: she is gassed—often on arrival—or, if she is lucky, spends a year or two living among piles of corpses before being liberated by the Allies and forsaking continental Europe entirely, emigrating to Israel or an English-speaking country. There is also, I should mention, a counter-Narrative: the Holocaust was not just a tragedy for Jews, but much broader than that; other groups simply had worse PR. In the counter-narrative, our protagonist is gay, or Roma, or wheelchair-bound, or a Polish resistance fighter. Her story is otherwise the same.

My grandmother’s Holocaust story, like many Holocaust stories, does not fit the Narrative very closely. I had heard my grandmother talk about her time in the war when I was younger, and later read her memoir, but by the time I watched her testimony, it had been years since I had heard her story in full, and I was fuzzy on many of the details. To me, my grandmother’s experience in the war wasn’t so much a series of specific occurrences, but something I usually heard filtered through humor, my family’s coping mechanism of choice: my mother telling her and her siblings’ favorite Holocaust joke in polite company, or cracking up while warning me not to mention asparagus in my grandmother’s presence unless I’m ready to hear her hold forth again about how she always sees stories on German TV that they can’t find laborers willing to do the backbreaking work of picking Spargel, while the Nazis had forced her and a few dozen other teenage girls to pick Spargel. When I thought about my grandmother’s story itself, I borrowed liberally from the Narrative—so I was surprised to hear that her mother and sickly sister made it all the way to Stutthof before they were killed. I had simply assumed that they, like so many others, came to Auschwitz and never left.

In her Yad Vashem testimony, my grandmother relates other things you don’t usually associate with the Jewish experience in the Third Reich: how, after her time on the asparagus farm in 1941, she was sent back home and had to work in a factory alongside non-Jews, for a wage. How, while so many others languished in Stutthof, she regained strength working on a farm with British POWs, all forced laborers sent to replace the large percentage of German men who had been conscripted. How she spent the next winter digging anti-tank trenches in sub-freezing temperatures, with only filling stolen from blankets in Stutthof for warmth. How it was so chaotic as the Soviet army approached that she escaped from a death march by accident, and later posed as one of the masses of German refugees escaping Danzig, showing up at the railway station to go somewhere, anywhere, on any train that would pass through. The interviewer lets her tell this story, but never loses sight of the Narrative. Again and again, her questions pull us out of my grandmother’s narration to cover her checklist. One favorite topic of hers is what my grandmother knew at particular times—rumors and stories traveling from Jew to Jew across the Reich—a topic that appears nowhere in her memoir, except for a few mentions of my grandmother’s attempts to learn the fates of her family members. I understand that this is an effort to get the most thorough testimony possible, but at times the interviewer is clearly more interested in collecting evidence than in actually listening to my grandmother. A good hour and a half in, she asks my grandmother if she spoke German well. My grandmother, who had mentioned going to an elementary school with gentiles and had been pronouncing German words with a perfectly native accent throughout, is taken aback. She replies: “It’s my mother tongue!”

Although my grandmother is visibly annoyed at the interviewer, I can’t imagine she struggles with the Narrative like I do. She has lived through her experiences, and she doesn’t need to rely on anyone else to remember them. For me, though, the Holocaust will never be more than an inherited memory, a part of my identity passed down from earlier generations. I want to be able to hold onto my grandmother’s stories, just like my father’s father’s stories about working as a sound man for CBS. But the Narrative is overpowering, and it belongs not just to one nation, but indeed, to all of humanity. I cannot think about my grandmother’s life without the Narrative interfering—and I get the sense that a small part of who I am has become subsumed by a much greater story about who we are. A piece of my identity that I would rather have be intensely personal and familial has been replaced by historical tropes. And while, of course, the benefits of remembering the Holocaust far, far outweigh those of forgetting it, I can’t help the tiny, nagging feeling of personal loss.