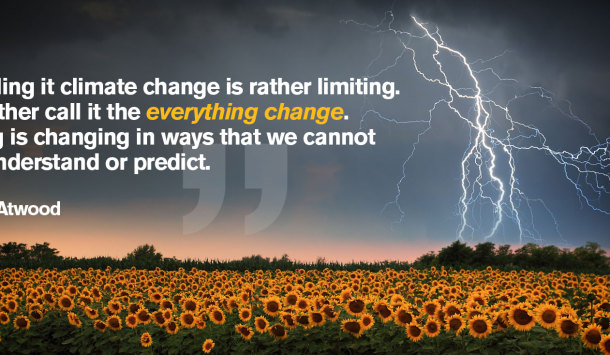 In the UNFCCC: An interview with Manjana Milkoreit, post-researcher fellow at the Global Institute of Sustainability and Arizona State University.

Could you present yourself, and tell us more about your activities back home ?

Ma name is Manjana Milkoreit, I am a post-researcher fellow at Arizona State University, where I work at the Global Institute of Sustainability. I have a background in law, public policy and global environmental governance. As a post-doctoral researcher, I work mainly on the issue of cognition and emotion in the role of climate change politics. So, I look into questions of how the mind works, and how that effects how climate policy and politics is being made at different scales. All the way from the international, while looking at here in the UNFCCC. All the way down to the normal person/community kind of scale: what they think, what they feel and how that affects how we make politics.

I am particularly in two specific issues in that field:

I also teach a couple of other things, but this is the main stuff.

You mentioned the difficulties that human beings can face to imagine the future under climate change. Can you elaborate on this idea ?

Yeah, this is a very complex and big issue thinking about climate change. I want to separate two things: one is people that let’s say deny that climate change is real, which is the scepticism debate. This is mainly present is the United States. So maybe this is not the most interesting here, but more how it is generally difficult for people to engage with climate change. On that issue, I will take three main clusters of argument I could make:

In the UNFCCC negotiations, can you identify these cognitive mechanisms ?

Some of the problems are not so prevalent here. For example here, most people probably engage with the science a lot more. You don’t have to try to get them involved because their job consists in talking about these problems all day. But I think a couple of these issues I am trying to research on are prevalent here too and that’s what I am trying to follow actually. Issues of thinking about the future, and of bridging scientific information and political positions. What does the science mean for a for a party, or a country or an NGO. What does that mean for how they should position themselves? So, I look for those linkages between the science and the policy both in the ADP process (like how people talk about their long-term goals, mitigation commitments, time-frames). Does the science play any role in that position, what are the arguments they are making. But also in for example the review process 2013-2015, that talks about the long-term goals. I follow these items. At the same time, I look into how the people think about the future.

The third item I follow is the place of the emerging powers, which until one/two years ago were quite active. China, India, South Africa and Brazil formed a group called BASIC, but they are currently not showing up as BASIC any more. They have kind of left behind that label, and they are representing themselves as developing countries again or acting more individually within the G77 and China.

I have heard you did some research on pop-cultural mobilization around climate change, can you explain a little more what that means?

That work is very much linked to my work on cognition and emotion. I observed something very interesting I thought, which was a political blogger is the US starting making a connexion between the TV show Game of Thrones and climate change, arguing they are a lots of parallels between this fictional world in GoT and how the people in the real world are responding to climate change. What was interesting about this is that they tried to use this cultural phenomenon and the passion the people have for the show, to make a political argument: pool into the climate conversation through the cultural experience of GoT. And they are millions of people who watched the show and read those books, so the potential to get people engaged in climate change through a cultural phenomenon like GoT or through a movie, a climate fiction book is big. Maybe much bigger than IPCC reports or anything else that happens here. I think that idea to instrumentalize culture to engage people in a more fun, enthusiastic or emotion-driven way in a climate conversion is potentially powerful. It also simplify the conversation and make it more understandable.

But, the future can be very scary then … ?

Oh well, it depends on how scary you think winter is in Westeros, right?

And again, that’s an interpretation of reality. Also how scared should we be about climate change. People have very different responses, they have different interpretations of the world, of their ability to respond, even of the science itself. What does it really say? There is a lot of uncertainty, so how we interpret the science also contributes to the challenges of perceiving climate change. This uncertainty leaves you lot of space to imagine the future.

You attended a YOUNGO spokes council yesterday morning, can you tell us the feelings you had during the meeting ? Do you think we are working way differently from other constituencies ?

I can compare a little bit with the RINGO (Research and Independent Non-Governmental Organizations) meeting. But first of all, I was very impressed about how it was organized. I mean you had a very rigorous agenda, you had so much to do but you found a manner to go through all your items in a very quick and efficient way. You have a lots of rules on how to interact, signals… I was really impressed! Compared to our RINGO sessions, they are lots of differences. We have very different purposes for being here. You guys are here to try to affect the process and you help and coordinate each other to influence this process. RINGOs come here mainly for observation purposes, so we are not really stakeholders that are trying to influence the outcome. We don’t organize like you do, our agenda is never asked for. We don’t have follow-up meetings like you, because we don’t plan things. So, we mainly exchange information, talk to each other about what we have observed. The purposes and the energy level are very different. The YOUNGO meeting was at a very high energy-level, which was a lot of fun but also stressful. I don’t know how the other constituencies are working but I just felt it was very different and impressive.