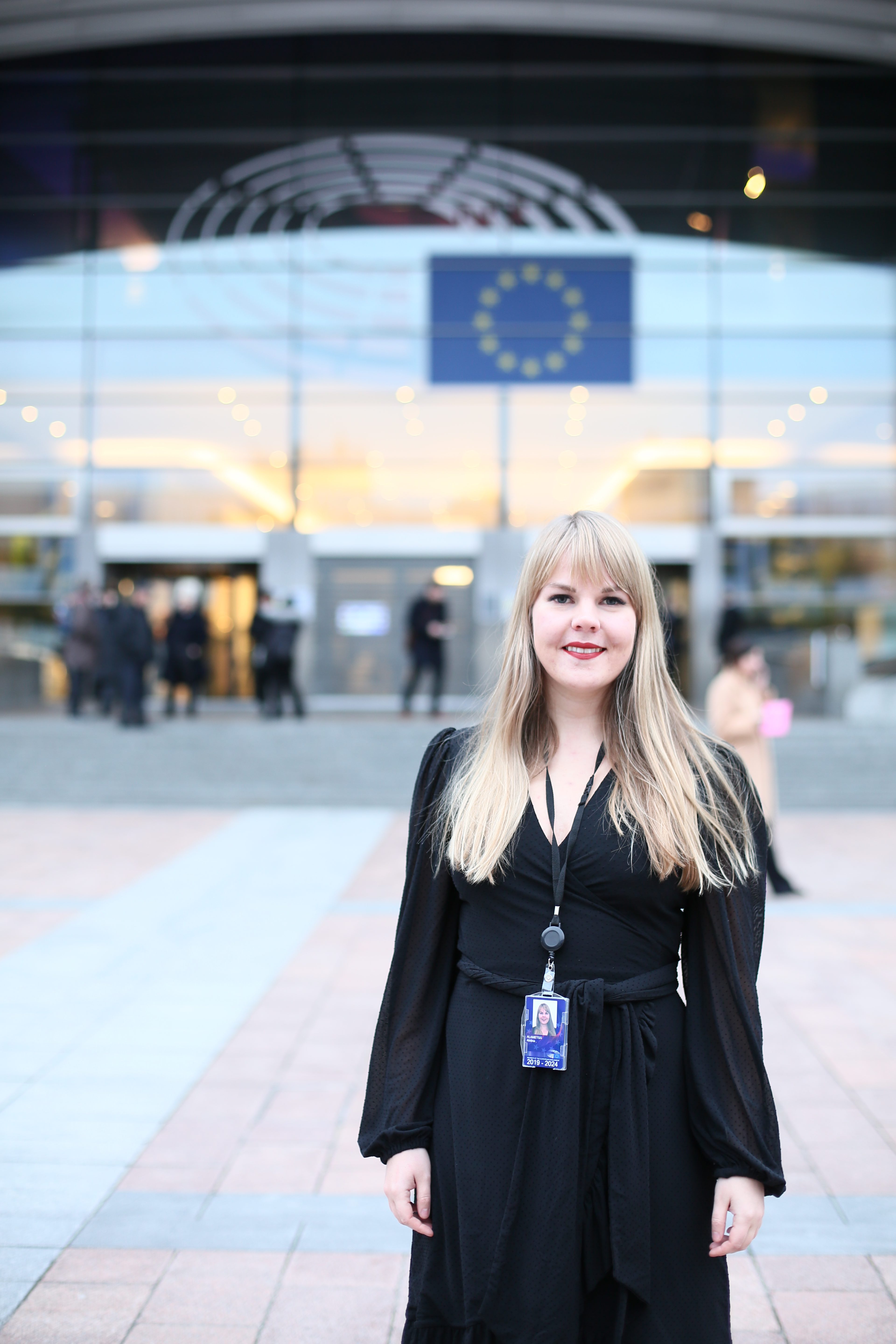 After the withdrawal of the UK from the European Union, European Parliament seats were opened to four new Green MEPs from Finland, Sweden, Austria, and France. We interviewed Alviina Alametsä, 27, from the Finnish Green Party, about her journey from being a climate activist and local politician in Helsinki to becoming Finland’s youngest MEP. Alviina told us what brought her into politics, what priorities she will push for during her mandate, and what annoys her most in politics.

Last year was a big year – you were pushing for a citizens’ initiative (CI) in Finland while running for two elections, and now Brexit opened you a seat in the European Parliament. What has the journey been like?

My life has changed completely in one year, but it’s been very exciting because I’ve had a chance to work with the things that I love. I founded the therapy guarantee initiative to push for better mental health service access in Finland. The CI gained 50 000 signatures and proceeded to the parliament. That is also one of the reasons that I ended up here in Brussels – people got to know me from this campaign. I would like to continue to work for better mental health policies on the EU level. But what makes this change feel so drastic is that usually MEPs have decades of a career behind them before they get elected. Maybe this time people wanted something different. I am of course very happy about this and want to be worthy of people’s trust.

We need more representation in decision-making to get things done.

What was it like to be a young candidate and run for an MEP position? Did you face any challenges that you think are typical for young people in politics?

Actually, I never really thought that it would be possible for me to get elected. Afterwards I have been thinking: why couldn’t young people be elected for a position like this? We need more representation in decision-making to get things done. For example, we need young people to have their say on climate issues, because they are the ones who face the impacts of the climate crisis. And we need people from different socioeconomic backgrounds because politics is not only for the elite. When I was growing up, I never really saw young women in politics, especially in the European Parliament. That’s why it was so hard to believe that I would make it. But on the other hand that made the campaigning quite relaxed. We were campaigning more as a movement, placing emphasis on the themes that I find important.

Do you have any words of encouragement for young people who are considering running for political positions- or any advice that you’d like to share from your own experience?

First of all, I must say that it’s possible. It’s not an obstacle if you don’t have a lot of funding or extensive political experience. We did my campaign with a really small budget. If you have a good group of people who support you, it might work out in surprising ways. Don’t take too much pressure about it either. If you at least try, I think it’s a great chance to promote the values and topics that are important for you. For example, even if I would not have been elected, I would have been really happy to have opened up a new discussion about mental health on the EU level.

I realised that if you want to make changes, you need to do it both in the streets and in the parliaments.

Was there any specific moment or topic that triggered you to get involved in politics? Why did you choose to become active in the Green movement?

I actually got interested in politics in a really tragic manner. When I was 15 years old, there was a school shooting in my school in Finland. It was a very traumatising experience – I lost a friend and I was in the school myself. Afterwards I heard that the shooter had psychological problems, but he was not considered a severe enough case, so he didn’t get help. This made me realise that there are definitely issues in the Finnish society: we don’t do enough to prevent violence, bullying and mental problems, and not everyone gets the help they need. After this tragedy, I started re-thinking my values and educated myself on different topics. I learned about climate change, started university, and became a climate activist. I was pushing for better outcomes of the climate negotiations as a climate delegate of the Finnish National Youth Council, Allianssi, then, the Greens approached me while I was  organising demonstrations in front of the Parliament. I joined the party and got involved quite quickly. That’s when I realised that if you want to make changes, you need to do it both in the streets and in the parliaments.

You, like many young Green candidates, have an activist background, but this narrative is often being excluded in the mainstream media. What do you think about that?

There is this certain media narrative around politicians that makes it seem like interest in politics is something you are born with. I think it would be important to show this other perspective because most young people don’t just wake up one morning wanting to be a politician. More often it happens through a certain process and opening up that process makes politics seem more accessible for all kinds of people. We should make the picture painted of politicians wider – you don’t have to be super confident and visible in the media to make a good politician.

What have been the most important topics for you to drive as a young Green activist and politician on a local level in Finland?

During my time as a climate delegate for Allianssi, I was pushing for the climate law in Finland, which passed in 2015. I was holding demonstrations with NGOs, with maybe 100 people participating, sometimes only 10. Now the climate marches in Helsinki gather 10 000 people. I think Greta Thunberg changed a lot – she started the climate movement globally. The IPCC report changed a lot, too. There is still a lack of means and political will, but at least now there’s discussion. In the Helsinki city council, I have been working on different ways that Helsinki can prevent a climate crisis. I’m still not satisfied about the fact that we are still powered by coal for the next 10 years – I’m willing to start Ende Gelände in Finland.

Apart from climate, many of the topics relate to the wellbeing of people. One very concrete thing that I have pushed for is better sexual education in schools. I did this after receiving messages from kids telling me how bad the situation is. In many schools, sexual minorities are not taken into account in sexual education at all. Now there’s this great Netflix series Sex Education. I made the initiatives three years ago, and I would’ve loved if that series would’ve been there then – it’s so inspiring. The city of Helsinki has now made a new policy on this and put more resources in it. Helsinki has also put into place an open mental health clinic and banned the use of public space from Nazi groups. These are both results of initiatives I started. Many cities in Finland have now initiated the banning of the use of public space from organisations or people who work against the UN Convention of Human Rights.

It’s important that the EU sees people, that we make politics for everyone, not only for those who are in good positions – the benefits of the EU should be visible all around the continent for different groups of people.

What are the topics that you are most looking forward to working on here as a Member of the European Parliament in the Greens/EFA group?

As a full member of the Foreign Affairs Committee, I want to promote human rights and the EU’s role as a peacebuilder. We need to make environment and human rights count not only within the EU, but in all aspects of cooperation and decision-making at the global scale, too. The EU cannot support trade deals or arms trade with countries that don’t respect human rights or the environment. I also have a vice membership in the Transportation and Tourism Committee, in which I intend to push for better train connections in Europe. It’s important that the EU sees people, that we make politics for everyone, not only for those who are in good positions – the benefits of the EU should be visible all around the continent for different groups of people. I want the EU to be something people can trust and be proud of.

What changes need to happen to make young people feel seen by the EU, and that they can trust and be proud of the EU?

First of all, we need to eliminate young people’s climate concern by taking concrete action. We also need to tackle other challenges that young people currently face, whether it’s unemployment or mental health issues. These are basic human rights questions that are not currently being fully taken up by the EU. For example, I have suggested trying Universal Basic Income in Europe. This could create more security in our everyday lives, especially for young people who often don’t have stable income. Mental health is also very much being ignored on the EU level. Often there are no directives or legislation on how to safeguard people from psychosocial risks. The lack of mental health services is having impacts everywhere. Mental health issues cost 4 % of the GDP in the EU area. It also has serious impacts on families and children. We need to be working preventatively so that the impacts are stopped before they reach future generations. The EU cannot dictate all the social systems of its member states, but we should assess the influences of the EU level decisions to mental health and wellbeing.

There are people who criticise millennials for not engaging in politics or being politically inactive. As a young politician yourself, what do you think about this debate?

I think that young people are actively excluded from politics. For example, older generations easily criticise young people for not voting. But often young people cannot be candidates themselves for different reasons – they might not have the resources or support to run. Not seeing young people in the candidate lists might discourage them from voting. It should also be addressed that voting is not the only way to have influence in politics. As a politician myself, I think it’s really important and valuable to have dialogue with people. I get a lot of ideas for my initiatives in the Helsinki city council from exchange with people on social media platforms.

If politics is seen as too elitist or exclusive, it discourages people from different backgrounds from getting involved. This is clearly something we need to tackle.

What annoys you most in politics?

The fact that politics is really elitist. Most political scenes are dominated by people with stable resources and certain backgrounds. Also, the terminology used in politics is complex and not accessible for many. Right now, the parties that speak very clearly about politics are often very nationalist or populist. I think this is also a threat. If politics is seen as too elitist or exclusive, it discourages people from different backgrounds from getting involved. This is clearly something we need to tackle.