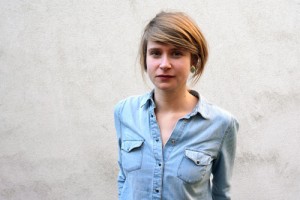 From the 22 to the 25th of May, 27 countries and over 500 million inhabitants will be given the choice to elect their 751 representatives at the European Parliament. But ow is it happening all over Europe ? Are campaigning, political issues, and Euroscepticism the same in Spain and Belgium, Lithuania and Great Britain ? How do young activists, young candidates and campaigners see their  political engagement at a week of the elections?  Together with La Souris Verte, the French Young Greens magazine, we are travelling Europe to get you inputs and insights from all over, from those who are making the elections from the inside. Today, an Interview with Eline Deblaere, young candidate in Flanders, Belgium.

Ecosprinter/La Souris Verte : Hi Eline, can you tell us about yourself?

I am Eline Deblaere, a 26-year old young Green, born and raised in Kortrijk, Belgium. Currently I live in Brussels. I have a lovely family with two brothers and three sisters of which one is my twinsister. In my free time, I like reading the newspaper fully on Saturday morning, play music or to go for a bike tour. I work in the social sector as a job coach of former asylum seekers. I joined the Green movement two years ago; when I joined the Young greens movement in Brussels. Today I’m in the board of the national Young Greens and 2nd substitute on the European list of the Greens in Belgium.

Ecosprinter/La Souris Verte : Why do you run for the European Election in Flemish region?

The E.U. is at the core of a lot of power, although most people are not aware of that. 80% of our national laws are European regulations, which is making Europe a very decisive actor in our daily life. Europe truly can change things for the good: tackling climate issues through a green transition, raising minimum social standards in order to increase the welfare in all member states, coordination of a common asylum system, … the problems of today are transnational so we need to answer them on the same level.

However I am convinced that a lot of questions should be handled by the E.U, I’m not reluctant to criticise the European Union as well. Immense youth unemployment, harsh austerity policies that suffocates its’ citizens, a too soft approach toward fiscal misuses, an embarrassing non – ambition towards climate change … the E.U can do better.

The problem is that a lot of citizens – and amongst them more and more young people – believe that the E.U as such can’t do more. That politics in general cannot do much when it comes to regulating international markets. That is why we need to look further then the so-called technocratic austerity measures the E.U takes and to consider them as more then mere economic science. Because in fact they are part of a certain political viewpoint, even though it is not shown in that way by institutions as the Troika.

The last decades the E.U has been established as an economic union, in which its citizens are considered mainly as consumers. We need to bring back true politics in the European Union by talking about what Europe can do when it comes to social protection, human rights, etc. Only that way I believe Europe can motivate its citizens for the future.

The Ecosprinter/La Souris Verte : Can you tell us about your background and your motivations that pushed you to get involved with the Greens?

Societal questions have always drawn my attention. From a very young age, I participated in the local youth movement and the Youth Council of my hometown. Today I want to take this political engagement to the European level, for several reasons.

After studying Social Work in Kortrijk and a three months internship in Kerala, India I moved to Ghent to study International Politics. This is where I catched the E.U microbe. I learned how this project brought peace to a continent that had suffered war for centuries, how big the political influence of the E.U in fact is and how it has changed the lives to all of us, European citizens.

After that, I studied in Rennes, France for a year and then finally moved to Brussels, where I did an internship in the European Parliament. One of my main topics was the impact of lobby and other interest groups on European policy making. After that, I became a member of the board of the Young Greens in Flanders, the Europe working group and the local Brussels department. Interesting times, in which I learned more about the Green alternatives and the way social, economic and environmental problems are strongly connected and should be tackled in this same interlinked way. I got to know many fine people and enjoyed it to the fullest. Throughout this campaign, I cannot wait to go to the streets to motivate people to reclaim Europe and to bring it back to where it should be: close to the mind and the heart of it’s citizens.

Ecosprinter/La Souris Verte : What is your ultimate vision for greener Europe?

I don’t believe in a big European Master plan or a revolution. What I do think is that to establish a green Europe it will be important to make serious transitions on different levels and in different subject at the same time. Not only European, but also on the level of countries or cities. Not only in classic green topics but also when it comes to poverty reduction, fiscal measures, education policies, etc. Europe thus should implement its policies not only in a Green way but also on the level that is the most appropriate one.

Greening Europe should also exist through a strong civic society. Because apart from the market and the government, there is a third important actor that needs to be supported too: cooperatives, grass root level movements, peer-to-peer networks, etc. These structures are sometimes difficult to grasp because they do not fit into our classic way of policy making but we should welcome them and frame them well. They have a very mobilizing capacity and bring new and fresh ideas.

Ecosprinter/La Souris Verte : At last, what is your personal view on today’s Europe greener policy?

It is hard to name Europe’s policy as a “Green” policy. I think the E.U has known a drawback over the last years and that’s a mistake. What we have today is merely a neoliberal policy that is sometimes added with a green “gadget”. But as long as we frame Green policies in a purely market based system we will not come to serious action. An example is the ETS that is not working because of the crisis, the drop of the carbon price that was a direct consequence of that and too much free emission rights that were allocated to enterprises. If we want to set a fair price for CO2, we should implement at least a minimum price and to get rid of the free allowances.

In daily life, I work for a NGO that gives training to migrants who want to become a social guide for asylum seekers and other newcomers. It is a very practical job, in which I try to let people see their talents and skills, and how to work on shortcomings. It is from this same approach that I want to do politics: with a clear and critic stance, but at the same time positive and convinced of the many possibilities it holds.

These interviews are part of a serie of interviews realized in partnership with ‘La Souris Verte’, the magazine of the French Young Greens.