Discussion of Europe has become black and white. Questions of ‘growth or austerity?’; ‘in or out?’; ‘yes or no’ polarise and exclude people, countries and solutions. The recent conference of the Federation of Young European Greens (FYEG) splashed fresh colour and vision onto an otherwise bleak picture. 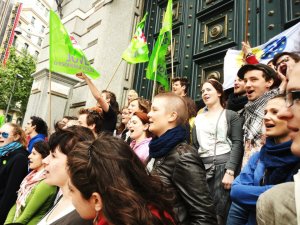 Traditional EU borders are of little significance for membership of FYEG. The criteria are simple: ‘if you feel European, you are European.’ It consists of 38 member organisations from 34 countries, spanning from Georgia to Portugal, Finland to Turkey. Within an organic framework it is defined by an inclusiveness and variety that is somewhat missing from the strict, manufactured membership of the EU. In the hills above Barcelona, in the autonomous region of Catalonia in Northern Spain, the FYEG delegates debated their policies for Europe.

There is much more to this than green politics, it is a vision of a new politics played on an equal footing. The incentives for engagement are not expressly material or binding  instead it provides a medium for exchange of best practise on everything from gender to banks to voting systems and allows enhanced cooperation wherever desirable. There are no barriers to entry, nothing to lose and everything to gain. It is an open source style of politics for a generation of Wikipedia users who understand the power of shared knowledge and transparency.  Politicians of all persuasions would do well to take note.

There is no doubt that part of the energy is flavoured by youthful idealism but this should not be dismissed. If there is a moment in recent European history when a new vision was needed for our society, it is now.  Vision is fundamental to the successful cooperation of FYEG; shared end goals allow room for difference in the detail. As Jeroni, a member of the Dutch young greens, pointed out after the working group on Responsibility to Protect: ‘perhaps young people are more ideological than realistic at times’ but ‘this is not a bad thing, for example, the UN may not become democratic tomorrow but we shouldn’t forget that that is what we want.’ And yet in the very same working group the practicality of this cooperative approach was equally evident.  Vladan, originally from Bosnia and currently studying management in Belgrade, spoke with more authority on the reality of intervention and regional conflict than the Swedes and Dutch put together. This may seem obvious but it is rare that the three sit around the same table and normally the Swedes do the talking. Difference in approach is incorporated and learnt from; the organisation’s Political Platform which was voted on at the conference was fiercely contested and strong differences remained.  However, the platform allowed for everyone to stand on it and point in different directions, the important part is that everyone stands on it.

It is this balance of passion and realism which suggests that the FYEG model has blueprint potential. It seems to flow naturally from the unrestricted membership. On the one hand an Austrian delegate, during a conversation on religion acknowledged: ‘I suppose everyone is just looking for something to believe in, for some it’s Jesus, for me it’s green politics!’ On the other, both Antonina, from Belarus, and Vladan argue that while the spread and development of green ideas is important to them the real value of FYEG is in its political education and youth participation. As Antonina puts it, ‘it allows those with different backgrounds, cultures and languages to share space.’ Vladan says that ‘Politics is a dirty word in Serbia and being exposed to different perspectives can change this.’

It was striking that while the crisis inevitably dominated the conference it did not over power it. The sense of impending doom which hovers over swathes of Europe was trumped by a hope for systemic change in the way politics is conducted.  There is a sense of opportunity in crisis. Indeed, walking along the Barcelona seafront it is hard to miss the Columbus Monument pointing to the new world and it might just be that young, green, inclusive politics can provide some colourful inspiration for a tired and beaten old Europe.