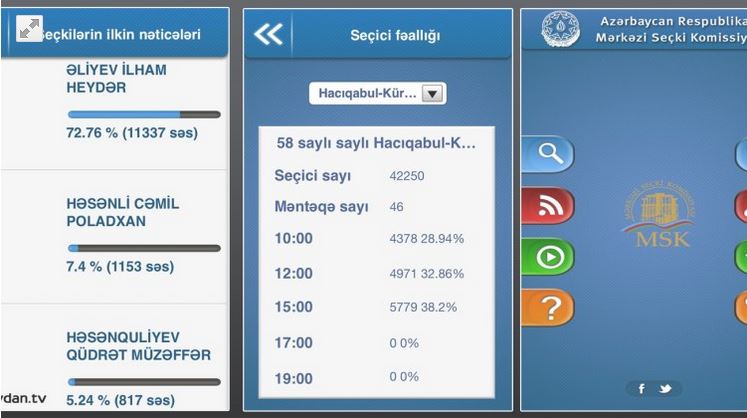 Today are taking place the presidential elections in Azerbaidjan . But the results are already known since yesterday, pre-announced through a major phone app failure.

Central Election Commission of Azerbaijan has introduced an IOS and Andoid app specially for elections. Users that downloaded this app already can see the results of the presidential elections that will take place tomorrow in Azerbaijan. “The results” of the elections are as follows – Ilham ALiyev 72.76%, Jamil Hasanli (the single candidate from opposition) – 7.4%. There is also information about how many people have voted, names of the precincts, how many voters voted at various times during the day. Central Election Commission obviously forgot to activate “This section is currently closed” button.

The app developer’s name is Vusal Isayev. We have a screenshot of his dialogue with our social media manager Hebib Muntezir, where Vusal introduces himself as the app’s developer and requests to remove the news piece from Meydan TV. He claims that it was a test and it is “OLD INFORMATION”. Here is an extract from the exchange:
Hebib (Meydan TV): If it is old (elections), then why 72% for Ilham Aliyev? Vusal Isayev(App developer): They gave me old information. Hebib: If it is old information, then why Camil Hassanli was in it?
Vusal Isayev then proceeded to close his Facebook account. Meydan TV has screenshots of the entire conversation.
Mr Isayev’s LinkedIn profile said he is a Managing Director of a company called “Happy Baku”. Happy Baku is the company which has developed the app (see here: https://itunes.apple.com/us/app/m-rk-zi-secki-komissiyas/id710409754?ls=1&mt=8).

This article is an article from Meydan TV that you can find in following this link.