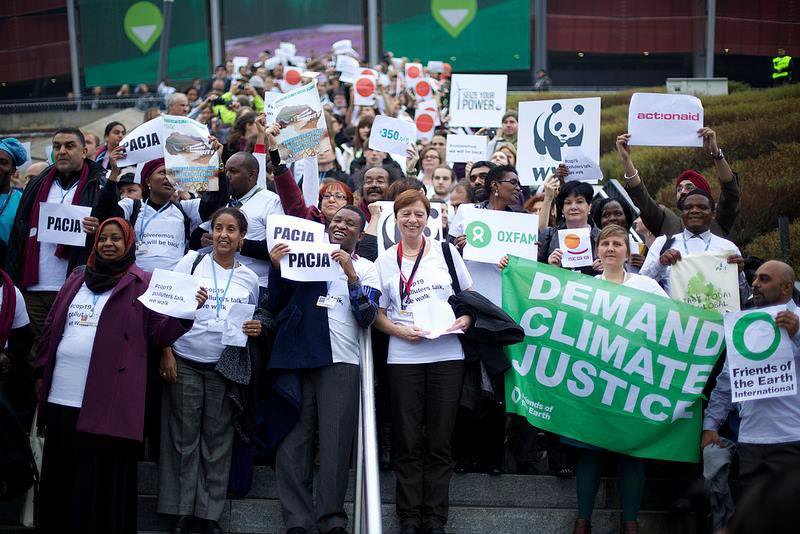 You haven’t heard anything from us since some time. But we are back. For this one newsletter. Our absence on the sphere of the internet has various reasons. One is, that we all travelled home. We travelled home after two weeks of crying, shouting, holding banners, being angry, feeling together with the civil society groups, rechanneling our disappointments & lost of hope to future plans of action especially within Europe, being separated, blogging, long nights without sleep more than just a few hours. We attended meetings, which were hard to follow, we attended meetings, in which we shouldn’t have been, we attended secret meetings of nations, we were planning how to mobilize for the UN COP21 in 2015 in Paris…and we attended very secret meetings only a few people knew about, and which happened at 1AM. And in the end, we walked out together with Civil Society organisations to demand climate justice and to deligitimise COP19 which failed to represent the people and the planet.

Big walk-out by the civil society

On Thursday large parts of civil society left the negotiations as a protest against the low ambition of the climate talks, and the fact that NGOs were not listened to. Several hundred members of civil society stood up and walked out. On their shirts it was written: “#COP19 Polluters talk, we walk!” and in the back “#volveremos – we will be back”, which aims to be back in the process for the next Climate Summit in Lima.

FYEG participated in the campaign. Read our press release here.

The biggest thing was not the walk-out in itself, but more who participated in it. After the Climate Summit in 2009 in Copenhagen, there was a break through the Civil Society. Copenhagen is the reason why so many different NGO-networks, especially the Climate Action Network and “Climate Justice Now!” left the bigger group: after Copenhagen, many big capacities left civil society. In Cancun, especially young people were trying to find their place back into this process. In Durban, it seemed like the NGOs were using more energy in fighting each other than in pushing an ambitious outcome.

And then, this Thursday morning at 1AM they united again.

It was a meeting at the Convergence Space in the town of Warsaw, outside the venue, where civil society was meeting. A mail with only specific recipients has been send around, saying this mail should not be spread and that there would be a discussion at 9PM on Wednesday at the Convergence Space. We went there and all heads of the “big Greens”, the seven big Climate NGOs attended. At 1AM there was a temperature check, to see how many NGOs would agree to walk out, and many hands rose. And we walked out. Until COP 20 in Lima.

The climate adaptation fund, which was setted up in 2008 to provide money for poorer countries to adapt to the impacts of climate change, was “running out of money”, but donors at Warsaw have agreed $100m for it during this COP. That is more than we could hope for, even though it’s still not enough. Here you can see the different pledges of countries:

The body responsible for the new protocol had a huge success: They have an outcome!! But that was nearly all. There is now a draft text, which is basically written with brackets, so everything still need to be discussed. A draft text with which can be worked on with is what COP 20 in Lima has to deliver.

Decision was made that contributions of the parties to the post-2020 agreement are communicated by the first quarter of 2015, by those parties who are ready to do so. Ín Lima, Peru, the information requested from the parties to be provided for the agreement will be decided on. The EU was working on the decision on tighter schedule, but at least there is a roadmap, even though it is not as satisfying as it could be.

Loss & Damage was one of the last item discussed at the COP going over time and finishing on the Saturday. The discussions ended up being transformed into US vs Fiji/Philippines battle in the form of a very long huddle in the middle of the plenary. And in the end, the “developing” countries managed to get their ‘mechanism’ (which was a red line for them). However it was agreed as a compromise, that this new ‘Warsaw International Mechanism on Loss and Damage’ was going to be developed under the pillar of adaptation rather than as a third pillar (the other one being mitigation). This structure will be reviewed at COP22 in 2016 which unfortunately leaves little room to include loss & damage in an impactful manner in the Paris 2015 agreement.

This fund is expected to deliver 100 billion US-$ per annum from developed countries for developing countries. It was decided in 2010 in Cancun and had so called fast-start finance (30 billion US-$ all in all until the end of 2012). The Green Climate Fund is ready to operationalize since the 4th of December. There were discussions about mid-term finance from 2104-2016 proposed by G77, but no consensus was reached on this topic. The GCF remains as an empty shell.

This topics made huge steps forwards…if you like markets, you would say this. One of the major outcomes is the “Warsaw Framework on REDD+”. It puts REDD forward in a way, that it will be included in the Global Carbon Market, but there is not a real clue when this is going to happen. It ensures also strong safeguards for indigenous people and ecological systems. But apart from this, this Framework is also called “The Whatever-Approach” by NGOs, because a lot of things are still vague.

The civil society made another action the last day of COP19. Around 200 people went out in the football-arena and formed a “cheering section”. With a united voice they cried out “Stop climate madness!” and was heard in the whole conference building.