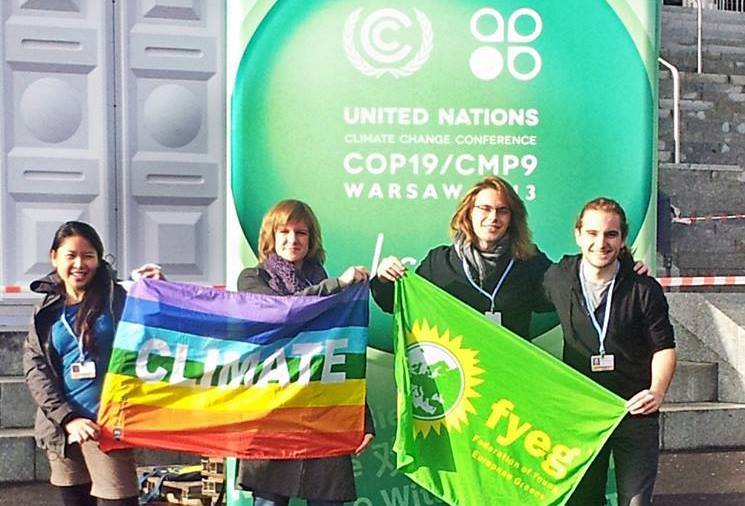 Every day, during the Climate talks in Warsaw in which young Green activists are deeply involved, the Ecosprinter will publish the daily updates written by FYEG delegation at COP 19, Shenna, Anton, Max and Anna. They will give us a precious insight from the inside talks, the mood in the plenary, the demonstrations and directions taken for the Climate Summit, while showing that much more than for anyone else,  Climate matters to youth .

FYEG’s delegation for the first week of COP 19, the Climate Talks of the UN  are Shenna, Anna, Anton and Max.

The last few days we have been at COY9/PS CEE actively participating, assisting the organizing team and  facilitating some workshops. To make this acronyms clear: COY stands for Conference of Youth and PS CEE Power Shift Central & Eastern Europe. During these skills share space, we strived to contribute in mobilizing the international youth climate movement and to connect with other youth for the COP  (COP is the acronym for Conference of the Parties, which is basically the Climate Summit).

There have been debates inside YOUNGO, the Youth Constituency of the UNFCCC regarding the invitation of Christiana Figueres to COY9, despite the fact that she would be giving a speech at the International Coal Summit. YOUNGO in the end sent a letter to say that Christiana should speak only at the Coal summit or at COY. In the end she chose the Coal Summit instead of Youth!

At COY/PSCEE, civil society groups and movements were brought together to prepare for COP21 in 2015 in Paris. FYEG is striving to be one of the bridges between various movements, young people and some decision-making bodies.

Movies were creatively produced to promote a shift to renewable energies or, in general, promote the reduction of emissions. Here is the link to the video : http://vimeo.com/79083291 . And guess who won the  race against dirty energies on behalf of youth? Spread like wild fire!

We also had several workshops and organized the YOUNGO Working-Groups.
But now it’s enough about the intro, here comes the content of the Conference of Parties 19.

As delegation we focused on topics, which might be important at COP. These topics are the following ones:

There are also points, which are highly critical and that we are following all together :

It is also important to note that this COP is happening in between two non-COP meetings, the IPCC-Report and the leaders’ summit in the United Nations General Assembly in 2014, which means, that a lot of things are influenced by both events.

As many of you might know, there was a horrible typhoon striking the Philippines. Today, at the opening session of the COP, Yeb Sano took a powerful stand. You can read a transcript of the speech here: http://www.rtcc.org/2013/11/11/its-time-to-stop-this-madness-philippines-plea-at-un-climate-talks/

There were also worries, that one more body of the United Nations Framework convention on climate change would not even be able to adopt an agenda. At the first pre-COP meeting this year, Russia, Ukraine and Belarus have been blocking the body responsible for implementation issues. This happened because the “principle of consensus” was ignored at the last conference in Doha. Russia had objections to the adoption of the outcome document for 2012, but was ignored and the document adopted. So, at the meeting in Bonn they did not want to adopt a specific agenda item, which defines how votes shall be going on. The problem: Normally, the specific paragraph of the UNFCCCs Internal Rules of Procedure, which is responsible for votes and decision is never being adopted, is only SEEN as adopted. Russia objected to these items in agenda at the pre-COP and therefore blocked a whole body in its work. But the above mentioned worries had been solved out, as the proposed agenda had an item, where especially these issues will be discussed. More will follow tomorrow !

PS: We will publish some background articles on www.ecosprinter.eu and also all following updates. The updates with links to the specific articles from that day will also be send around.